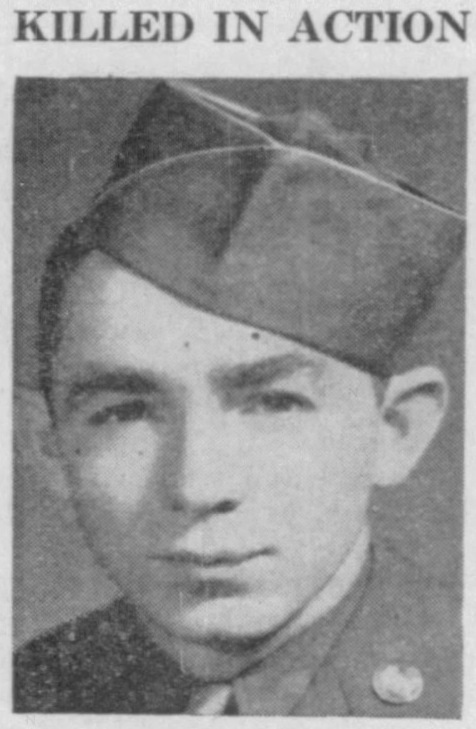 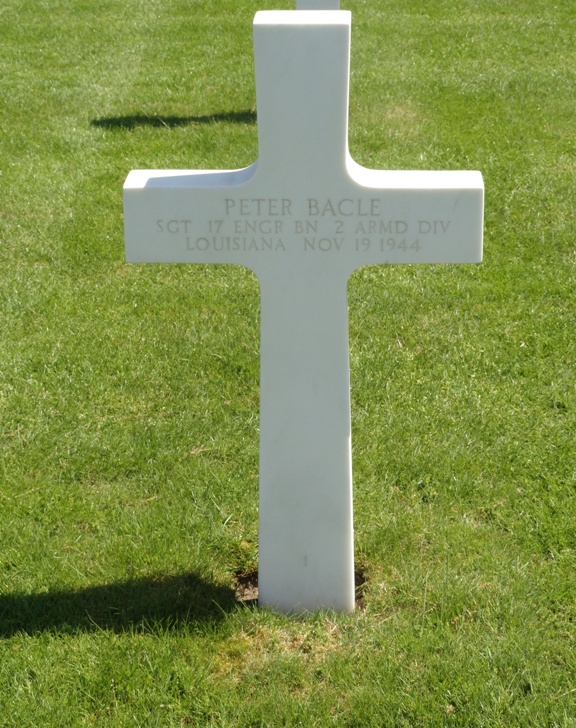 Location where Peter Bacle lived as an 8 year old boy in the year 1930: 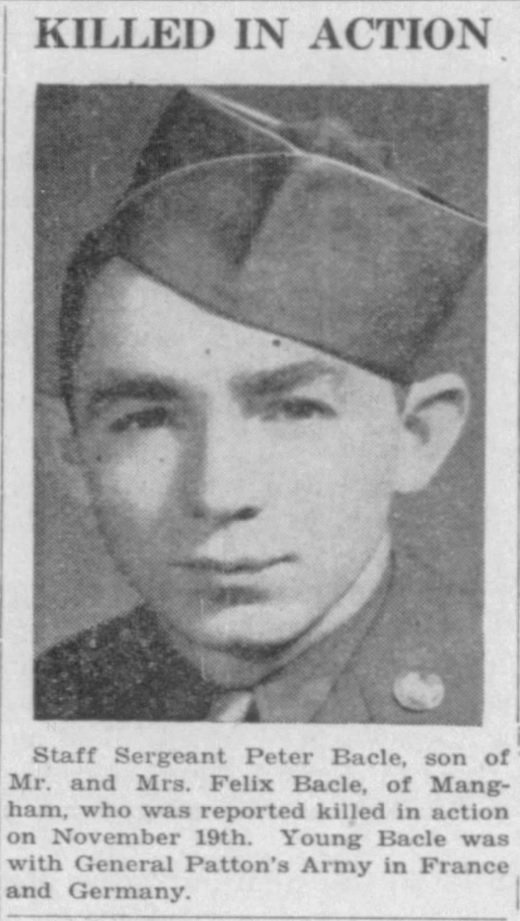 KILLED IN ACTION y Staff Sergeant Peter Bacle, son of Mr. and Mrs. Felix Bacle, of Mang ham, who was reported killed in action on November 19th. Young Bacle was with General Patton’s Army in France and Germany.

Staff Sergeant Peter ‘ Bacle Killed In Action
Staff Sergeant Peter Bacle has been reported as killed in action on Novem-ber 19th, according to word received Wednesday of last week by his par-ents, Mr. and Mrs. Felix Bacle, of Mangham. Sergeant Bacle was with General Patton’s army in France. and had been overseas 24 months. He was a veteran of the African and Italian campaigns, and was with the army which invaded southern France. He was attached to an engineering bat-talion. Sergeant Bacle was reared in Rich-land parish and was a graduate of the Mangham high school. The following newspaper article re-lates some of the exploits of the 2nd Armored Division. with which Ser-geant Bacle was attached: The Second Armored “Hell on Wheels” Division has been formally commended for its part in exploiting the break-through above St. Lo July 26th which resulted in the large scale movements that now have fanned out over France. I”In a letter to Maj. Gen. Edward H. Brooks, commander of the Second ‘Armored, Maj. Gen. J. Lawton Collins. commander of VI Corps, said in part: I”‘The Second Armored Division, along with other elements, broke through the German positions be-tween Marigny and St. Gilles on July 26, and the division then spear-headed the drive to the Seine River at Ceren-ces, thus effectively cutting off the German forces east and north of the Seine River. In this drive to the southwest, the Second Armored Divi-sion displayed remarkable dash and exceptional fighting spirit, and played a major part in expanding the break-through, which operation. I am sure, will go down in history as one of the decisive points of our war in France.’ “‘ 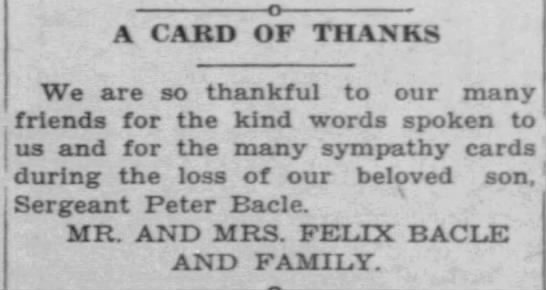 A CARD OF THANKS We are so thankful to our many friends for the kind words spoken to us and for the many sympathy cards during the loss of our beloved son. Sergeant Peter Bacle. MR. AND MRS. FELIX BACLE AND FAMILY.

When and where did the heroic act of Peter Bacle take place:

Is that he was on the 16 november 1944 a part of Taskforce X, 17th Engineers batallion, C company, 3rd platoon. That on the 16th november they had the objective too secure Immendorf on the left flank from the germans. Taskforce X was under command of Lt. Col. H. Reeves, and was accompanied by the 406th Infantry Regiment.

All troops moved forward to assembly areas during the night of 10-11 November and supporting artillery and assault-gun and mortar platoons took up indirect firing positions during daylight on the 10th. From 12 to 15 November the command was alerted for attack each day. However, it was not until 0040 on the night of 15-16 November that orders were received to attack. All units then moved to their jump-off positions, TFX assembling in Waurichen. Immendorf was the strike by one squadron of Fighter-bombers. According to plans, artillery preparatory fire began at 1215 hours.

Task Force X, from its assembly area in the vicinity of Waurichen, struck at 1245. Company E, 406th Infantry, attacking on the right flank of the battalions 300-yard front with tanks leading, attempted to envelop Immendorf from the southeast.

A battlemap we have from a unit history shows that they were coming from the south West of Waurichem, wich has a road directly too Immendorf. On the the outer edge of Immendorf they encouterd a large and dese minefield with so called Shoe mine’s. They were Holz and Reigel mine’s. Holz mines were made from wood and plaftics so they couldnt be located with mine detectors.
Then, as part of Task Force X de 17th engineers were called in when there were casualties in the minefield because of artillery and Mortarfire. The 3rd platoon evacuated 20 wounded soldiers from field under enemy fire. Then Sergeant Peter Bacle did his heroic action too save other and paid the ultimate price. By 1430 the mission was accomplised and the town was secured.
Peter Bacle was wounded badly and transported too the 53rd Field Hospital, at the town Heerlen in The Netherlands, where he died off wounds, three days later on 19 novemeber 1944.
(Source: internetlink no longer available.)

MAP OF THE MINEFIELD WHERE SERGEANT PETER BACLE DID HIS HEROIC ACTION:

Original battle map for November 16th, 1944, it shows the objectives and the attack positions of the 2nd Armoured division 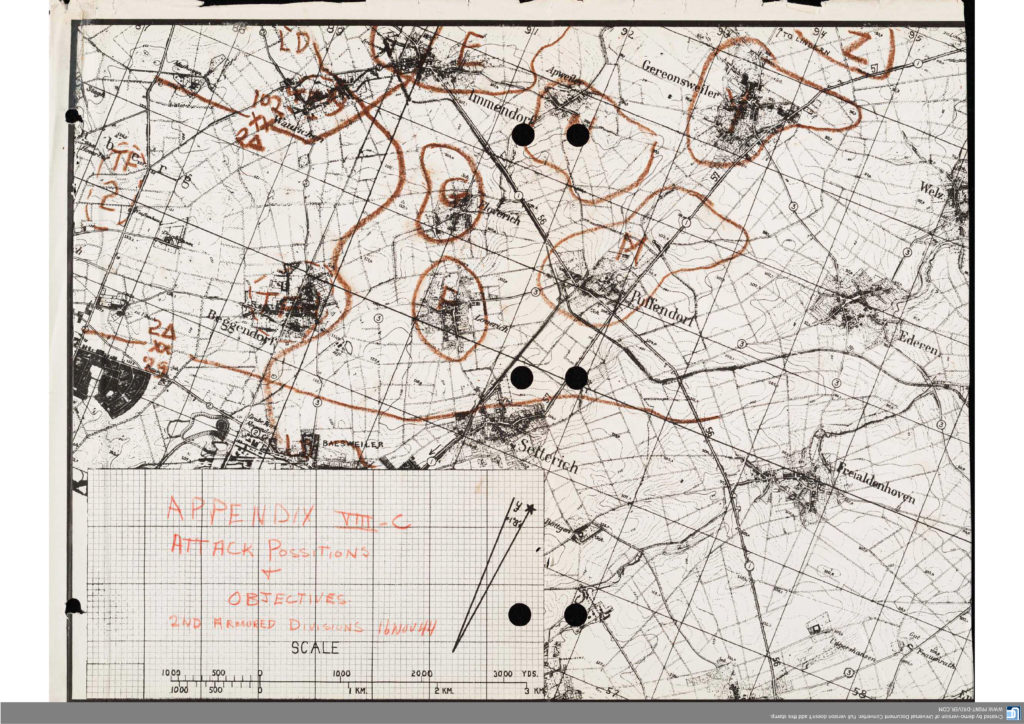 Detail from the original battle map for November 16th, 1944, the attack starts at Waurichem and the objective is Immendorf 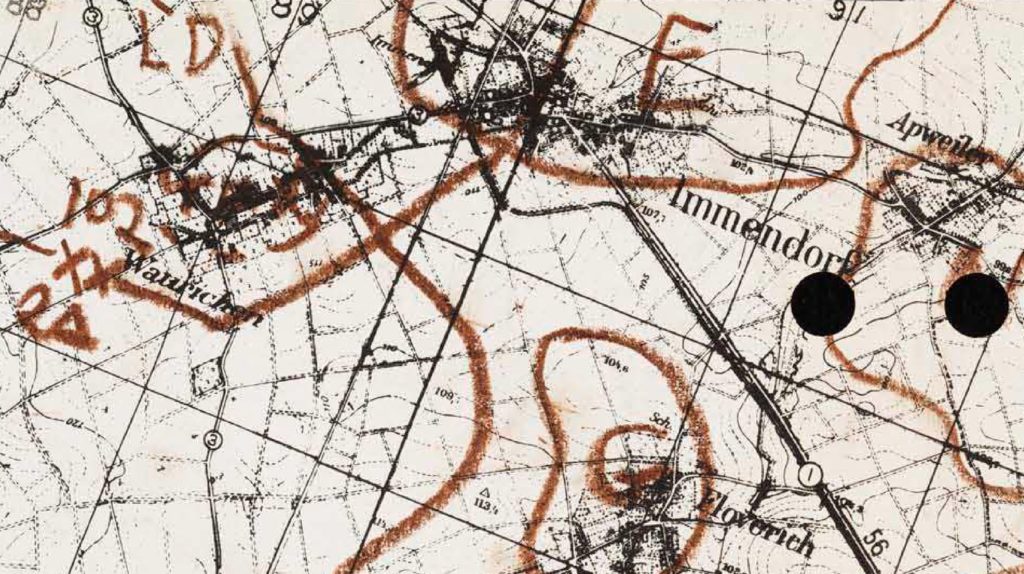 We have spoken with his brother in 2011,  Charles E. Bacle born in 1929 and living in Winsboro Louisiana,  and shared all the information we had collected through research, and he was touched.
Charles shared his memories with us about his brother Peter, Peter once said that if his leggs were blown off he did’nt want to live, and that is exactly what happend…..
Peter also made clear that if he would die, he wanted to be burried overseas….and he is.
Mr. Bacle put down the marker for him in Hewitt Cemetery just as a memorial.
(Source: “Interview with Charels E. Bacle by Martijn Brandjes in 2011)

Private First class David Edd Hiett was the one who blow the gap through the minefield. It left a deep impression because he wrote it in one of the letters to his wife.
But after the war David Edd Hiett talked about the event to his son Mark Hiett.

November 27,1944
Germany
Dearest Lucille,
I was surprised last night and got 2 letters from you. One was from June and had 2 pictures in it. I do not know about you but those were the first letters I had gotten in 3 weeks. I have not written because time does not permit. I did get a chance to send some Christmas cards. Right now I am getting a couple of days rest. We cannot fight all the time with out a little rest. Say, when do the people there think the war will be over? I do not know myself but I hope it will not be long.
I was only kidding about having babies. I like them fine. If I had not been such a fool maybe we would have one now. I guess we live and learn though. I have had some pretty close calls since I  have been here. A while back I made an attack with the infantry. Boy was that a hot job. I had to blow a gap through a minefield so they could go through. Now do you get the idea as to what I do? Sorry if I have upset you. It may be cut out anyway. You never have asked me questions, I sure have a hard time writing when you do not ask me something.
My pen got hit with shrapnel and there was not much left. I borrowed this one. I still have my watch and cigarette lighter. About this souvenir stuff. I do not want to make fun of anybody, but the stuff is no good. Any of it you could buy twice as cheap back there. We are not supposed to send this stuff from here anyway. It is all right back in France. Maybe I will send some junk later on. Still love me? I hope.
Oh yes, you had better get that side taken care of, see? It may go hard on you when I get back, If I do. The boys all liked your pictures but said you were probably going out with some 4F by now. I do not think so. I have got to go now. I love you till it hurts darling, so be good.
Love,
Edd

On your web site I was reading about Sgt Peter Bacle receiving the DSC posthumously for rescuing casualties from a minefield under fire November 16, 1944. It says the 3rd platoon of Co C blew a gap through a mine field with bangalore torpedoes so the infantry could get through and in the confusion many men cut the corner of the path and tripped mines. I am convinced my dad was a part of this action. His letter home on November 27, 1944 he writes he had made an attack with the infantry and had to blow a gap through a minefield so they could go through and what a “hot job” it was meaning intense combat. The story I remember him telling was he and a buddy had to push bangalores through the minefield under fire but the fuses he had would not work. He said the Lt. was yelling at them to fix it, people were dying, when someone else got them to blow. The men started going through the gap but some stepped on mines. He said there was one man badly wounded with his leg gone when a second man went to him and in trying to rescue him, he tripped a mine blowing his leg and groin off, killing the first man. At that point he and his buddy went and got the second man out and took him to the aid station. A doctor there told them to set the man off to the side and when my dad pressed the doctor to do something he was told there was nothing they could do for him, the damage was too severe and of course he later died. I think that man might have been Sgt Bacle. His recollection was when the second man got to the wounded man he was going to straddle him on his hands and knees and crawl out with the wounded man holding the back of his neck when his knee hit a mine. 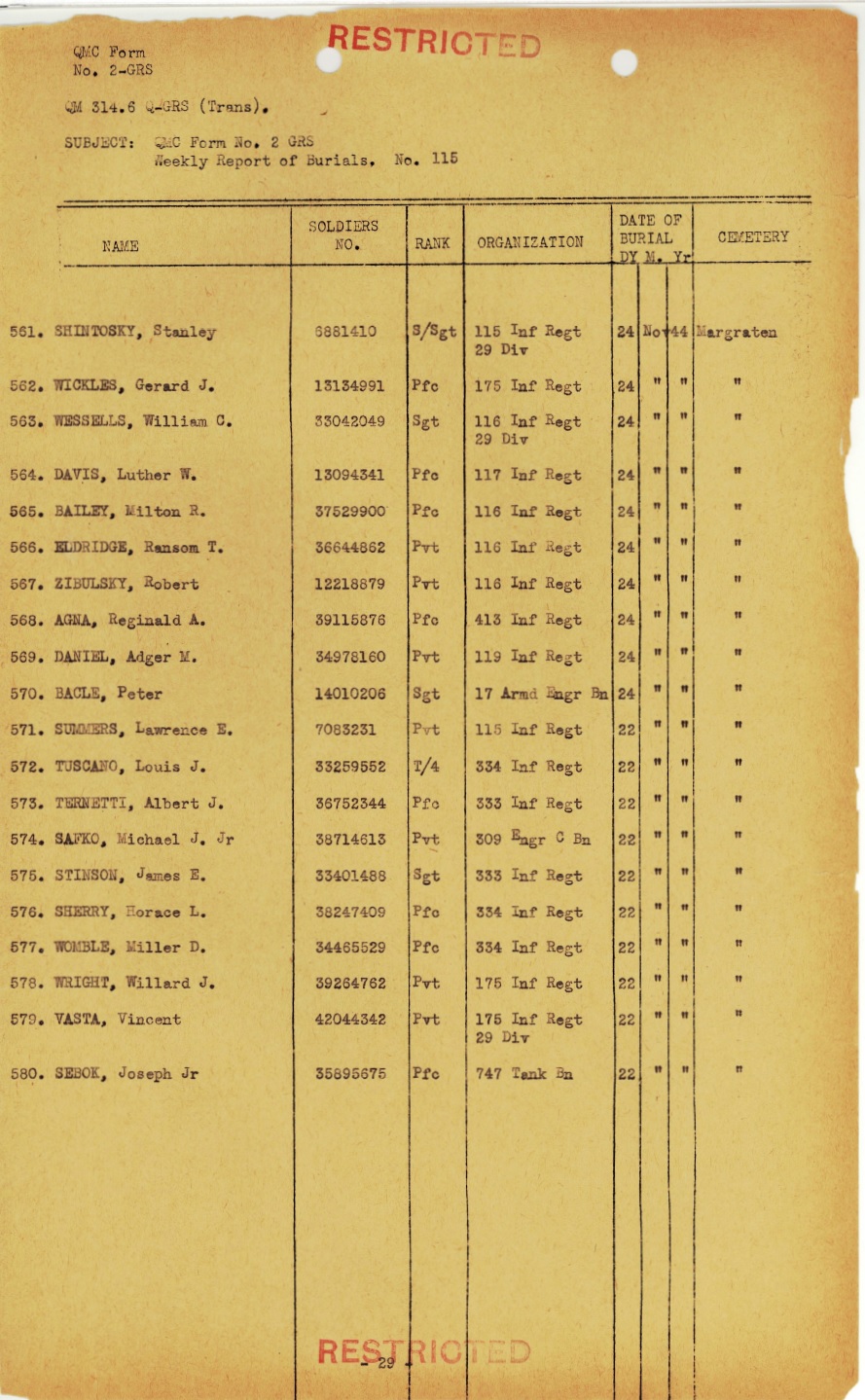 Household with his family where Peter Bacle lived as an 18 year old Farmer in the year 1940: 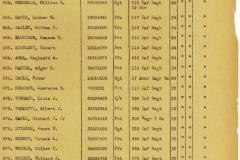 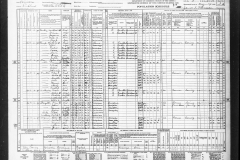 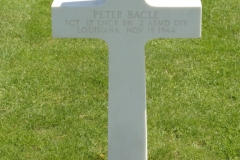 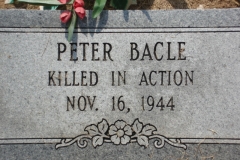 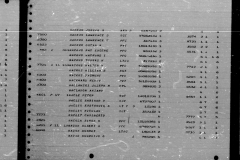 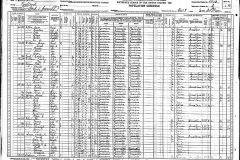