For more information see the full article about the Treadway bridge across the ” Rhine” on  23 March 1945 near Spellen, Germany)

At Maastricht Company E began on intensive training program to orient the unit working with it in the organization for and construction of the tread way bridge, as Co. “C’, 202nd Engr C Bn had no previous experience with this type equipment. For six days (with Co. “A“ 202nd Engrs attached during the training but later released), all personnel of Co. “E” did what they could to share their knowhow of the tread way with the men who would work with these on the biggest job yet to confront them. Twice practice bridges were build across the Meuse under simulated combat conditions, using artificial moonlight and fog. An airplane reconnaissance trip of the Rhine site was made by Capt, James E. McAdams, CO of Co. “E”, and selected NCOs. Orders came to construct the bridge, and during the early hours of 24 March, with Capt. McAdams Coing ahead to make a ground reconnaissance of the far shore, the trucks moved up to the Rhine in the vicinity of Weser.

After arrival at the site a change in instructions ordered the building of rafts to ferry vehicles across. This  was done. Enemy small arms fire, which had been fairly strong when the group first arrived at the area, now began to diminish, but incoming artillery was arriving with more frequency. Construction of the bridge, nevertheless, started at 0835 and work progressed in a very satisfactory manner, the reward of meticulous planning and hard labour. Artillery fire caused 20 casualties before the last float was worked into place 7 hours later. At 1530 the bridge was opened to traffic a 1,112 foot span completed in less time than any ether bridge across the famed barrier.

Shortly afterwards, however, the bridge was endangered when a ferry loaded with a tank broke loose from its mooring upstream and at 1630 drifted into the bridge, sinking itself and destroying nine floats. Several sections of tread way went under water. The engineers rushed to the scene and used explosive to break the damaged part of the bridge loose for repair and replacement. Enemy planes strafed the workers. but by 0200, 25 March the bridge again was open to traffic.

MARYLANDERS IN GERMANY:
Two Marylanders, one of them a Baltimorean, are mentioned in the following dispatch. On the Rhine, March 25.
The general estimated it would take 48 hours. The colonel said maybe it could be done in 36. The lieutenant colonel thought it might be done in 24. But a bunch of determined engineer GI’s and their junior officer sweating and swearing, did it in nine hours. They built the longest treadway pontoon bridge in the world, 1,146 feet across the Rhine south of Wesel, breaking every existing bridge-building record to do it. No army in the world ever built a bridge any faster – but the 202d Group of Engineers and the 17th Armored Engineers didt it. And under fire. “I guess we just were scared and wanted to get out of here in a hurry,” said Lieut William N. Doyble, of Kansas City, Mo. The known record for this type of bridge building is 250 feet in three hours. And these are under ideal conditions. Building a short bridge is nothing like building a long span across the Rhine. By this standard it should have taken at least thirteen hours. Among the engineers who helped build the span in record time were: SERGT. HENRY DEERING. 1308 North Bentalou street. Baltimore. PFC. GEORGE N. WEBER, Bel Air, Maryland.

(Edit 2: For more information see the full article about the Treadway bridge across the ” Rhine” on  23 March 1945 near Spellen, Germany)

Original photos of constructing the bridge:

Source: Facebook page WW2 RADIO by Henri Paul James
On the night of 23 March, Company E and C of the 17th Armored Engineer Battalion,
part of U.S. 2nd Armored Division, constructed treadway rafts to prepare the crossing of the Rhine River about five kilometres south of Wesel.
Bridge construction started at 9:45am and by 4:00pm the first truck crossed the floating Pontoon bridge.
Over 1,152 ft (351 m) of M2 treadway and 93 pneumatic floats were used in just six hours and fifteen-minute construction project,
record setting for the size of the bridge.
It took twenty-five 2-and-a-half ton GMC CCKW trucks to transport the bridge parts to the construction site, part of the Red Ball Express 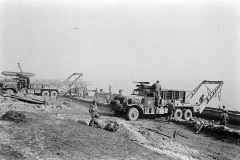 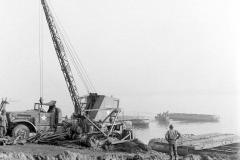 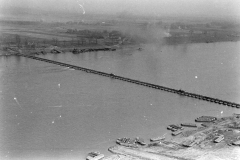 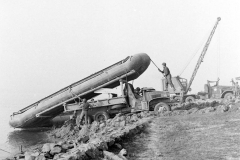 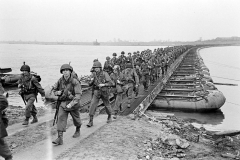 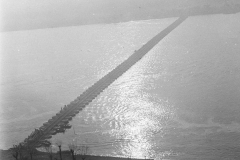 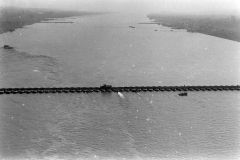 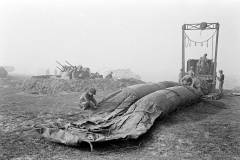 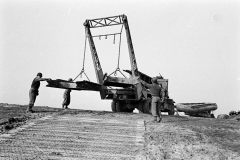 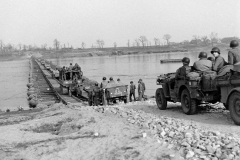 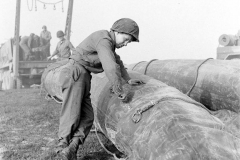 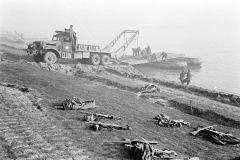 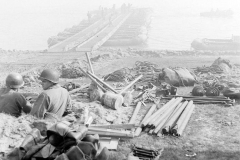 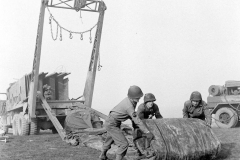 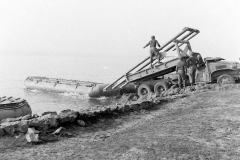 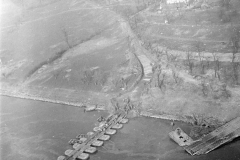 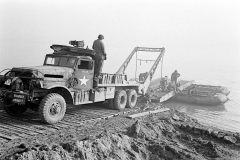 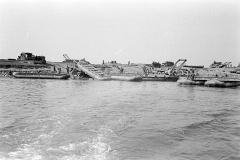 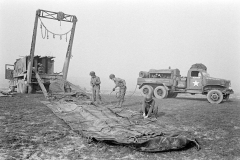 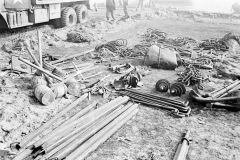