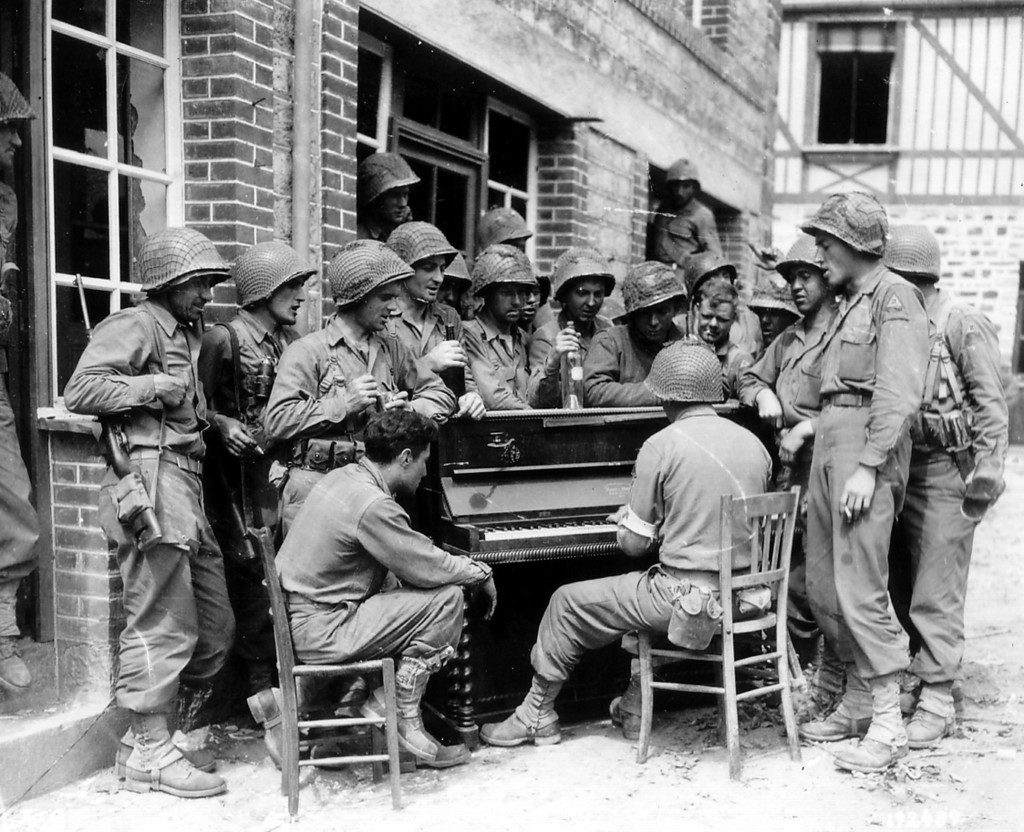 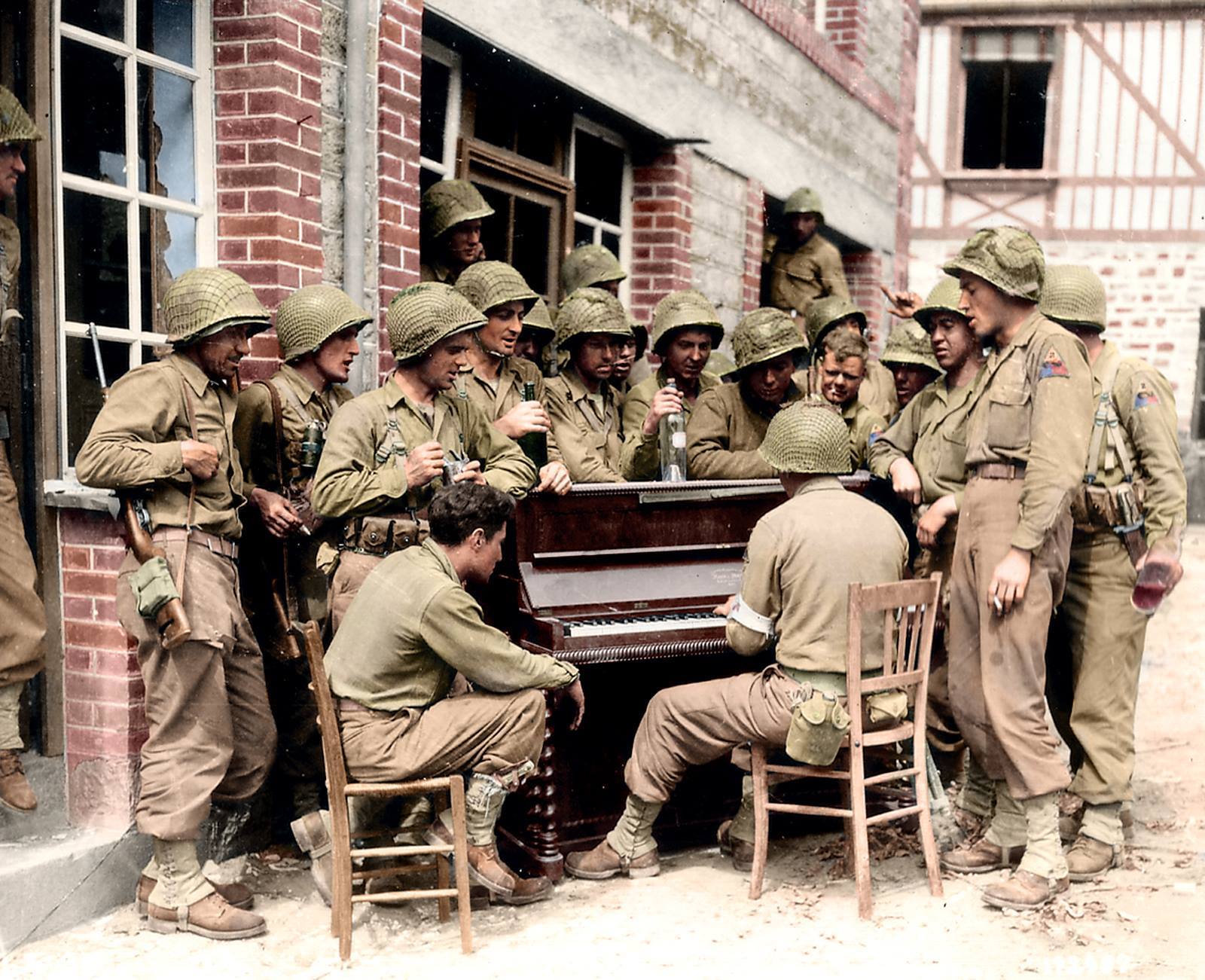 What is the story behind the photo?
What we see is group of Engineers of the 17th Armored Engineer Battalion, with 2nd armored patches , gatherd around an piano and they are singing the refrein “Going to Town“.
The song is probably by Mae West ” I found a new way to go to town ” 1933 an populair song known by many soldiers.
Click the playbutton below too listen too the music.

On 7 august 1944 the division continued its advance, leaving Company ”A” of the 17th Armored Engineer Battalion in the vicinity of Vire to assist in Combat Command C ”A”’s attack on that city.
Co. ”D”of the 17th Armored Engineer Battalion  with 82nd Recon was in the lead during the next push, followed by Combat Command ”B”, with Company  ”C” attached, and the remainder of the Battalion under Divisional Reserve control. 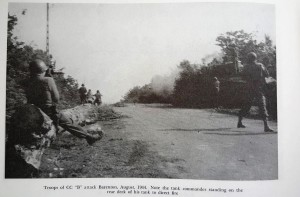 All Companies were employed as infantry in the area north of Barentan 8 August until 16 August.
This was one of the hottest areas yet reached. On august 8th, near Barenton, Company ”B” under Division Reserve sent its platoons in line on the West of town, and to the north Company ”C” had its platoons clearing mines, setting up road blocks, ands working with the Infantry . (source: Unit history of the of the 17th Armored Engineer Battalion)

The unit History tells us that the group Engineers could be one of all the Company’s from the 17th Amored Engineer Battalion, as they were all deployed in this area near of Barenton.

The Piano
The piano is from an brand called “Steinway”  and the model is an “Victory “Vertical”.

While World War II was happening overseas, the Steinway factory in New York City received orders to build wooden gliders to convey troops behind enemy lines.  Very few normal pianos were made, but many special Steinway piano models were built.  The Victory Vertical or G.I. Piano was one such model.  The Vicotry Vertical is a small piano, able to be lifted by four men, designed to be carried aboard ships or dropped by parachute from an airplane.  This allowed Steinway to bring pianos to soldiers. During World War II no more than a hundred pianos per year left the factory in Hamburg, Germany as the factory was American owed. In an air raid over Hamburg, the factory was hit by several bombs and was close to be fully destroyed. (source: Steinway & Sons facebookpage) 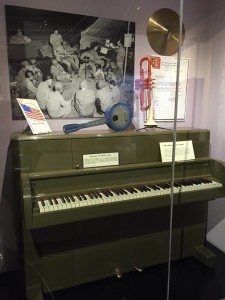 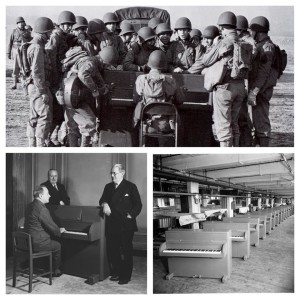 But as we look closely at the piano, we can see some candle holders and twisted “legs” under the paino, probably this paino is found in one the buildings and taken outside for bit of playing and singing.

The liberation of Barenton august 30 in 1944 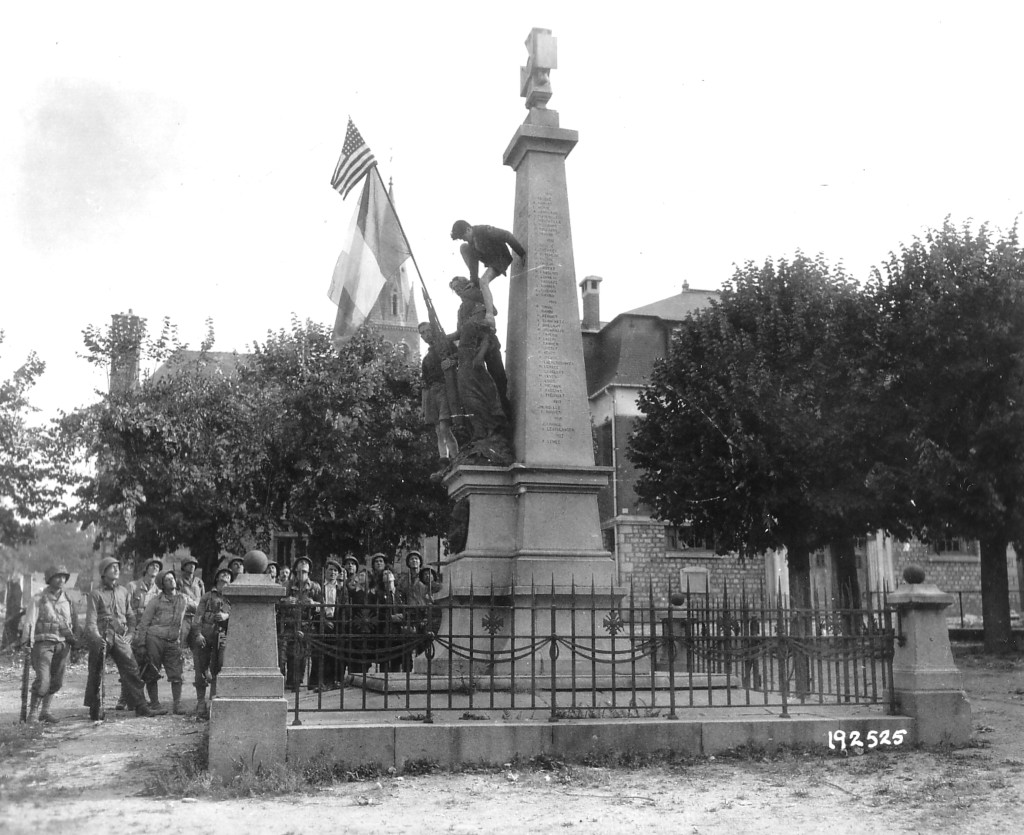 Three young people climb the Memorial at the townsquare de Barenton under the gaze of US soldiers and civilians. French flag and American flag mounted on the statue.