The invasion teams moved from Fort Bragg to ports of embarkation at Norfolk and New York in Early October, and after several hectic days of loading and waterproofing equipment, and with difficulty on one ship at Norfolk that started out to sea and had to turn back and have everything reloaded on another vessel, the Engineers assigned to the various teams joined the convoys bound for North Africa. Bound for Safia with CC “B” and elements of the 9th Infantry Division was Lt. Col. Hurley; Co. “A”, with Capt. Allen Jones, Lt’s Loyd, Ballard, Whiting and Crimmins, two platoons of Co. “D” under Lieuts Loughian and Grady Smith, and the 2nd platoon of Co. “C” under Lt. Conway. Co. “A” had its complete equipment, and also had a platoon from the bridge company, under 1st Lt Hargett, attached to them, and Capt Sutter and a few men from the medical Detachment were present for this landing. The line platoons of Co. “C” had their vehicles with them also, ands were to be used aqs assault platoons during the landing. The Platoons of Co. “B” and “D”, were to be used as landing and unloading parties, and therefore were dismounted. However difficulty in getting the ships in the harbours as planned and other problems that arose when the assault was made prevented everything from going as has been planned. Landings were began at 04:00 hours 8 November 1942 at the places along the French Moroccan coast near Casablanca, the ultimate objective, and despite hopes to the contrary, the French garrisons and Navy, and German Aircrafts put up quite a fight before the truce was signed a few days later.

Probably the stiffest opposition was encountered at Port Lyautey, 80 miles North of Casablanca, where men from the 9th Infantry Div landed and took the fort which overlooked the harbour with little trouble. Lt. Meredyth Hazzerd’s platoon from Co. “B” went ashore and spent the first afternoon and night unloading ammunition. Lt. Dill Christian, whose Co. “C” platoon also was to land, came ashore with his jeep and one squad of men. But the others were told to remain aboard and later unloaded at Casablanca. Likewise, Lieutenant Turners Co. “D” platoon, their ship torpedoed, were turned back and landed a few days later at Casablanca.

During the night of 9 November the enemy made a strong counterattack on the fort, retook it, and Lt. Hazzard’s platoon was alerted to act as Infantry in another assault on the fortress. Working on the left flank of the attacking force, the platoon helped to capture a Tug boat sitting in the river, then scaled the walls in face of heavy small arms fire, and went with the infantry into the fort where the French garrison of 300 surrendered. The Force was reorganised, and the Engineers joined in the job of cleaning out a nearby native village of snipers, during which Pvt Richardson was wounded while trying to capture an enemy machine gun nest. With the village cleared the force moved to high ground overlooking an airfield, where Engineers dug in defensive positions and remained until the truce was signed. Both Lt. Hazzard and S/Sgt Fink, the platoon Sergeant, as well as Pvt Richardson were awarded the Silver Star for their actions during this engagement. The platoon had captured at least 100 PW’s.

At Fedala, 16 Miles north of Casablanca, the platoons to land where those of Lieuts Mc Adams and Kelly of Cc,. “B” and Lt. Rawls of Co. “C”’, They remained at Fedala only a short time, however, and went back aboard ship and landed finally at Casablanca. During this time they were under fire from enemy planes and submarines, but suffered no casualties.

After a truce was signed the division began to reassemble. Lt. Col. Hurley was made acting Provost Marshal, and with a platoon from Co. “D” as guards, made a enclosure to hold the captured Prisoners of war. Lt. Hazzard during this period accompanied a patrol of the 82nd Rcn Bn on a 280 mile trip through Mecnes, Fez and the Taza Gap to check roads and sound out the attitudes of civilians and French troops which had not taken part in the fighting. This Reconnaissance lasted for four days, with hourly reports given to a Catalina Flying boat, but although two French regiments were met, everyone was friendly.

The combat teams assembled near Casablanca and then marched to the “Cork Forest”, 14 miles northeast of Rabat, home of the Sultan and the Capital of French Morocco. There a provisional Engineer Bn was formed until the remaining troops, who had sailed from Fort Dix to land at Casablanca on Christmas Day (which they celebrated with “C” Rations), came to join them in the wooded bivouac 6 January 1943.

With the Division assigned the mission of guarding the border between French and Spanish Morocco, the Engineers began performing garrison services )water Supply, road and construction work’, and carrying out intensive training, which included numerous hikes and combat problems. A group of officers and men volunteered from the Bn to go to the 1st Armored Division as replacements for losses in the Tunisian fighting. These were replaced in the Battalion on 5 March, and the new officers and men were given special training for a short period before being assigned to companies.

The battalion conducted a Mine School for all Officers and NCO’s of the Division with a large variety of enemy mines and booby traps collected from Tunisia (Lt. Christian made a trip there with a truck to collect part of then), a well planned course was given to instruct in “recognition and disarming of mines, and problems of gap clearance and road clearing techniques were presented so that other arms other than the Engineers would know how to handle mines. The school was quite effective in making everyone “Mine conscious”, out was marred when accidental explosions caused by students injured several others.

Capt. Bentley and a group of NCO’s from each company were send to Tunisia and attached to the 16th Armored Engineer Battalion as observers. Another group of Officers and NCO’s went to the vicinity of Oran, Africa to attend the newly opened Invasion Training Centre.

Life in the “Cork Forest”, however, was one enjoyed by all in off-duty hours. Tents were pitched in the woods, and what seemed to be a contest in making each one the most comfortable and elaborate took place, until an order limiting their height was issued. The native “Arabs” where a continual source of curiosity, with their donkeys and the occasional camel being loaded with a immense pile of cork bark or brush, and the living quarters of the poorer ones resembling a straw pile. A few natives hawked reed mattresses, leather goods, eggs and chickens from roadside stands in the forest, and in the markets of nearby Rabat where the soldiers spent afternoon passes. The purchase of souvenirs, food and wine soon brought en an inflation of prices but never the less was a source of pleasure. The colourful costumes of the Sultan’s guards and well to do Moroccans, the veiled women, the contrast between the modern architecture of the French city and the ancient quarter in the wall enclosed native and Jewish quarter was a panorama that hardly seemed real to the Americans. With the ”Vino” cheap and plentiful, the men had night]y feasts by by their pup-tents, frying eggs or chickens over coke fires, and stumbling through what all will swear was the darkest place on earth to find their beds. The men soon acquired chickens of their own, and rooster fighting was taken as a pastime on Sunday afternoons. At night the movie ground out its ration of film in an open space between the companies’ bivouac, while the audience sat down with a bucket of coke glowing to keep them warm when the weather was cool.

Edit 7: 17th Engineer Gordon J Ketchpaw doing his laundry during the Nort African Campaign. Using his helmet as a water bucket and standing in his Long Johns underwear.

Read more about the Officers of the 17th Armored Engineer Battalion

In April preparations were made for the divisional move to the vicinity of Oran. On 6 May 1943 the Battalion less Companies “A” and “C” began the long road march, travelling 193 miles the first day to reach Taza, 142 miles to Oujda, French Morocco the next day, made 108 miles and bivouacked at Sidi-Bel-Abbes, Algeria on 9 May, and on the fourth day travelled 52 miles to St. Cloud, which was 25 miles southeast of Oran, Algeria. Remaining there until May 20, on which date Co. “C” rejoined the Bn, the unit moved into the field two miles south of Port Aux Poules, 20 miles away. 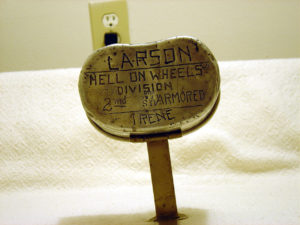 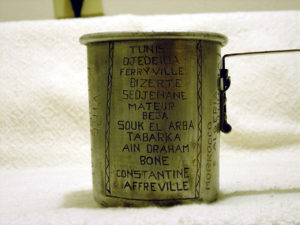 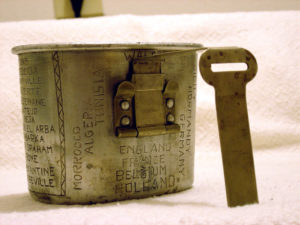 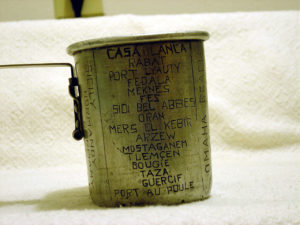 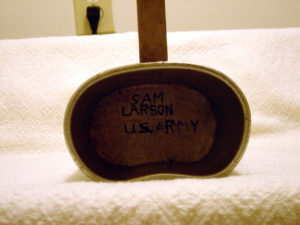 Here the preparations were being made for the Sicilian invasion. Bivouacked on open hill-sides in what became known as “Rock Hill” or “Mosquito Hill”. The mosquitoes, wind and dust combined with the hot sun to make life unpleasant, but passes were given into the nearby cities of Oran and Mostagnum to enjoy leisure hours. During the days training was carried on, all line platoons going through the different, problems of the Invasion Training Centre, in breaching shore obstacles, attacking pillboxes, gaping minefields, and in street fighting. Later these platoons took over the problems and taught them to other units. Then began the splitting up of the Bn for the coming operation, which, if to be followed with continuity, must be recorded separately.