The entire Second Armored Division was stationed at Tidworth Barracks and this Bn was quartered in the Jellalabad block of the Barracks, sharing the Jellalabad 0fficers Quarters with Officers from the 82nd Armd Rcn. Battalion and Co C of the 48th Armd Med. Bn. The quarters though crowded and of ancient design were clean and furnished to include placed fires in the open fire places. These permanent quarters were most welcomed by all as it was the first time the majority had slept in barracks since leaving Fort Benning, Georgia 1 July 1942. The Latrine and messing facilities were inadequate due the fact that they are forced to accommodate the number of men for which they were designed. Companies had to combine their messes and lengthen the feeding time. After repeated inspections and numerous fatigue details the men often pined for the ”Good Old Days” in the field.

This Bn was made responsible for the maintenance of the Utilities of the entire Barracks, which was quite a headache due to the existing plumbing, odd voltage lighting system, and black out restrictions, also the fact that all materials had requisitioned through the British. This detail was ably cared by Lt. Cline, T-Sgt Berry and a permanent detail of about ten enlisted men. Additional details were drawn from the Bn and this finally resulted in rotating companies weekly and letting an entire company devote its fin time to road maintenance and odd construction details.

The Civilian population in England ranged from indifferent to most cordial; The recreation facilities at the Barracks while crowded were varied and well attended. The Tidworth House Red Cross was the most popular. Trucks carried men daily to the nearby towns such as Andover and Salisbury where they could spent the evenings from 1600 to 2230. During the period 15 Dec. 1943 to 1 May 1944 up to 7% of the officers and men at one time were granted 8 day furloughs enabling them to visit varied places in the UK. 48 hour passes were also given. Hospitality trips to civilian homes for Sunday tea were available post weekends. At the end of their stay in England most men knew as much about London as they did New York.

During the period 28 November to 10 December 1943 the Battalion reorganized, re-equipped, performed maintenance of vehicles, clothing and equipment, did physical training and usual duties of an Engineer Battalion in garrison. Most of the Vehicles with the exception of 2½ ton trucks and special Engineer Vehicles were already in Tidworth on the Battalion’s arrival. Engineer and other equipment was stocked in the various depots earmarked for this unit and it was only necessary to secure the release of these items and the transportation to deliver them in order to fully equip the unit, Through the efforts of Lt, Col. Rogers, Capt. Rarick and Capt.Hall this was accomplished in a very short time. There was a considerable delay in the arrival of the Brockway bridge trucks that had been shipped from Sicily as they went by way of Italy, then were dumped off again in North Africa for a long period before arriving in England by way of Ireland. The Bn in the meantime drew replacements for these Brockway trucks and though Col. Rogers put up quite a struggle to keep the replacement trucks it was finally necessary to return them all. The Bn was entirely re—equipped in England with the exception of the Brockway trucks, kitchen and office equipment.

During the period 10 December 1943 to 6 Febuary 1944 the Bn conducted extensive training in fixed and floating bailey bridges, tread way bridges, and foot bridges on the Thames River at Hallingfor and with the heavy Pontoon bridge at Stroud. This was accomplished by sending one company at a time to these sites for a period of four to seven days where they constructed each type bridge once in the daylight and thereafter at night under very difficult weather and terrain conditions. The company’s remaining in bivouac conducted training on dry land with the special Bailey and fixed Timber Bridge sets procured from Army in addition to the regular garrison type training. 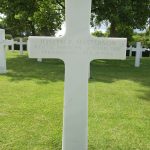 The minefield had been placed during the Battle for Britain period and consisted of sixty-three beach type-C British mines. These mines were buried and each consisted of approximately 20 lbs. of explosive and was fitted with very sensitive firing device so as to be either AP or AT mines. They had deteriorated to such an extent that similar mines in nearby field had been detonated by dogs running across the field and in some cases for no apparent reason at all. To make matters more complicated, the record of the minefield consisted only of a sketch with dimensions with no Azimuths or even a North arrow. These mines were successfully removed by locating with a mine detector, marking, and then detonating the mines in place a few at a time. Sgt. Regor and Sgt. Walker (edit3) were recommended for the award of Legion of Merit for this operation.

(Edit 2: Sergeant Gordon F Walker who was recommended for the award of Legion of Merit was killed in action by an enemy ambush with machinegunfire)

The construction of a road to the bridge site presented a real problem due to the marshy condition of the soil and the almost continual rain. It was necessary to construct a new road of approximately one half mile in length. When the construction started the ground was fairly dry and a six inch layer of gravel was tried. Before this was complete the road began giving way. A layer of large rubble was tried and this too soon san out of sight. Finally it was necessary to remove the top soil to a depth of four feet, place pierce steel plank over the entire length of road and then cover with a six inch layer of gravel.

On 1 May 1944 the Battalion departed from Tidworth for temporary change of station to various marshalling areas near the southern coast of England in the vicinity of Dorchester. It returned to station at Tidworth on 6 May.

During period 7 May to 5 June 1944 the Battalion prepared for overseas movement. All vehicles were waterproofed and loaded for combat. Each line Company was equipped with a Tank Dozer and Hq Co received a D-7 Angle dozer with prime mover and 5 Crabs as special authorization.

Read more about the: “Officers of the 17th Armd Eng Bn”