One of our members, Sidney Hesselberth, has managed to acquire a great part of the letters and enveloppes written bij James Patrick O’Dwyer, we know that the other part was sold trough auction by others.
We have letters from 1942 to 1945 so we have a unique full picture of his experiences during his active service with the 17th Armored Engineer Battalion trough Africa, Sicily and Europe.
From the day he starts at Fort Bragg to the VE day in Berlin.

We scanned all the hundreds of letters and transcribed them with the help of members from our association MARS, this asks a lot of time but we think it is worh it.

The letters were examined by the Army Examiner, that was de platoon commander op Company E of the 17th Armored Engineer Battalion: xxxxxxxxxxxxxxxxx

He also does his greetings to “Jay” and “Bill“, Bill is the brother named officially “Billy”. We are not sure who is being meant by  “Jay” is could be the husband of Amelia, the sister of Maxime.
See for the familynames the US Sensus of 1930 below.

The adress where the letters were send to is the house where Maxine Steed lived during the war:

This is the house in present time: 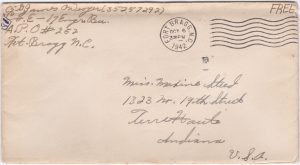 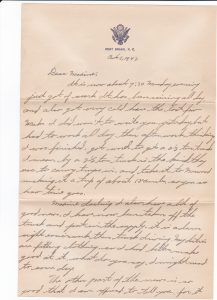 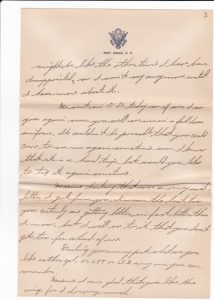 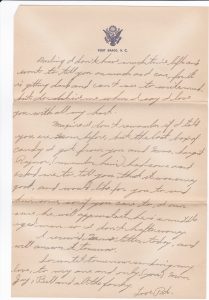 It is now about 7:30 Monday evening just got of work. It has been raining all day, and also got very cold here the last few weeks. I did want to write you yesterday but had to work all day. Then after work, thinking I was finished, got word to get a 2 ½ ton truck I mean by a 2 ½ ton truck is the kind they use to carry troops in, and take it to Norwood making it a trip of about 120 miles, so you see how time goes.

Maxine darling I also have a bit of good news. I have now been taken off the truck and put in the supply, it is a down right easier work then truck driving. My duties are fitting clothing, so I had better make good at it. What do you say. I might need to some day.

The other part of the news is so good that I am afraid to tell you, for it might be like the other time I have been disappointed so I won’t say anymore until I hear more about it.

We went in O.D. today so if ever I see you again soon you won’t see me in a full dress uniform. It couldn’t be possible that you could come to see me again sometime soon. I know that it is a hard trip, but would you like to try it again sometime.

Maxine darling that was a very sweet letter I got from you, I mean the last two you certainly are getting better, in fact better then I now, but I will see to it that you don’t get too far ahead of me.

Darling you may put whatever you like either cpl, of C5T or C5G, any one you can remember.
Maxine I am glad that you like the ring, for I do very much.

Darling I don’t have much time let and want to tell you as much as I can, for it is getting dark and can’t see to write much, but do believe me when I say I love you with all my heart.

Maxine I don’t remember if I told you ore Mom before, but the last bit of candy I got from you and Mom, Sergeant Rayner, (remember him) had some and asked me to tell you that it was very good, and would like for you to send him some, so if you care to, I am sure he will appreciate it, he is a middle aged man so I don’t haf to worry.

I received Moms’ letter today, and will answer it tomorrow.

So until tomorrow sending my love, to my one and only, (you) Mom, Jay, Bill and all the family.