Phase II – From the Rhine to the Elbe

Assignments for the coming operation placed Co “A” with CC ‘A”, Co. “D” with CC Co. “C” with CC “R”, and Co. “R“ under Bn control, The division was to cross the Rhine on the 9th Army bridgehead near Wesel, push through the infantry and airborne divisions securing the bridgehead, and drive towards Berlin, with several intermediate objectives. 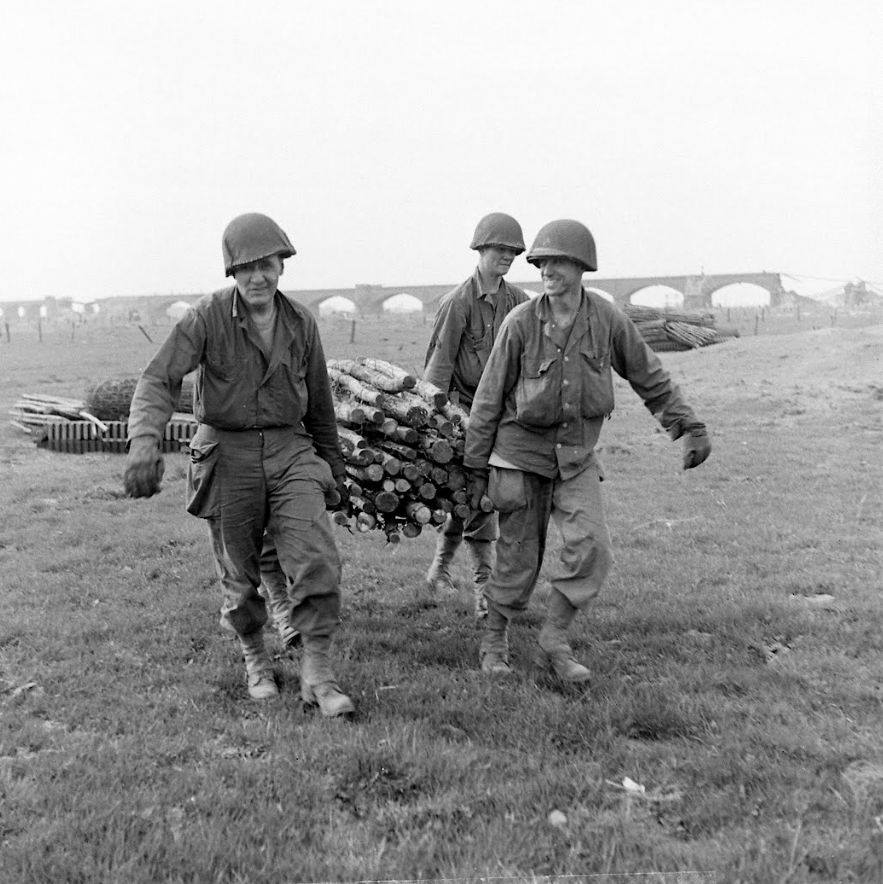 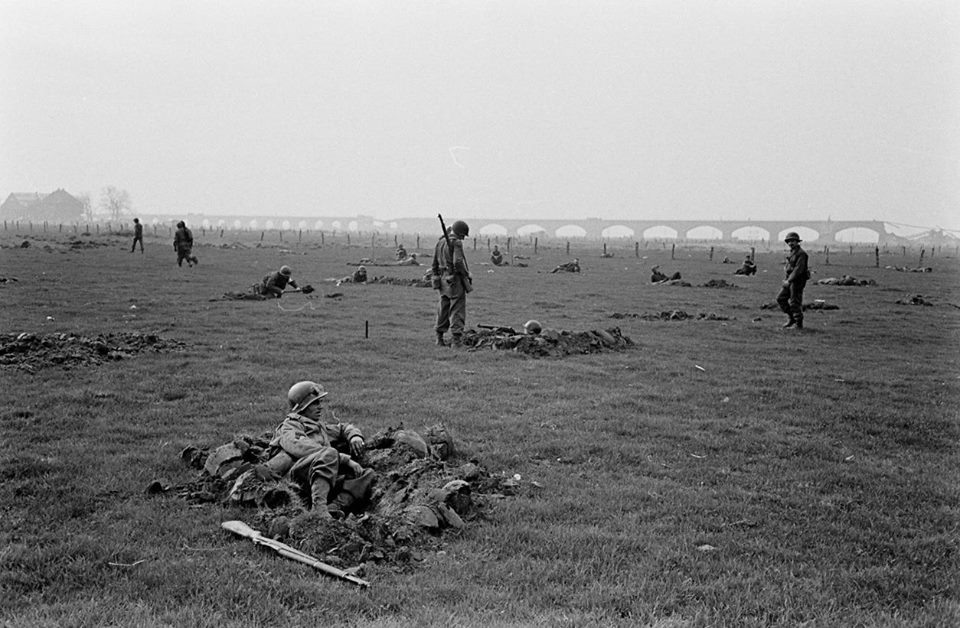 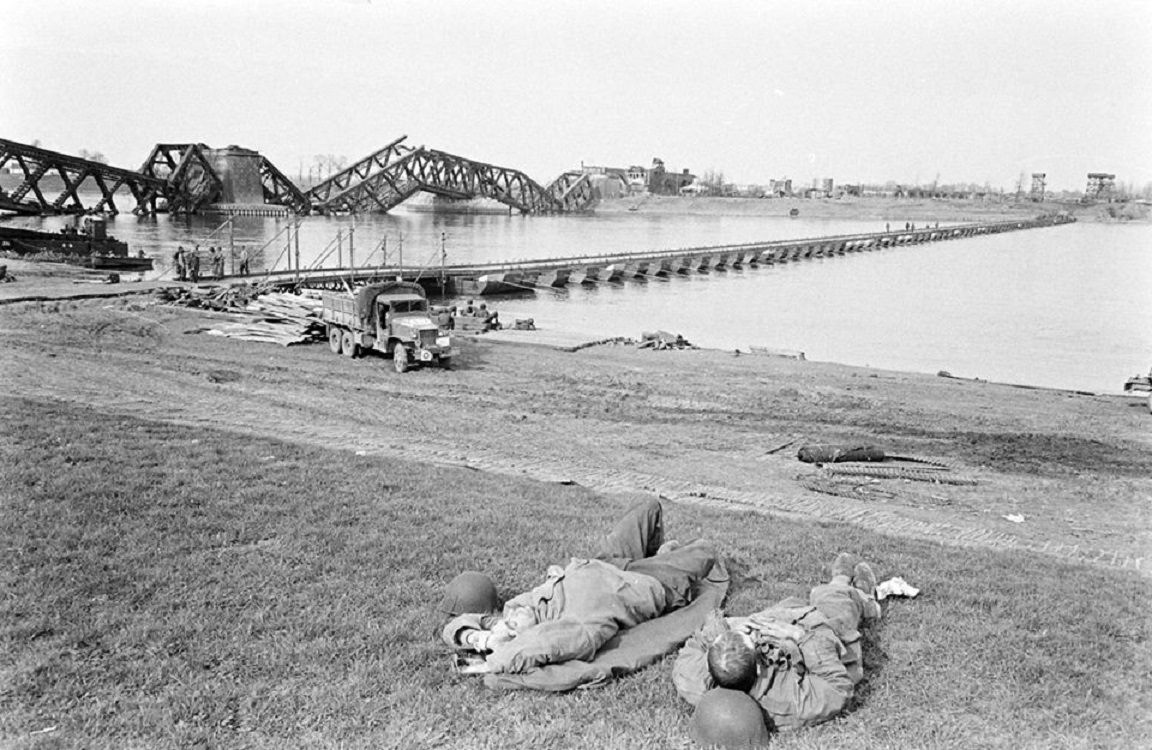 Companies left Schiefbahn to join their Combat Commands 27 and 28 March, and after an overnight halt, before the bridge, began crossing the Rhine. Co. “A” being with the leading  column was the first to cross at 0915 28 March, the remainder of the Bn crossing the 29th. 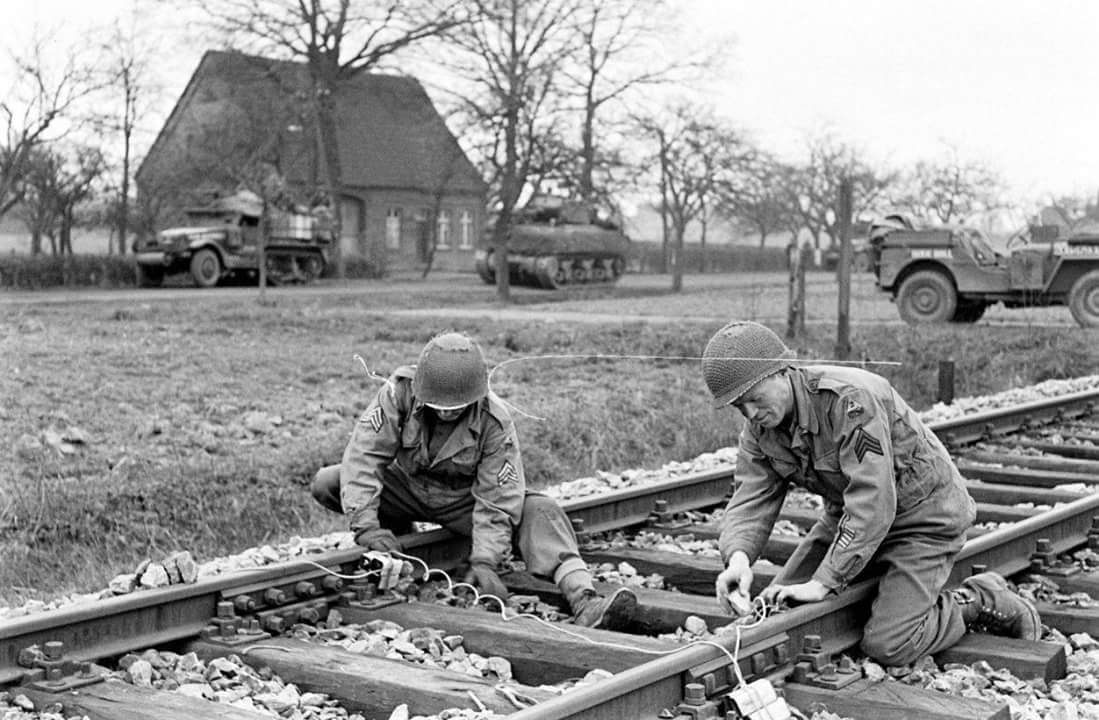 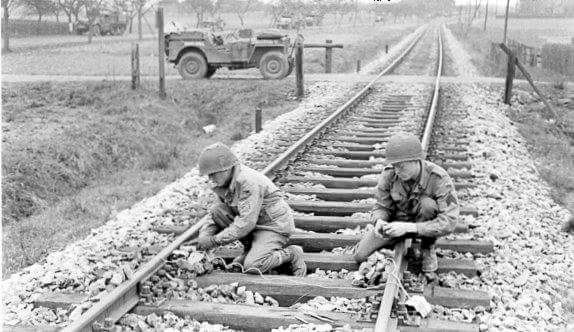 Engineers of the 17th Armored Engineer Battalion, 2nd Armored Division planting TNT charges to cut rail line outside Lippstadt, Germany April ’45.
There jeep waits at the nearby crossing and a line of Divisional or Battalion vehicles stand on the backround road. (Source: Paul M James) 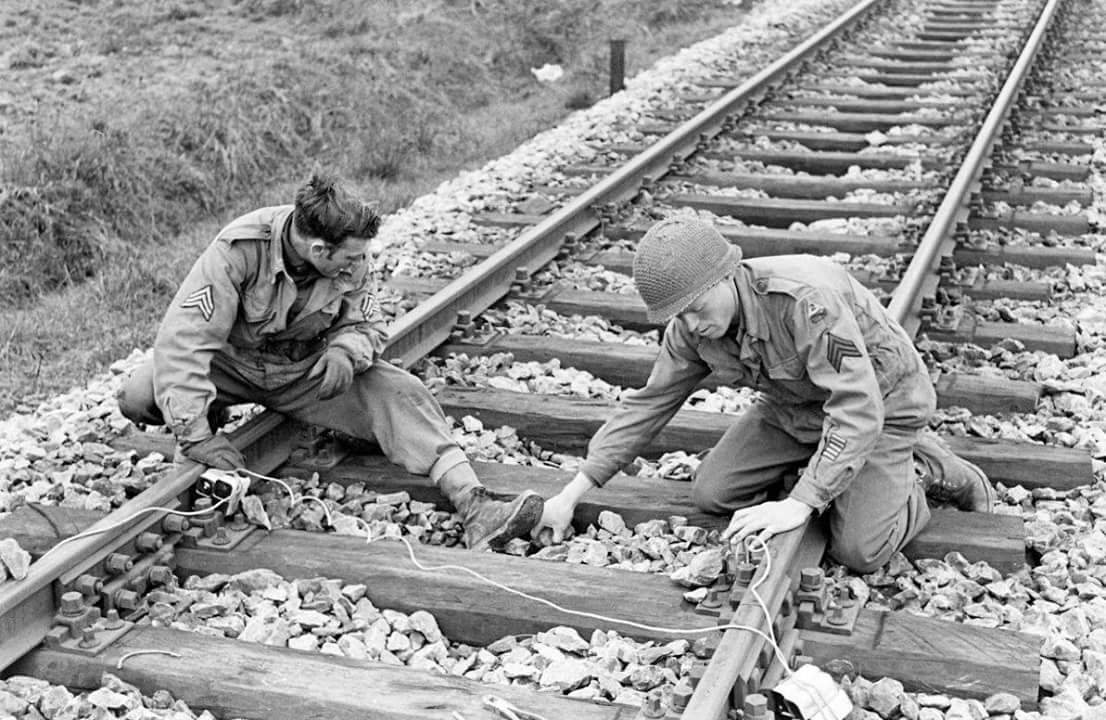 Little contact with the enemy was met the first few days across the Rhine and most of the time was occupied in moving with the various columns over heavy—trafficked roads. As CC “A“ was operating on the right, to move south required the construction of a bridge over the Dortmund-Ems Canal. The 1st platoons of both “A” and “B” companies worked on this, building a 144 foot tread way on 30 march. 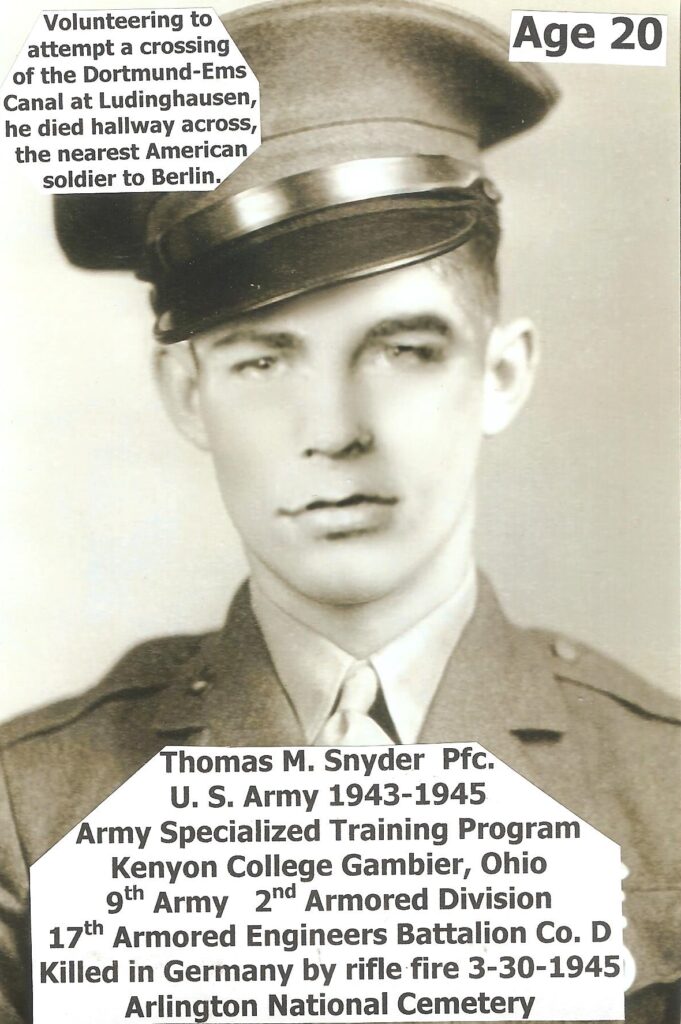 CITATION:
(Citation Needed) – SYNOPSIS: Private Thomas H. Snyder (ASN: 15121676), United States Army, was awarded the Distinguished Service Cross (Posthumously) for extraordinary heroism in connection with military operations against an armed enemy while serving with Company D, 17th Armored Engineer Battalion, in action against enemy forces on 30 March 1945. Private Snyder’s intrepid actions, personal bravery and zealous devotion to duty at the cost of his life, exemplify the highest traditions of the military forces of the United States and reflect great credit upon himself, his unit, and the United States Army. 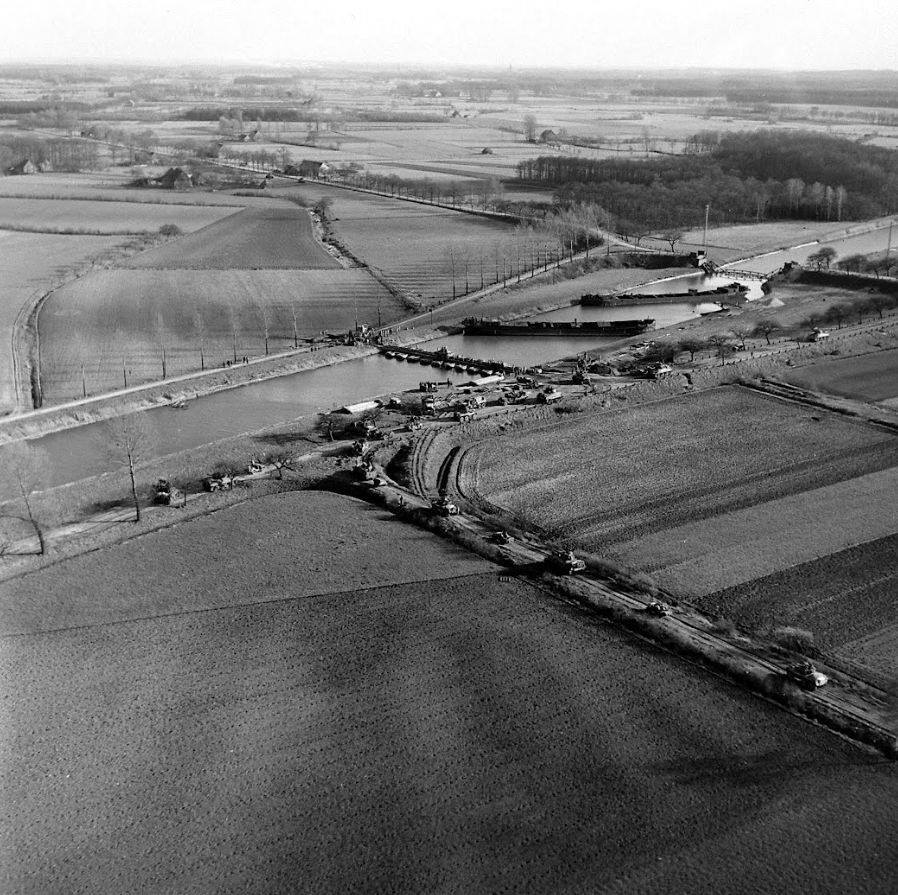 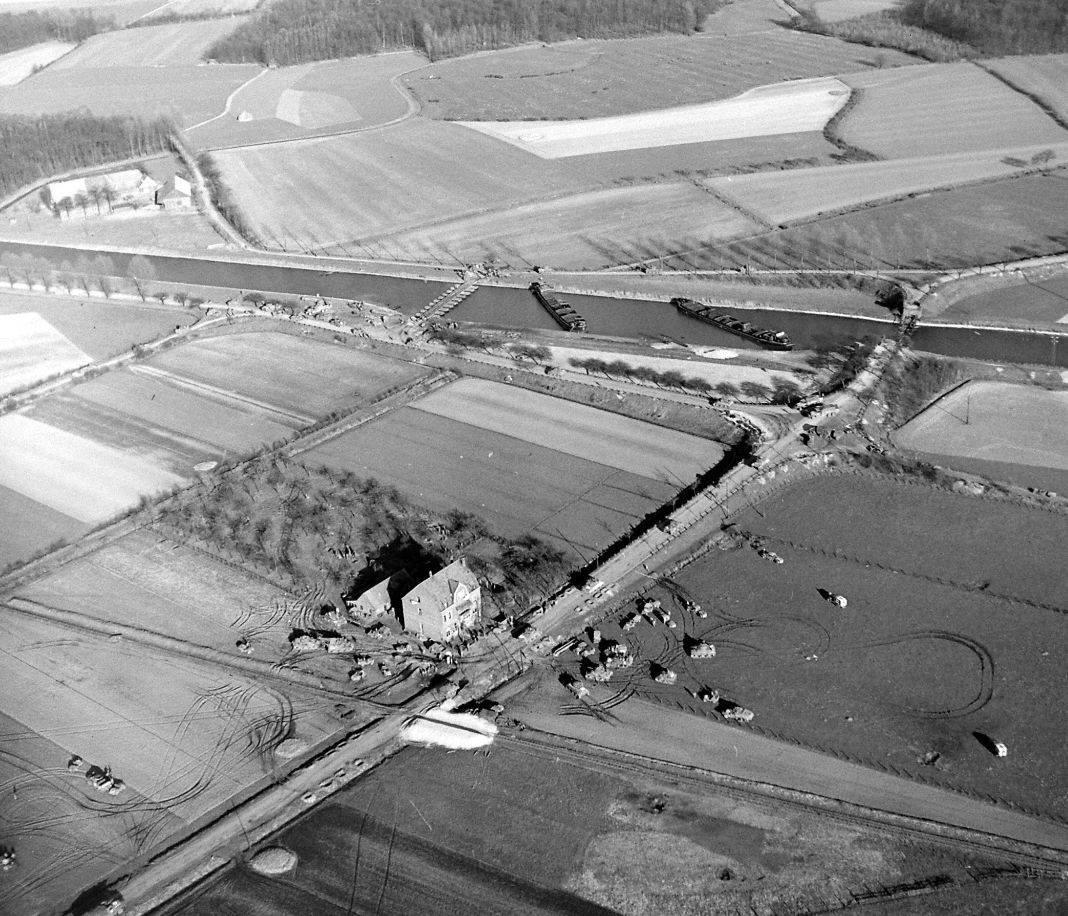 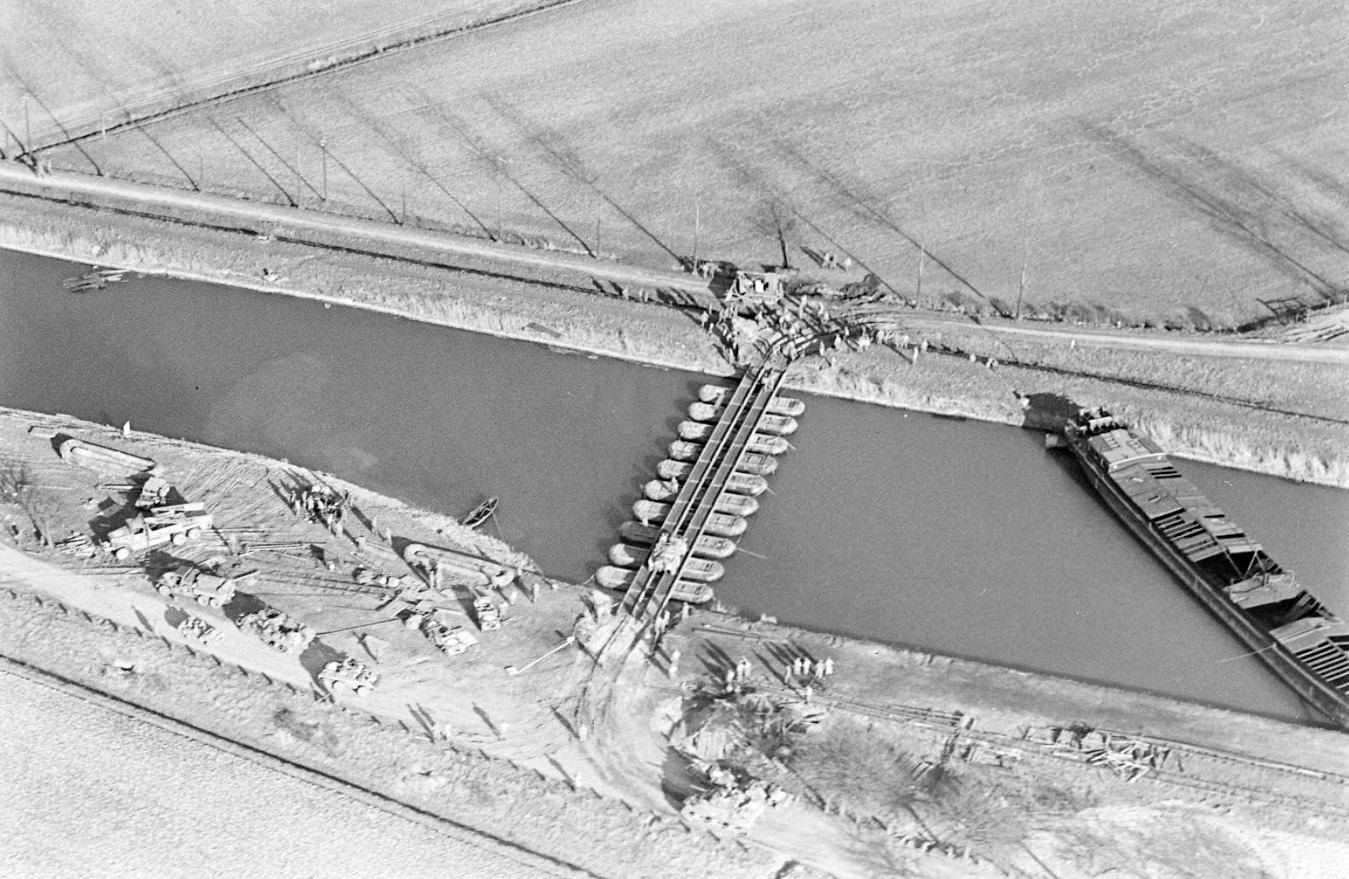 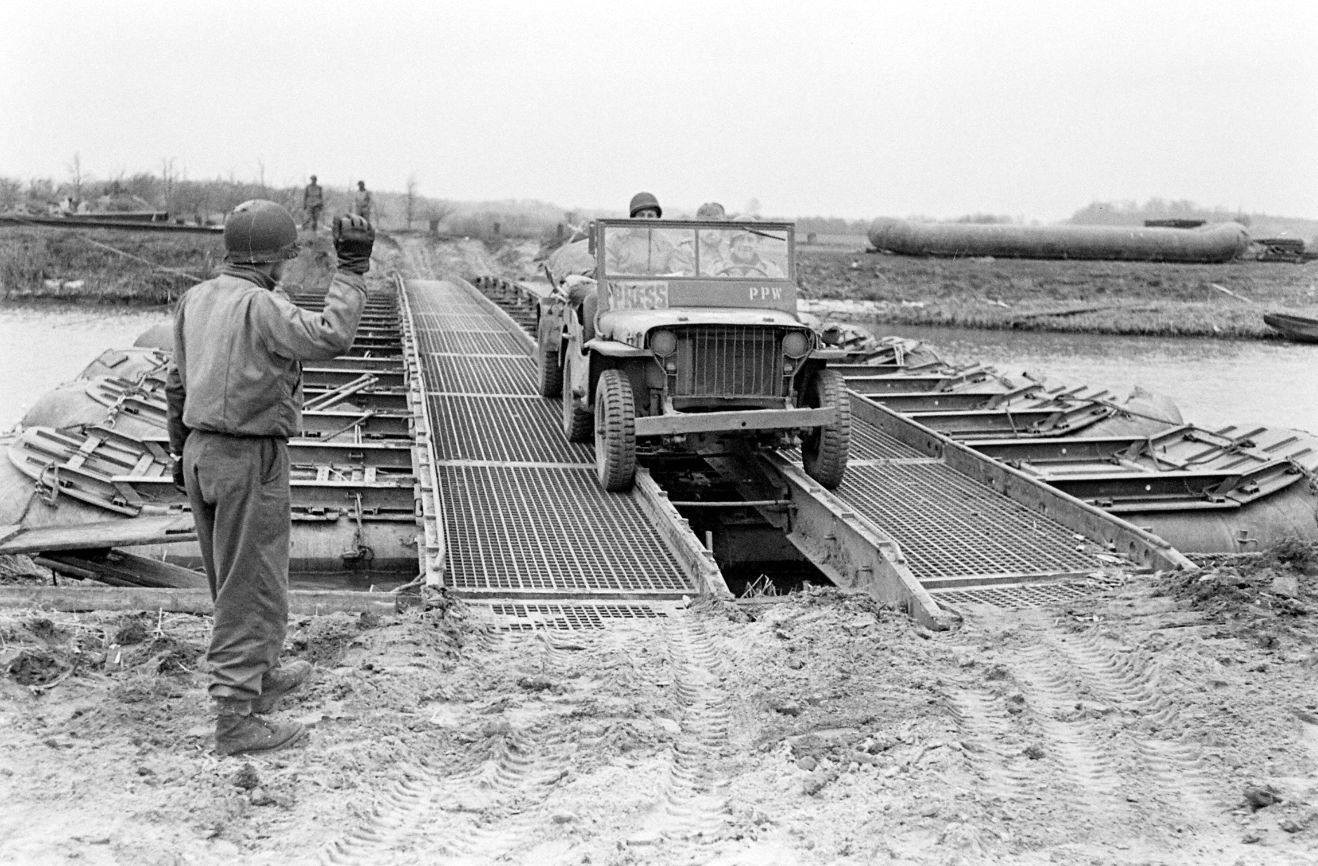 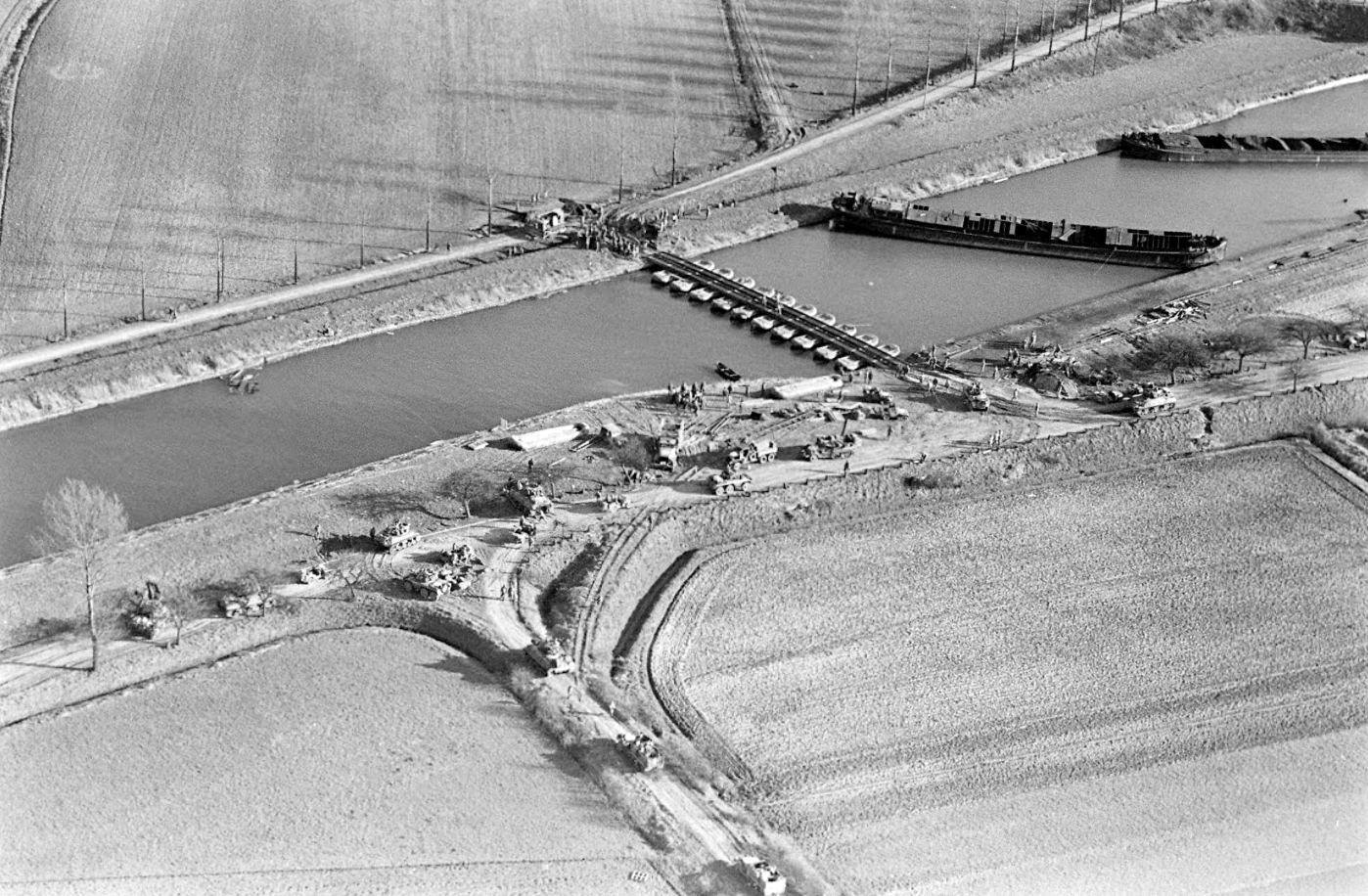 In the plains, that the division followed en the march to the vicinity of Bielefeld and the Teuteburgerwald, the retreating Germans left numerous road blocks. Practically all of these consisted of dug-in logs, placed upright on the shoulders of roads (at entrances to towns) in a horseshoe shape, with other logs laying horizontally across the road, fitting in the mouths of the horseshoes, the open space inthese being filled with rocks and rubble. The disorganized enemy did not place the horizontal logs in most of these blocks, but both “A” and ‘D” companies were given  the mission of removing several that were fully placed. Co. “A”s solution to this was to use explosive to shear the horizontal logs, and if necessary winch or bulldozer the upright logs from the ground.

Bound Brook—Sgt. Patsy Stra, son of Mr. and Mrs. Santo Stra of 28 N. Main St., Flemington, and brother of Carmen Stra of 564
i Marion St., this borough. has re-, ceived an honorable discharge from the L. S. Army after four years of service. The youth served for 33 months in -active combat duty with the Engineers’ Corps of the 17th Armor-
ed Engineer Battalion of the Sec-ond Armored Division. He took part in the African and Sicilian campaigns, the D-Day invasion of Normandy and operations in Bel-gium. Holland and Germany. Sgt. Stra has been decorated with seven battle stars, the Silver Star for gallantry in action, the Good Conduct ribbon and the pre-Pearl Harbor ribbon. The unit with which the youth served was labeled “Hell on Wheels.” He was awarded the Silver Star on May 13, for action on Apr. 10 of this year when he was given a mis-sion of clearing a roadblock near the town of Lengede, Germany. According to the citation. “The roadblock, under small arms and extremely heavy artillery fire, had temporarily halted the advancing columns in their attack against .German held positions. Terrain characteristics were such that by-passing the block would delay the advance many hours. therefore Sgt. Stra organized and led a demolition icrew to the obstacle to place TNT charges. Stra’s outfit successfully bridged the Rhine and his division was able to cross that river, launch its of-fensive through the 17th Airborne Division, across the Dortmund-Ems Canal to reach and cross the Elbe. Stra entered the service at Fort Dix on July 17, 1941. and received his training at Fort Belvoir, VEL, and Fort Benning, Ga. He went to Africa from Newport, Va., on Oct. 15, 1942.

The mountainous area was reached 3 April, the drive to them being remarkable in the streams of foreign workers and prisoners of all description and in a variety of uniforms seldom encountered were walking, riding bicycles, carrying packs or pulling small wagon loads of personal articles in a never ending caravan during the daylight hours. Occasionally even a German soldier in uniform could be seen in one of these groups, looking for some place to surrender. Twenty-seven prisoners were taken by Co. “B” during the first two days of the month, and an unrecorded number rounded up by the other companies. 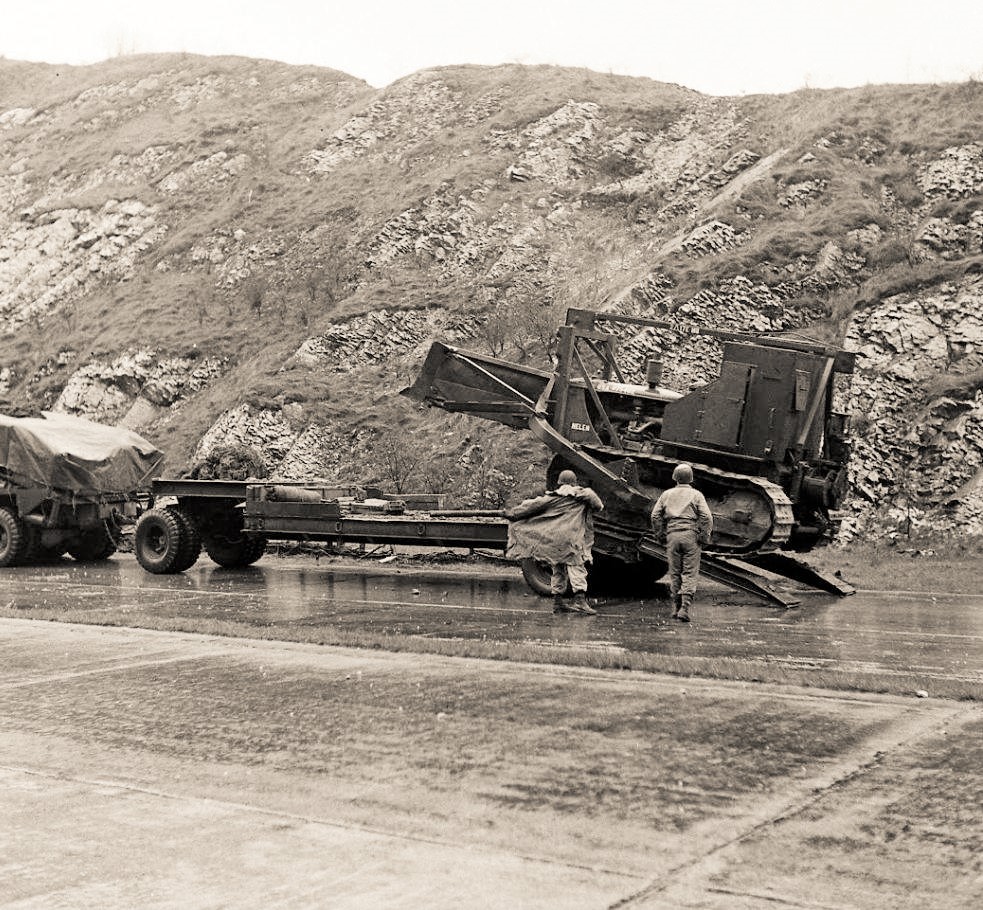 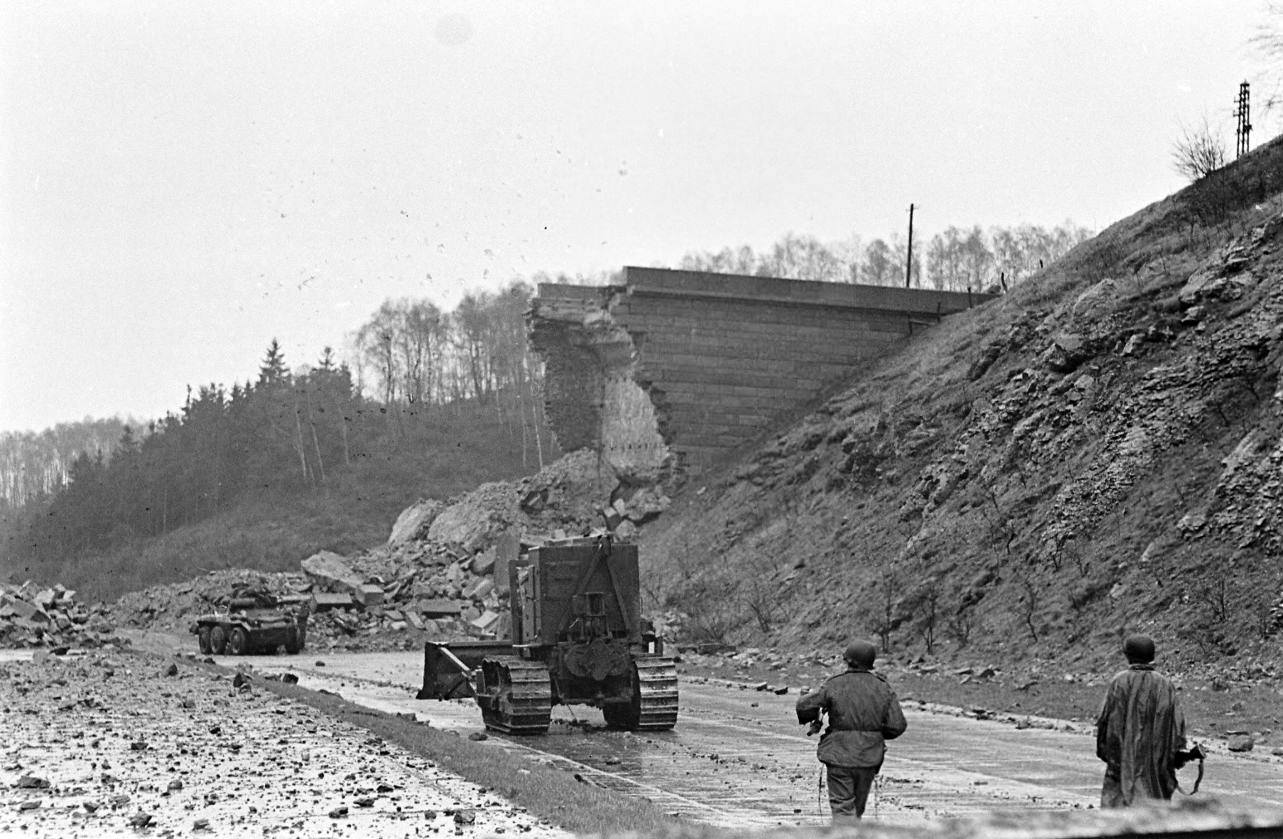 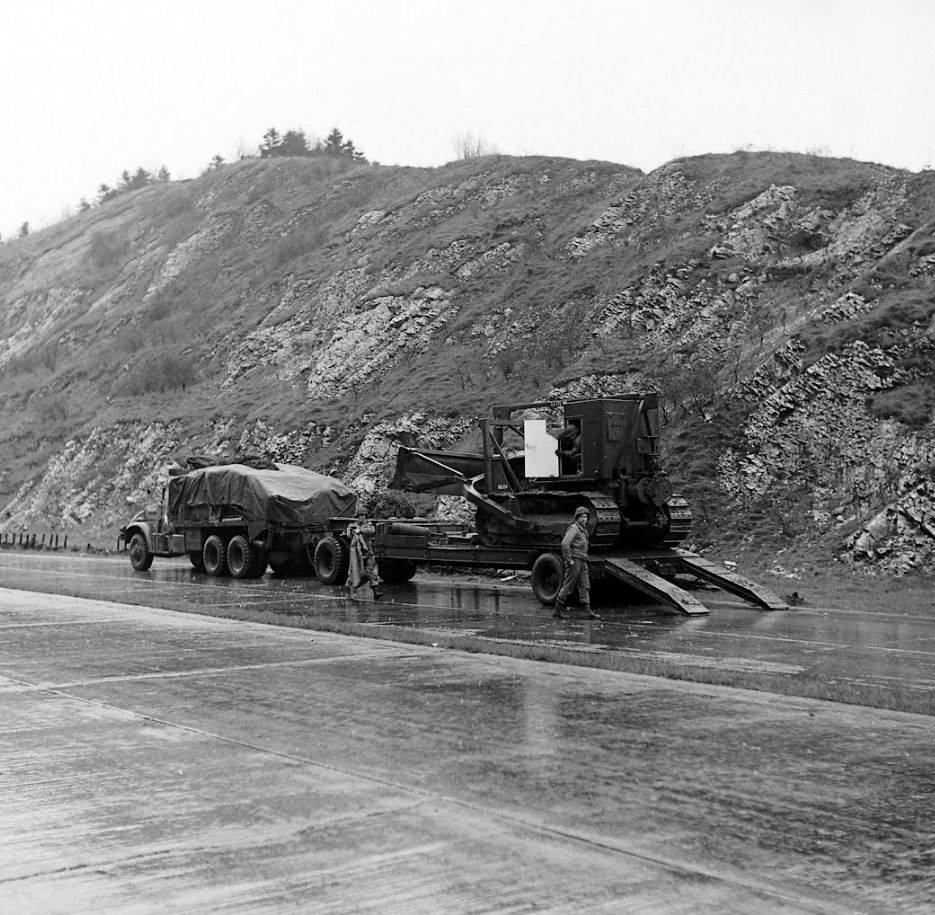 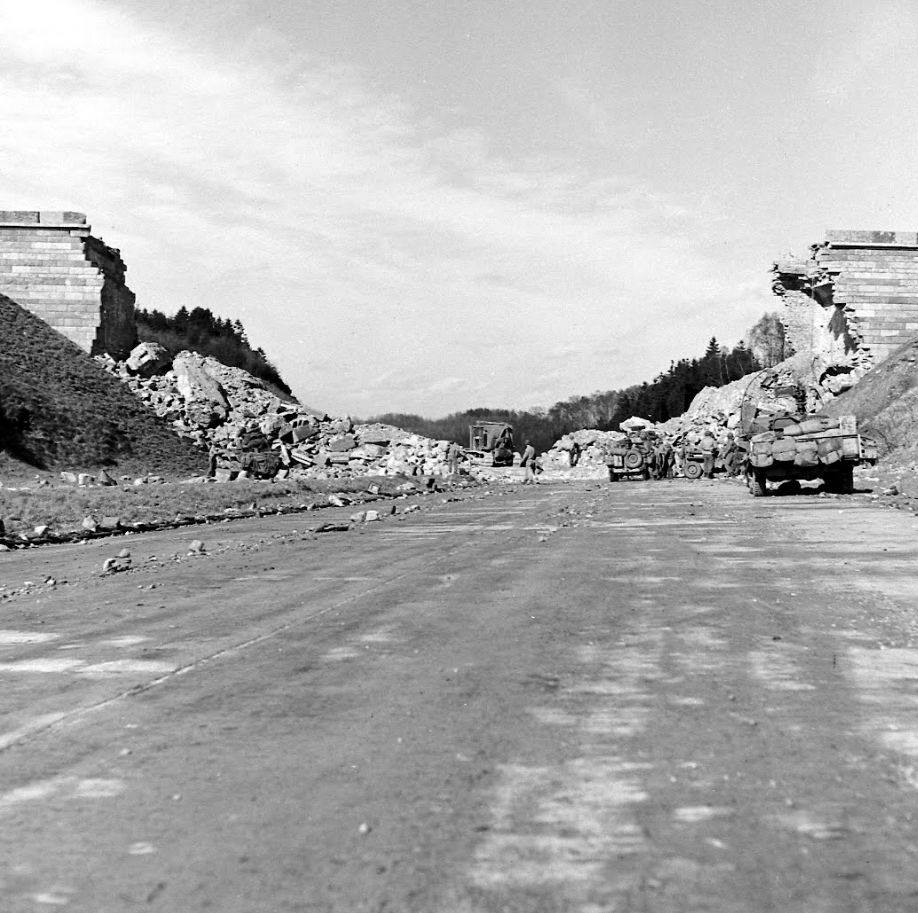 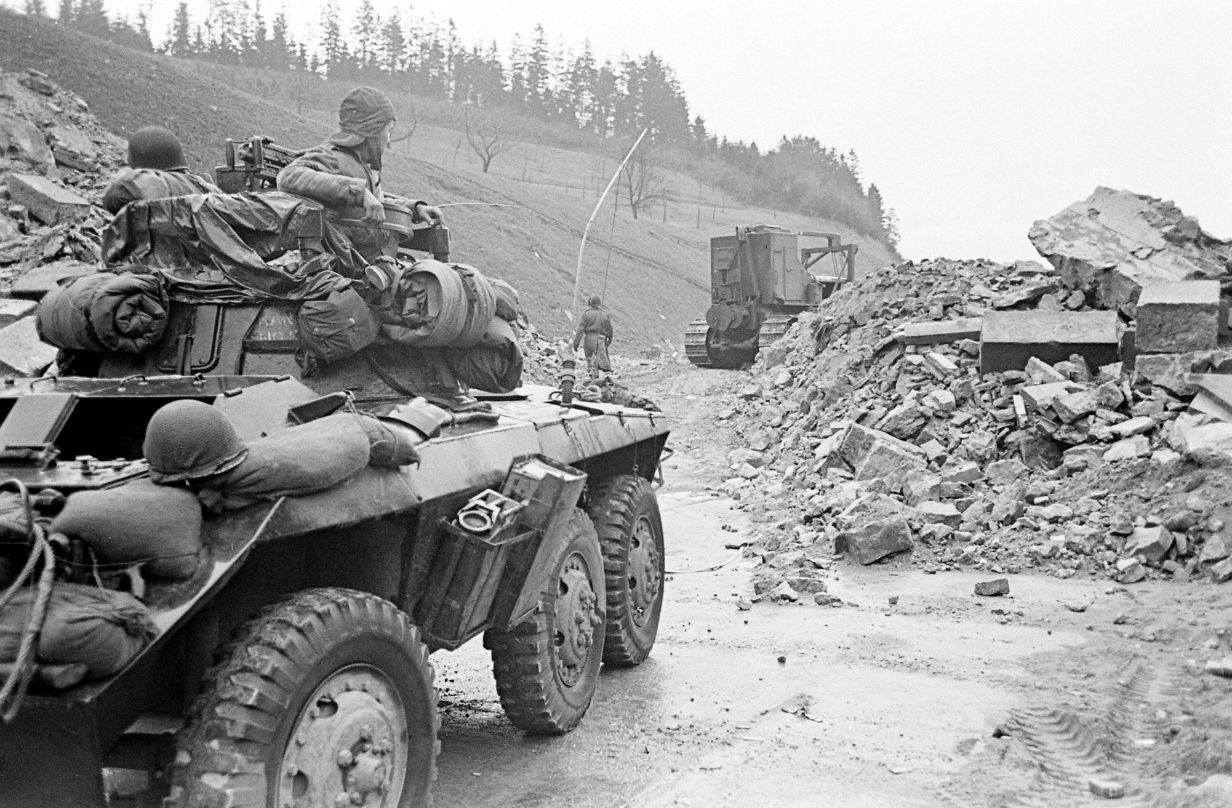 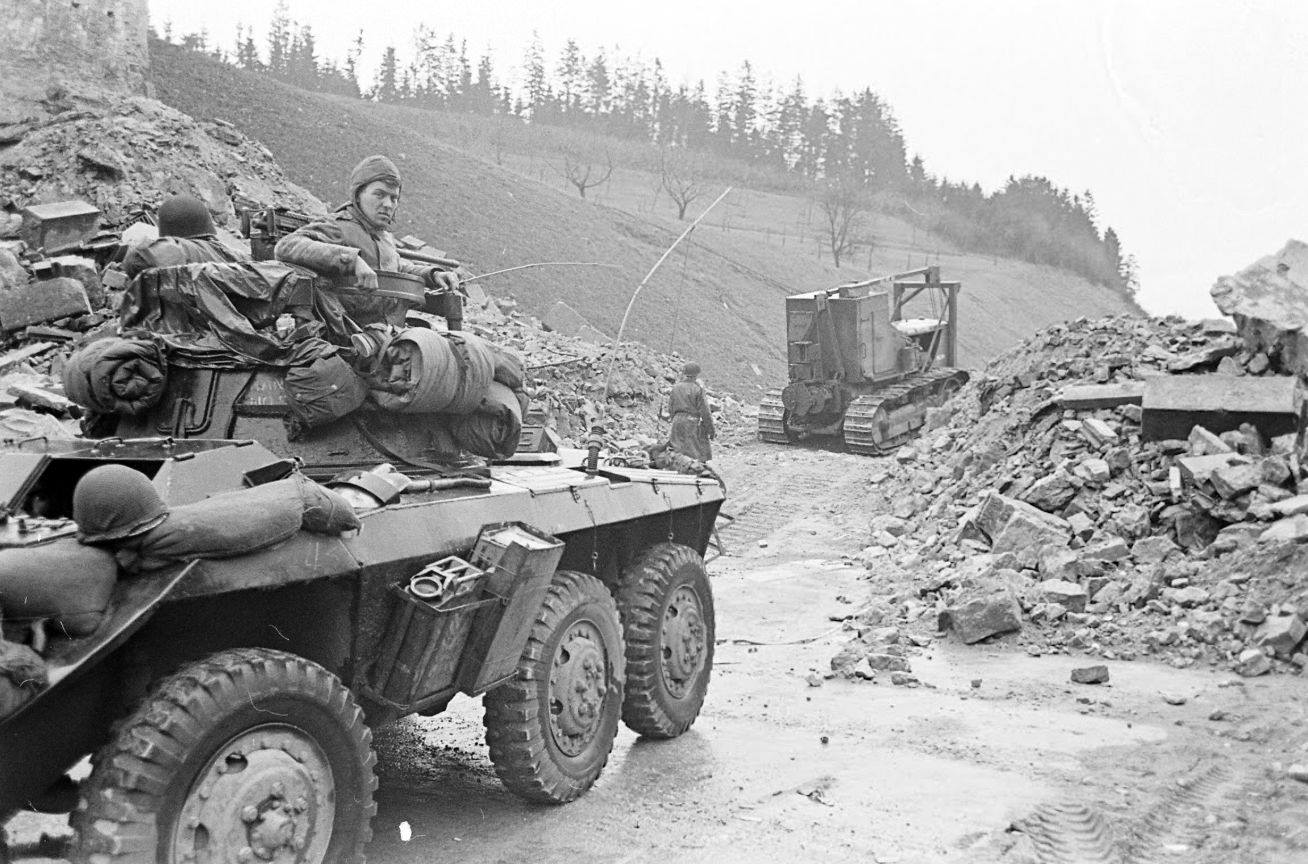 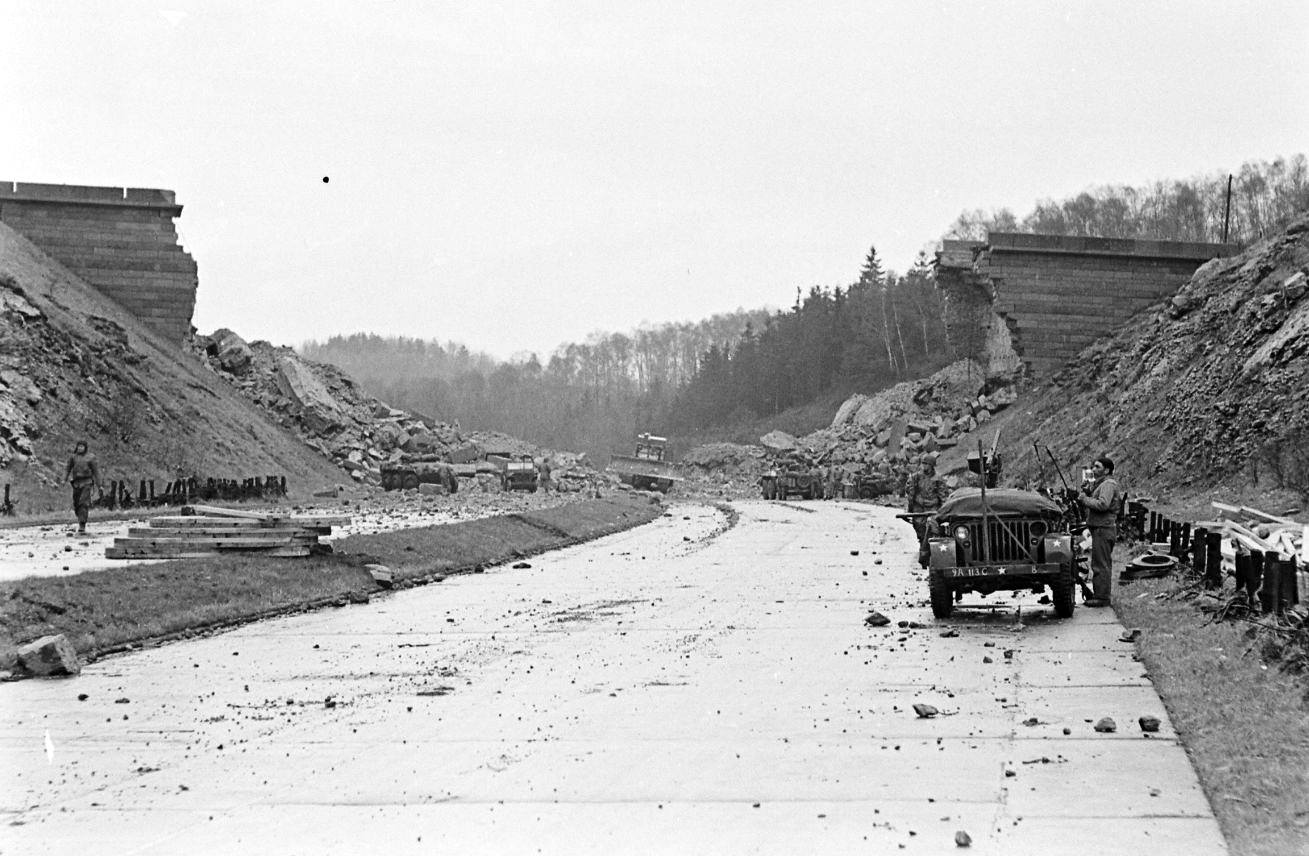 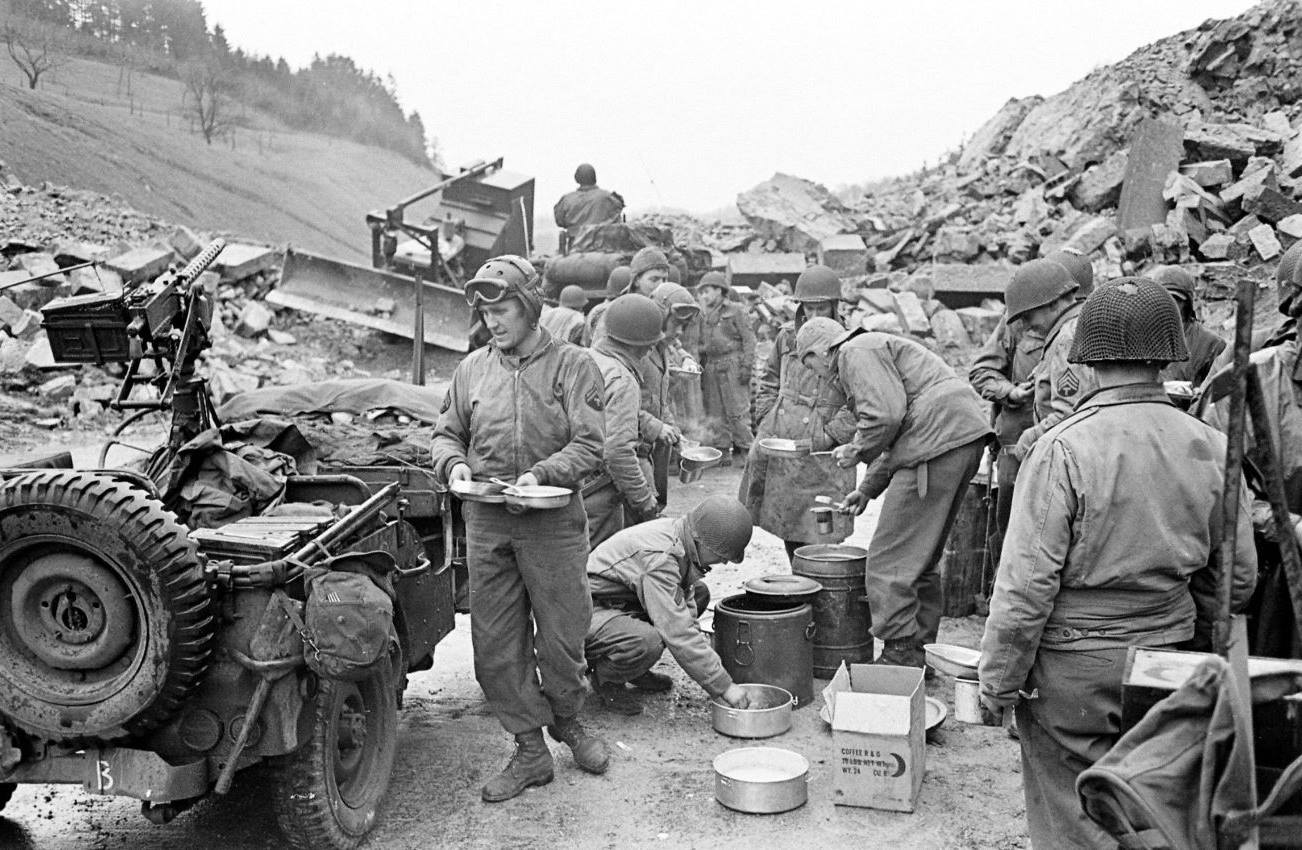 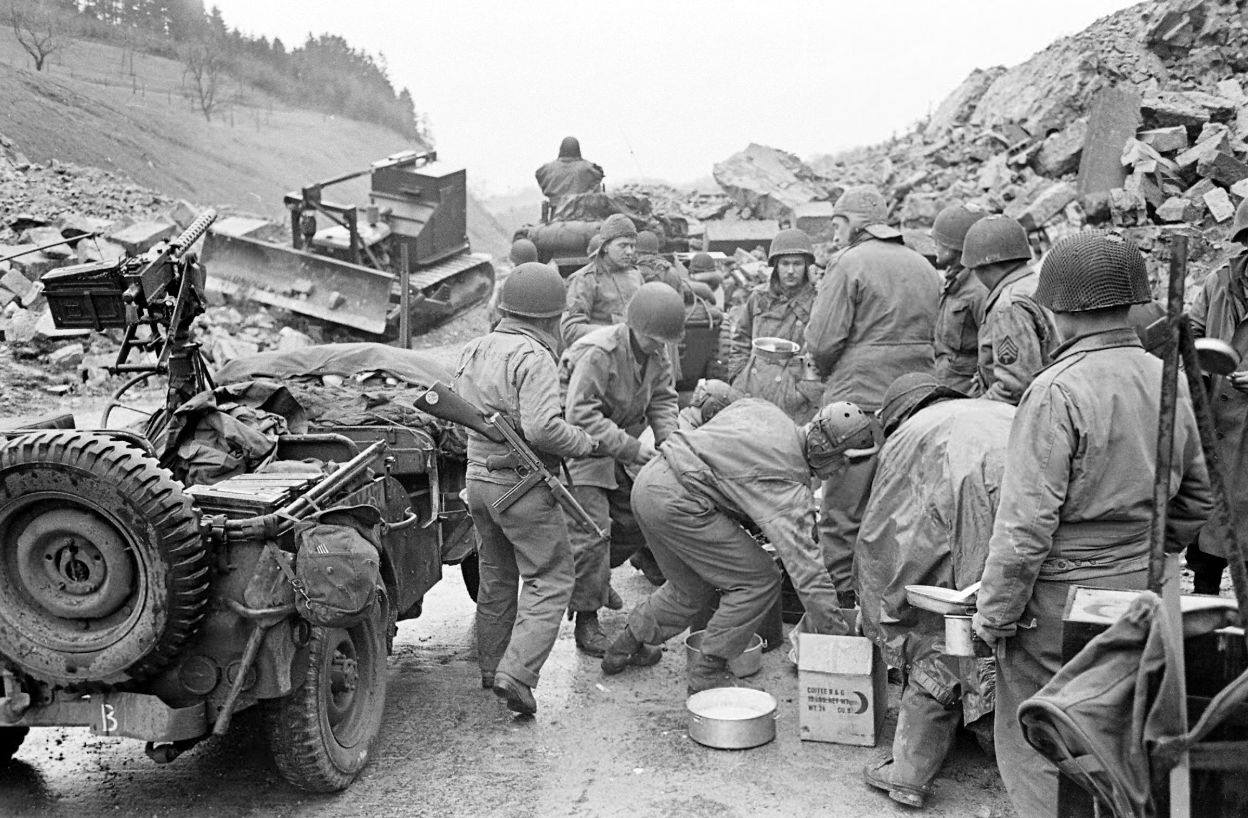 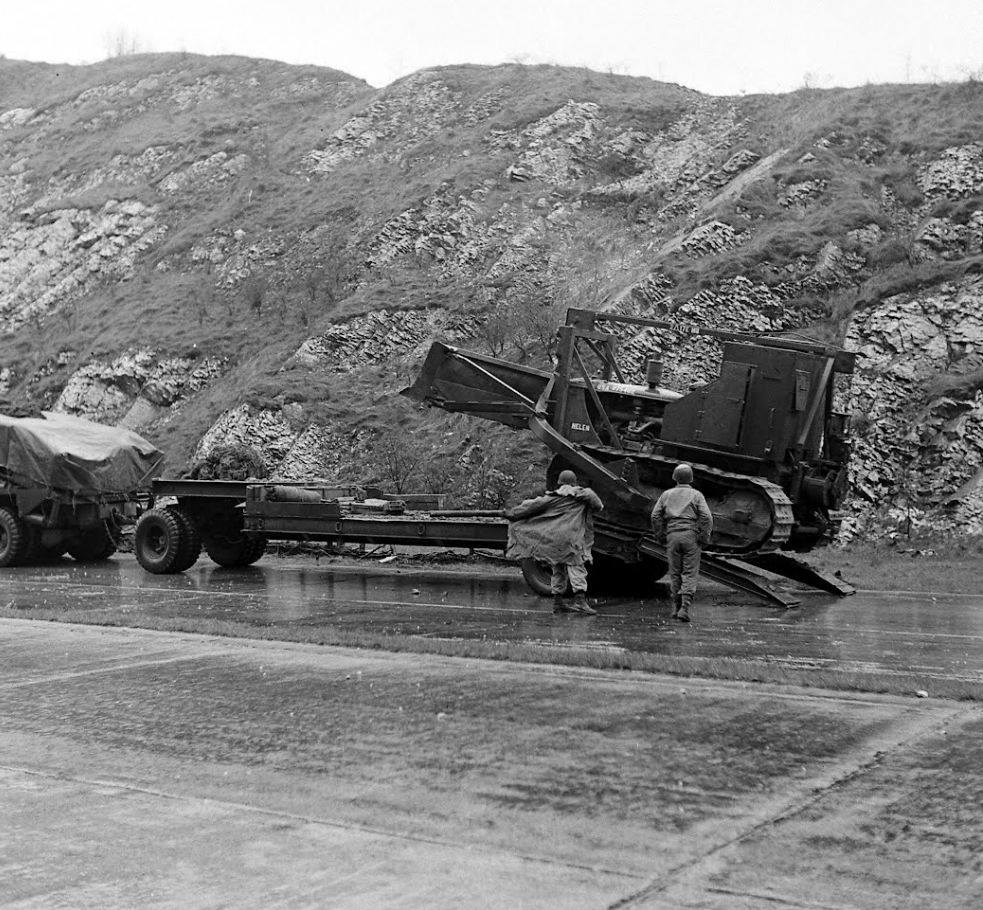 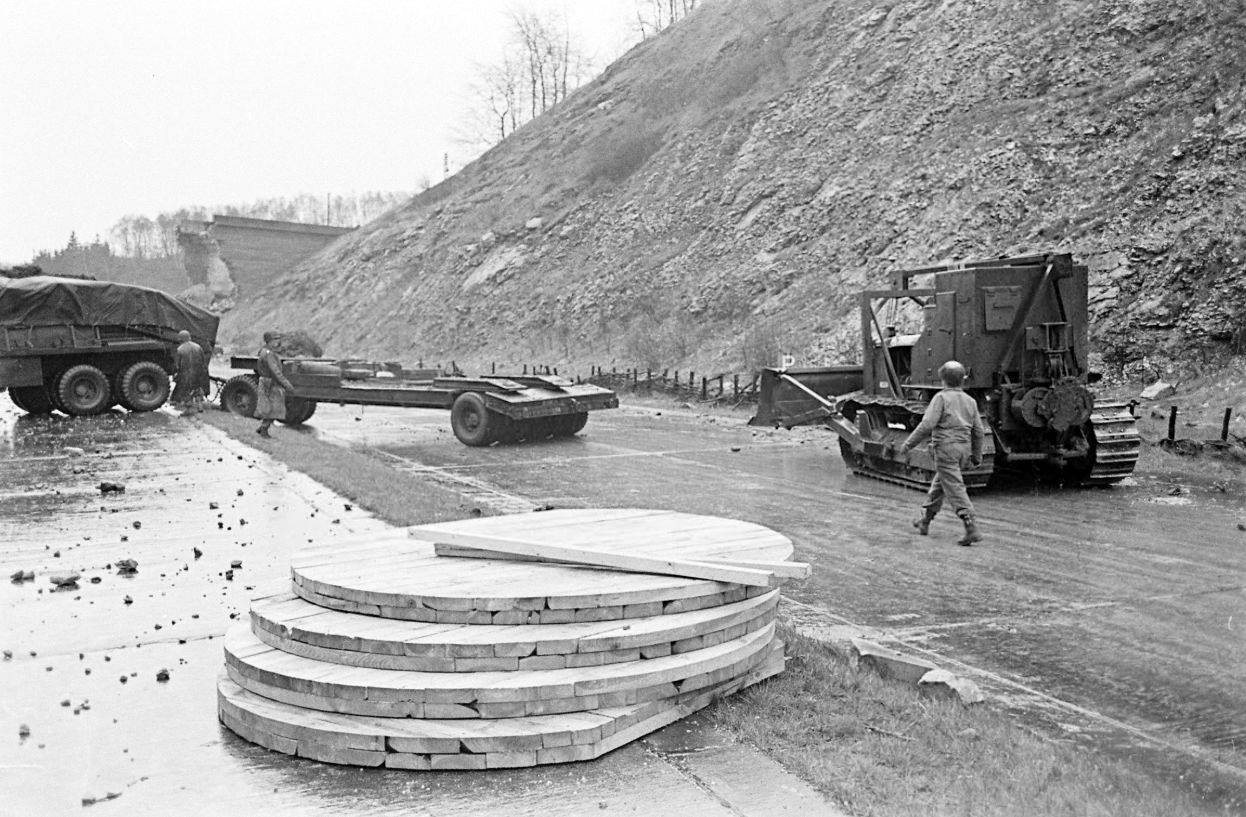 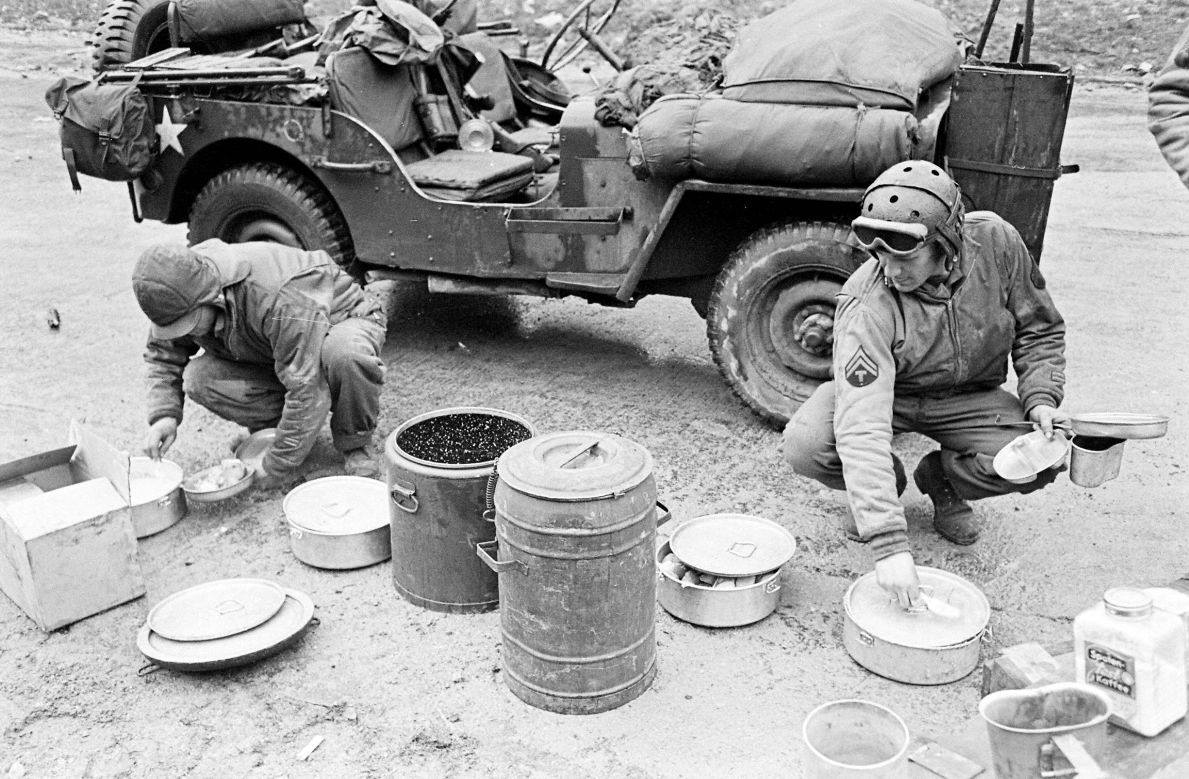 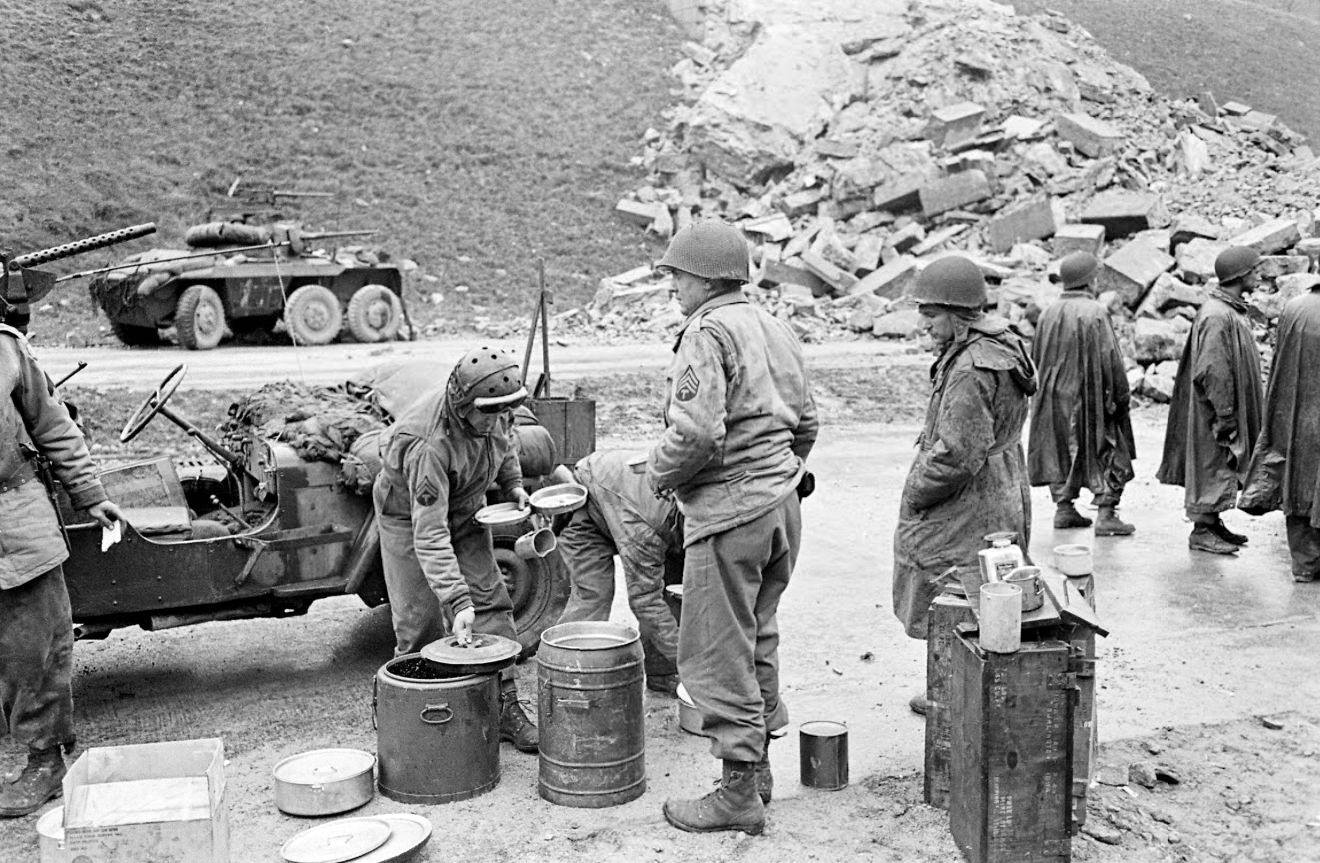 Several demolished bridges on the selected routes of advance through these mountains and resistance of various enemy troops caused a slight halt. Near Arzen en 4 April Co. “A” removed several road blocks, and at Lemgo the 1st Platoon of Co. “B” destroyed two 88 mm guns end 50 enemy bazookas, while the recon section removed demolitions from a bridge, including 10 “S” Mines. Co. “B” also took 30 PWs that day and provided a guard on e captured hospital. Platoons from C and “D“ companies were on outpost duty, usually  with tanks. On 5 April Companies “A” end “B“ bridged  the Weser River, the job requiring 384 feet of tread way and  being completed in four hours. Two platoons of Co, “B” remained to maintenance the bridge, which was used by CC “A” to cross the river. 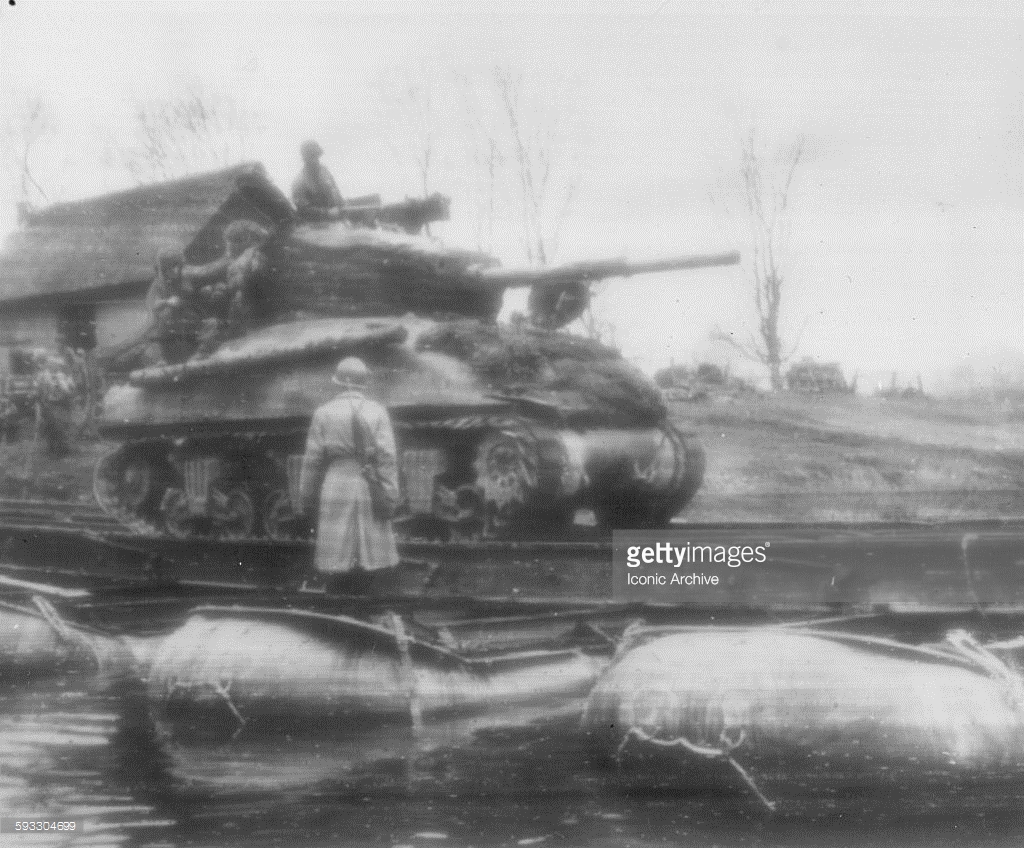 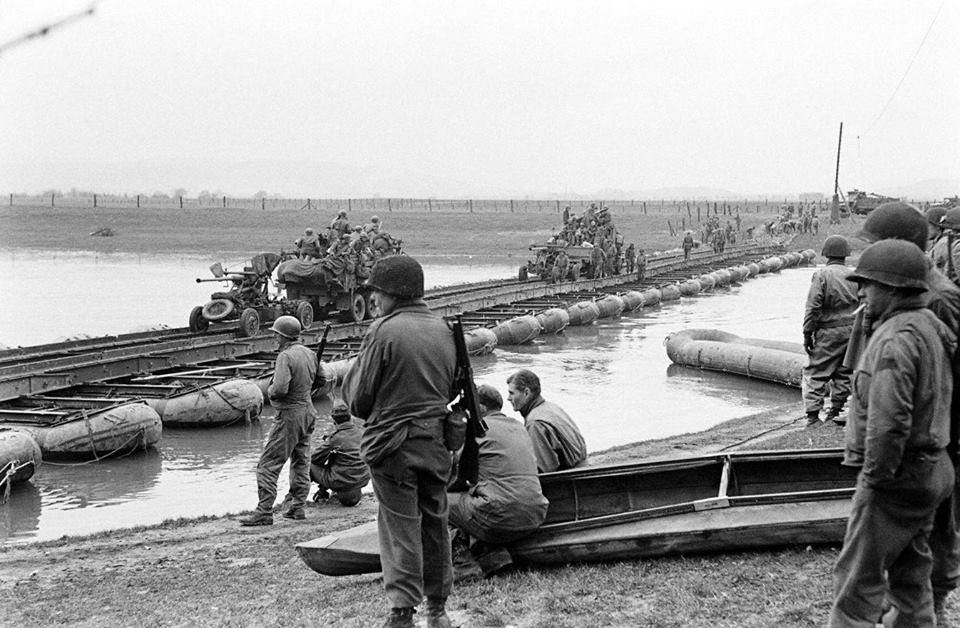 The Weser river, members of 17th Armored Engineers watch elements from the Division cross the Bridge they constructed 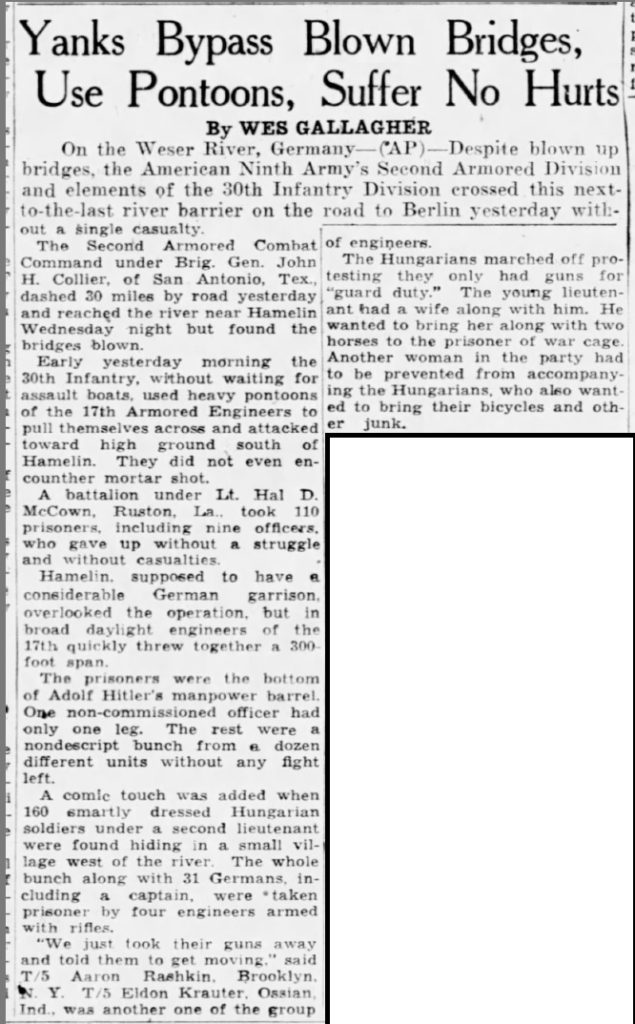 Companies crossed the Weser in combat colomns 6 April and proceeded on the march generally towards Hildesheim. Enemy planes were active on several occasions, Co. “A” reporting strafing at Shulenberg and Co. “C” at Elze and Escherde. Co “A” was given instructions to build a bridge over the Zwikanal (Zweigkanal) at Hildeshiem 8 April at 1730 and worked,  again with Co, “B” until 1000 the next day when a change in plans called off the operation Co. “B” removed the 114 foot bridge on 10 April. During this part of the drive the division was pushing so fast that the Infantry which was to take over the captured territory could not keep up. Our own Infantry was being used to guard stores of material, military hospitals and other Installations, and this job finally passed to the Engineers. Co. “C” on leaving Binder 10 April left two full Platoons and the Engr section guarding a variety of warehouses, loaded box cars, a hospital, at seven different locations, and two days later, with the 1st Platoon on road block duty at Maderndoheliben, near Magdeburg, even the mess section was called on to guard a captured hospital in that town. The first casualties of the campaign, were suffered by Co. ‘A” when two men were killed 10 April from enemy artillery air bursts at Litchenberg. 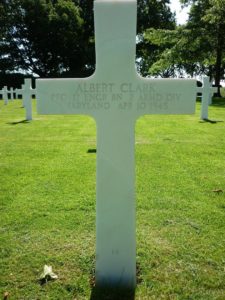 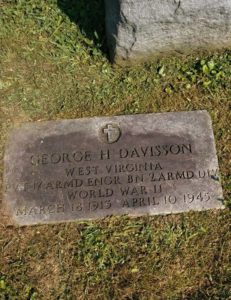 (Edit 2: On the 10th of April Lieutenant Francis Turner was awarded the Silver star for an operation of Company A (from first platoon), with two men killed (and two wounded)
For more information: Veteran Mr Francis C. Turner.)

(Edit 3: ( Source: After action Report Company A, in Combat Command A.)
Report for Operations for Company A, 17th Armored Engineer Battalion for period from april 1945 to 30 april 1945, inclusive.
10 April 1945: Company less two platoons moved out in Combat Command A column and closed in an area in LICHTENBERG (C748957) at 170: 00 hours.
Waterpoint was installaed at (c703950). The enemy concentrated artillery air bursts in this area and two enlisted men form first platoon were killed.)