For the WWII Re-enactment Group of the MARS Association, we designed a military structure for our re-enacmentgroup based on the original TO&E structure as it was for the 17th Armored Engineer Battalion. You can read more about that on this page.
This means that this military structure is controlled by officers and non-commissioned officers and followed by the men. We also maintain this rank structure during the events as we portray the 17th Armored Engineer Battalion. 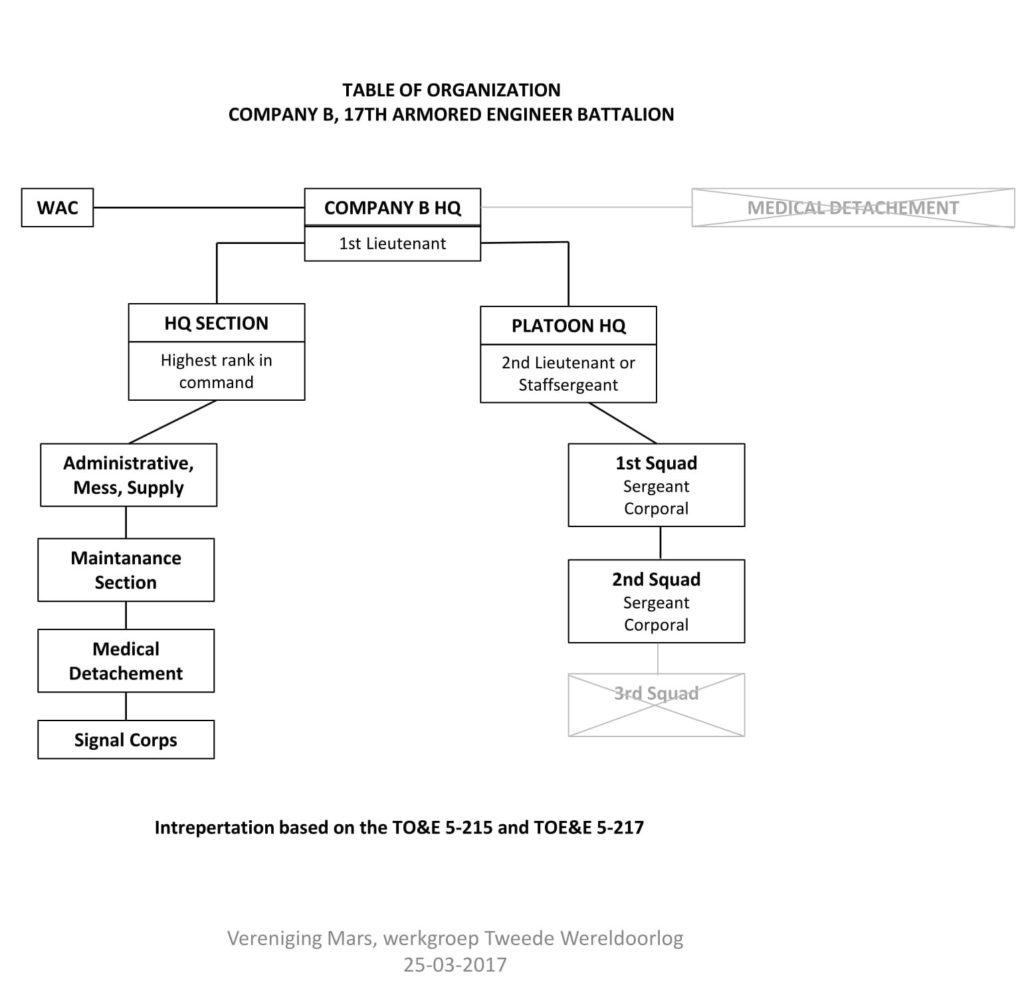 The above structure starts with a “Company” there were 3 Companies indicated by a letter, our group is under B.
The Company Headquarters is the Headquarters on the Company level. Normally this covers many more functions, but we simply don’t have enough members for that. Nevertheless, this has been chosen so that a command structure is created within the hobby under the leadership of different ranks. The Company is managed by the First Lieutenant.

This HQ section operates under Company B, as seen on the left side of the structure, the “HQ section”; Section / Group Headquarters, with the highest rank present at the event being formally in charge. The units that provide support to the Company are assinged under this Headquarters Section. That is very broad, such as Administration, Food, Supply and Logistics. In addition, the Maintenance Group and a separate detachment with a medical service, which is called the Medical Detachment.
Finally, there is a Liaison Service with the radio service, telephone service, pigeon post, telegraphy etc.

Platoon Headquarters or “Platoon Headquarters” is headed by the Second Lieutenant or “Second Lieutenant” with the support of the Staff Sergeant (comparable to a Sergeant 1st class). Two “Squads” then fall under this headquarters, each led by a Sergeant and a Corporal.
A squad normally consists of 12 men, including a Sergeant and the Corporal. These two squads do the regular Engineers work with a number of functions.
These two squads are also regularly deployed as regular infantry.

At the start of the day during the Roll Call, the members are divided into groups and leadership structure is established.