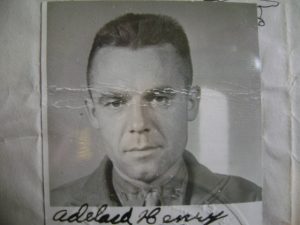 He was originally born on 25 Oct 1910 Bic, Bas-Saint-Laurent Region, Quebec, Canada. He and his familiy immagrated to the United States in 1927 and lived in Salem City, in Massachusetts.
He spoke both fluent Canadian dialect French and English.

Charles E must have met Marie G in Canada before he went to the States in 1923 and started a restaurant. His brother went to years later and worked as a Cook (at his brothers Restaurant?). Jeanette was born in 1930. 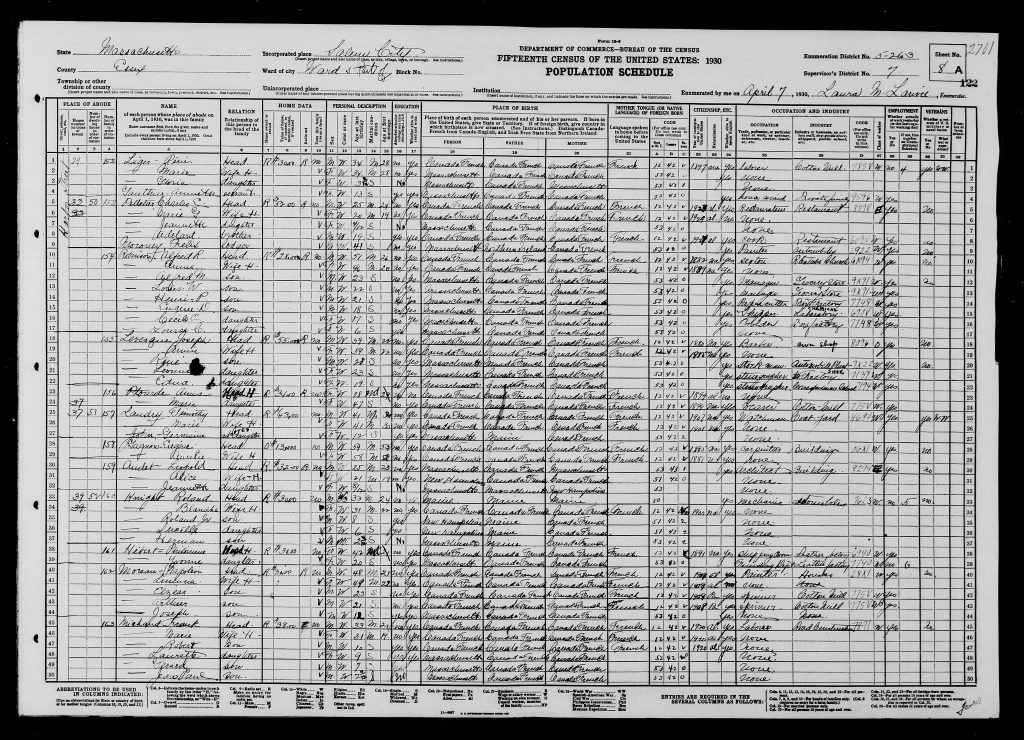 Adelard Pelletier lived in this property in 1920 with the family of his brother and a lodger.

Information by the US Sensus 1940 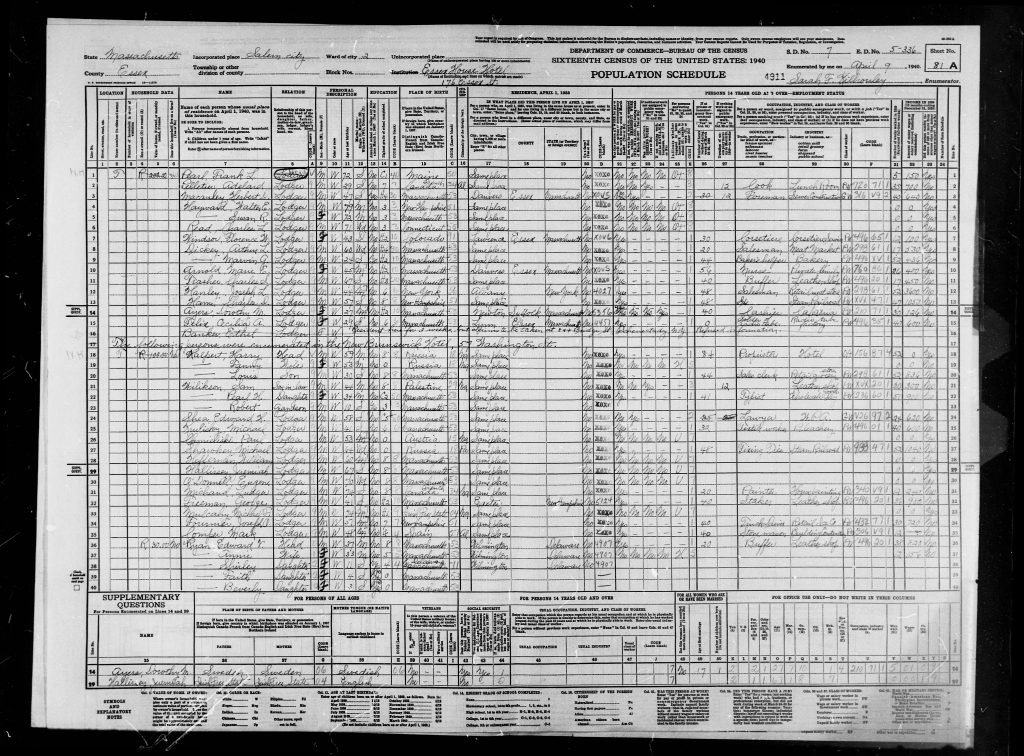 Adelard Pelletier stayed in the “Essex House Hotel” in Ward 2, Essex County, Salem City, Massachusets. At that time it was on the corner of the Essex street and Liberty Street. The new shoppingmall across the building changed the surroundings. The building still excists but it is not an Hotel anymore.

During his stay in the Hotel he worked as a Cook in a Lunchroom, at the time the sensus was noted he had a job before was currently without a job was searching. His income was at April 9, 1940 only 700 USD. He was Single and did not attend High School. 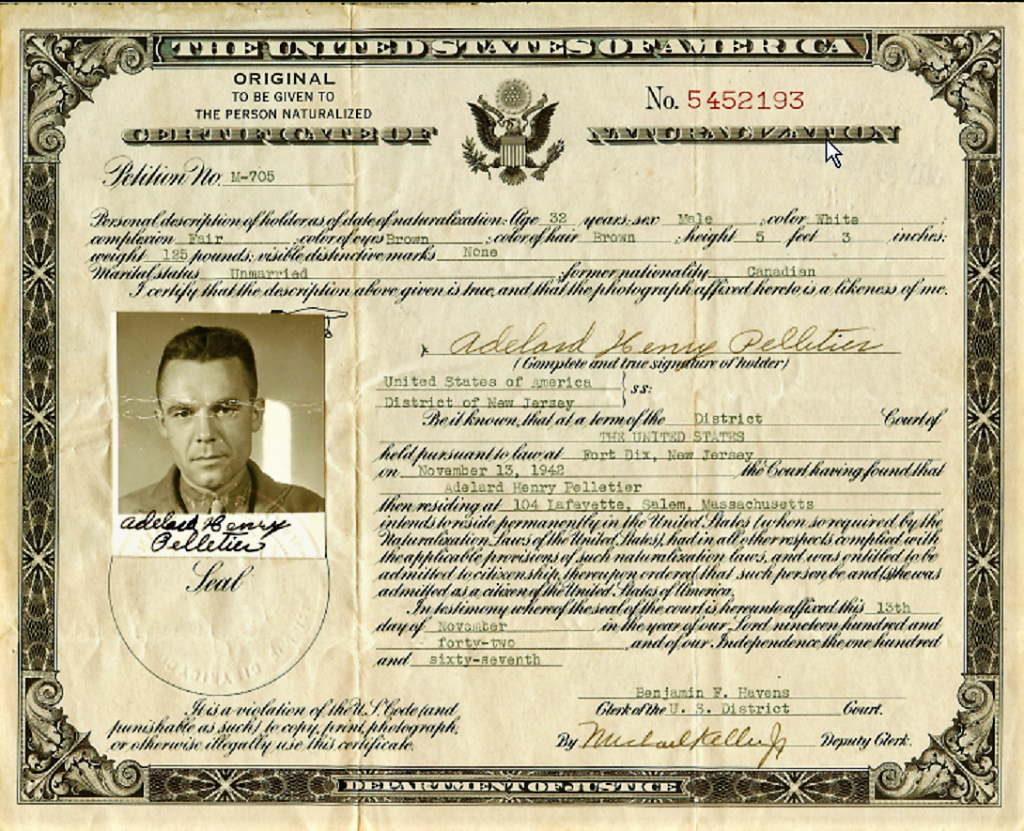 When Adelard Pelletier was in the Army and 32 years of age he was declared US citizenship on November 13th, 1942 at Fort Dix, New Jersey.
He was still unmarried at the time.

He lived at 104 Lafayette, Salem Massachuttes where owned or rented a appartment.

The docuement tells us the following information:

He was a technical Sergeant 4th Grade and served in the Company Headquarters, Company A, 17th Armored Engineer Battalion, 2nd Armored Division.
His Army Serial number was 31003195. He was unmarried and no childeren and had a civillian occupation as a Cook.
He enlisted on 3 January 1942 with active service, at fort Devens Massachusettes.
Adelard Pelletier had recieved his Marksman Rifle badge on February 1944 (probably during training in Holland after the Battle of the Bulge).
He served in the following Campaigns, Sicily, Normandy, Northern France,  Rhineland, Ardennes and Central Europe.
During his service he was not wounded at any time.

When he joined the service his homeadress was 248th Washingtonstreet, Salem Massachusettes. It was built in 1915 and has 3 stores, and 14 appartements.
Probably Adelard Pelletier rented a appartement in this building. 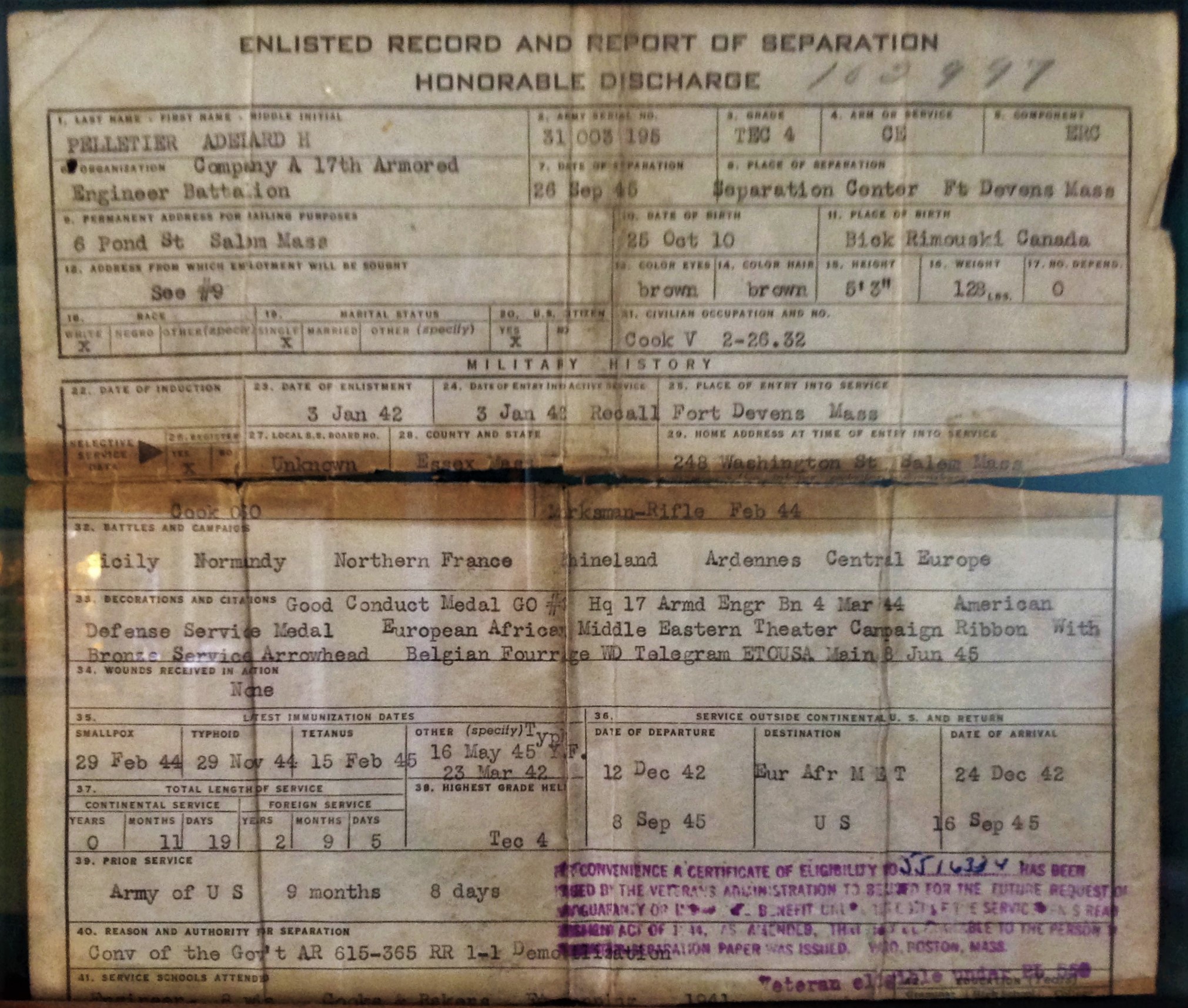 The discharge document states that he lived at the 6th pond street, Salem Massachusettes. Nowadays it is a multi-family home sits on a 4,043 square foot lot and features 4 bedrooms and 3 bathrooms. This property was built in 1915.
It could be that the family Pelletier lived here, but more likely it was an house with multiple appartements that could be rented. We know that Adelard lived in Hotels and appartments in Salem Massachusettes.

Adelard stayed in active service after WW II in the US Army and also served in the Korean Conflict. He made it to the Rank of Staffsergeant in 9th Infantry Division. 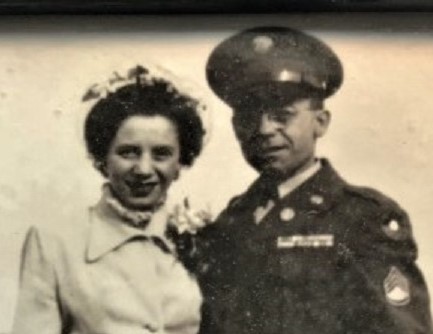 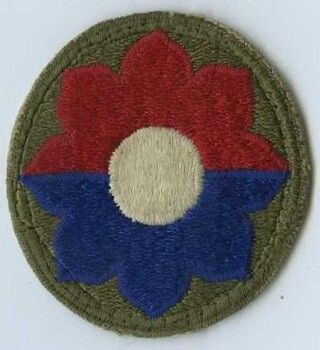 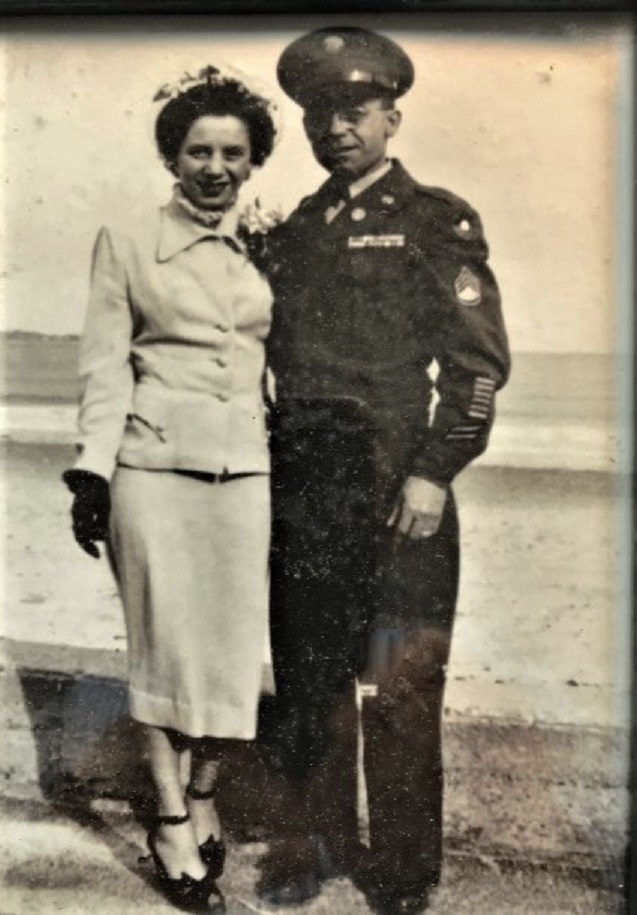 He  married the former Alexina Beaulieu and was the father of six children.
Adelard Pelletier had a daughter Mary (Pelletier) Cotraro and a son Bob Pelletier.
In his final years he struggeld with various health related issues and benefited from suppport at the Veterans Administration Hospitals in the greater Boston, Massachusetts area. 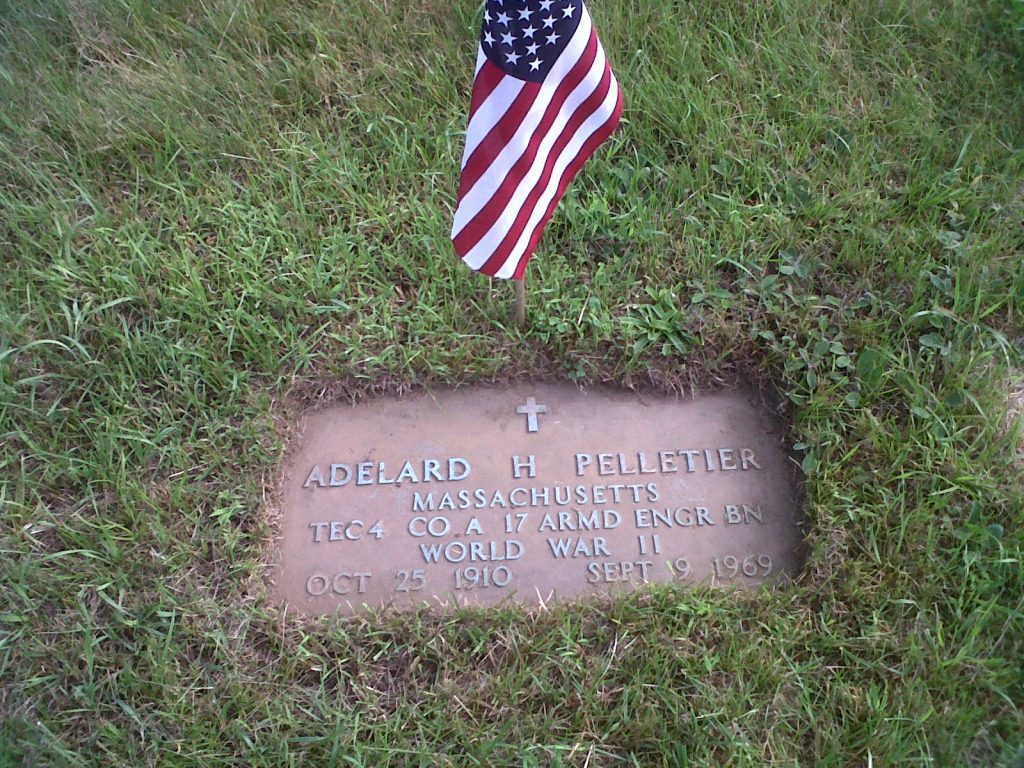 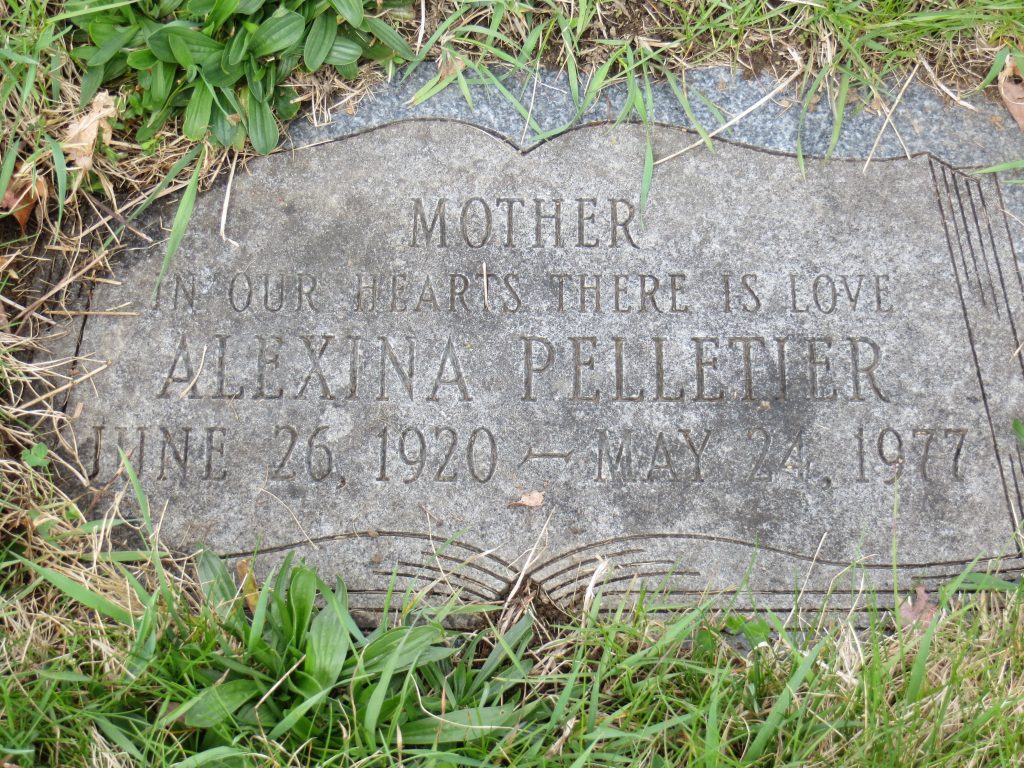