Phase III – Bridging of the Elbe

Combat Command “B” was given the mission of making a bridgehead across the Elbe River south of Magdeburg. The city had not been taken, was known to contain numerous AA guns, otherwise was believed to be lightly defended. The site of the bridging operation was decided en, after a reconnaissance by Captains Youngblood (“D” Co.) and McAdams (“E” Co.) at a ferry landing by the town of Wester Husen, five miles south of Magdeburg. The Plan was for Co. “D” to construct the bridge with Co. “E” equipment and the 82nd Engrs to furnish assault boats for the crossing of Infantry.

With the Bridge Co and Bn Hq at Gr Ottersleben, four miles  from the site, preparatory work was carried out there the night before the operation:  floats were blown up, saddles  attached, and were loaded on dump trucks, 15 having ben furnished by the 82nd Engrs, Lt. Col. Correll moved his CP into Wester Husen, all of “D”  Co  assembled there, and “E” Co moved its equipment into town. During the afternoon of 12 April enemy- artillery began a sporadic shelling of the site which lasted through the night. AA and indirect tank fire, obviously observed, continued harassing, and when the bridging operation began, was intensified.

Assembling of the Infantry (1/41) took more time than had been planned on, and it was 1000 when they began crossing. At 1045 Friday the 13th work began on the bridge. Two raft construction sites  were manned by the 1st  and 3rd  Platoons of Co. “D” plus one squad from the 2nd Platoon;  the other two squads, under Lt. Hillenbrand, were at the bridge assembly  site. Organization for the job was continually interfered with by the incoming artillery, but the job was gradually reaching out front shore. Work proceeded through the afternoon and night, until 0600 when a heavy barrage forced everyone to take cover. Three floats near shore were completely destroyed, and two hours later, when work  was resumed, floats near shore that were destroyed were deflated, removed, and others inserted. Other intense barrages called halts to the work later in the morning. Several of the workers were blown off a float by shell blast, but returned to the job. Probably the most distinguished act of heroism was that of Pfc Leo E. Rinkel of Co. “E” who by himself evacuated several wounded soldiers  from the far shore by two trips with the power boat under heavy fire. With the precariousness of the situation fully realized by higher headquarters, when the crews started back to the site at 1400 they were told that the job was called off. By this time 560 feet of tread way had been laid, extending to within a short distance of the far shore, but the finished portion held at least five punctured floats. 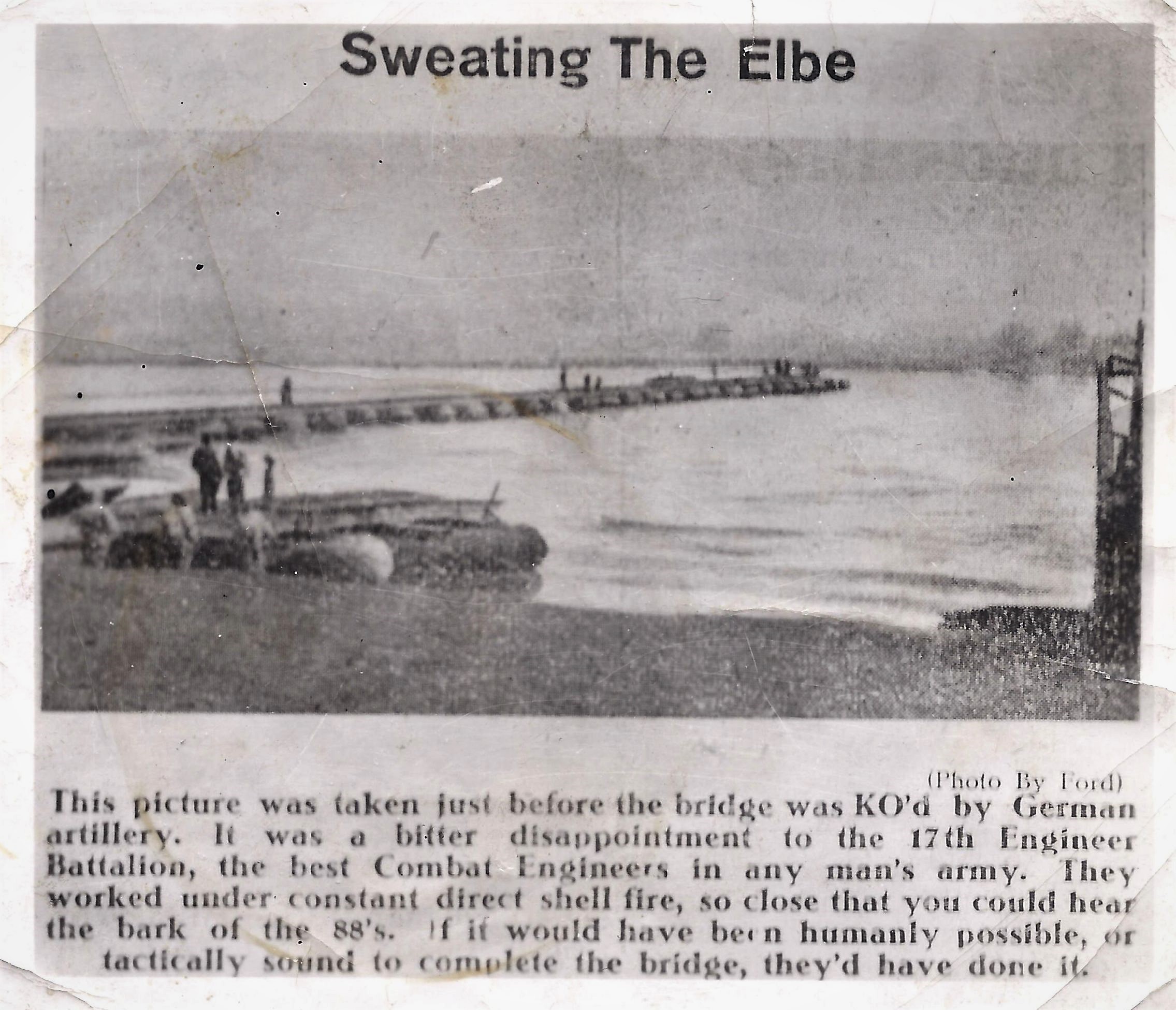 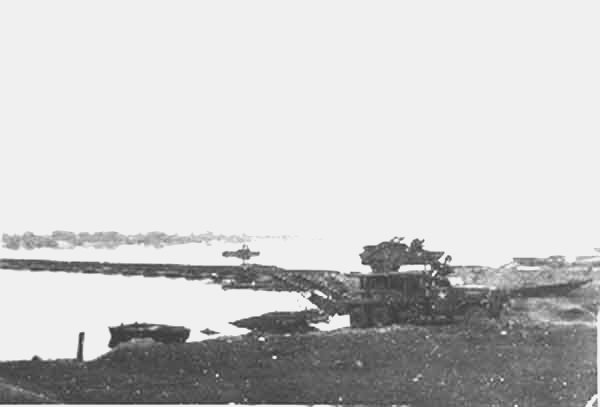 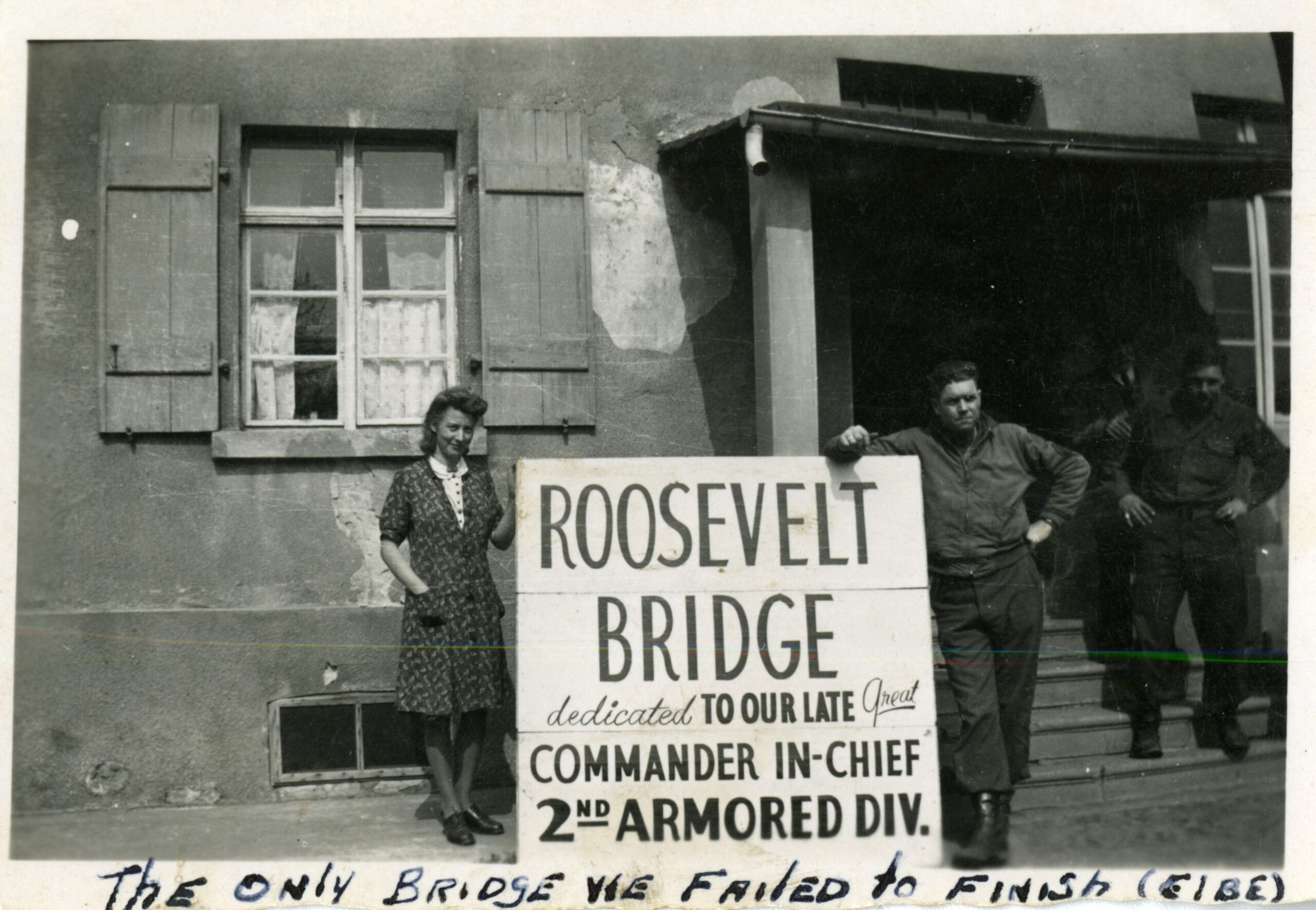 American serviceman and a German woman posing with a sign that reads
“Roosevelt Bridge dedicated to our late great Commander in-chief 2nd Armored Div.”
; another serviceman is standing on the steps of the building in the background.
Personal caption on front: “The only bridge we failed to finish (Elbe)
.” Westerhusen, Germany. April 1945. (Courtesy of Rob Joliff and ww2online.org)

“Early in the afternoon of 13 April the engineers had 25 feet more to go to reach far shore, with sufficient floors constructed on the near shore to complete the bridge. At this opportune time, another heavy concentration of artillery fire started to fall scoring a Direct hit on the furthermost (east) section of the bridge, three other floats further back were knocked out, and the floats along the bank, that were ready to move into position, were also punctured. One of the power bouts, used to pull pontoons into position, was also hit and sank immediately. Adding to this a direct hit was scored on an adjacent anti-aircraft gun position, killing the crew, and knocking out the gun. (source: Oldhickory30thcom) 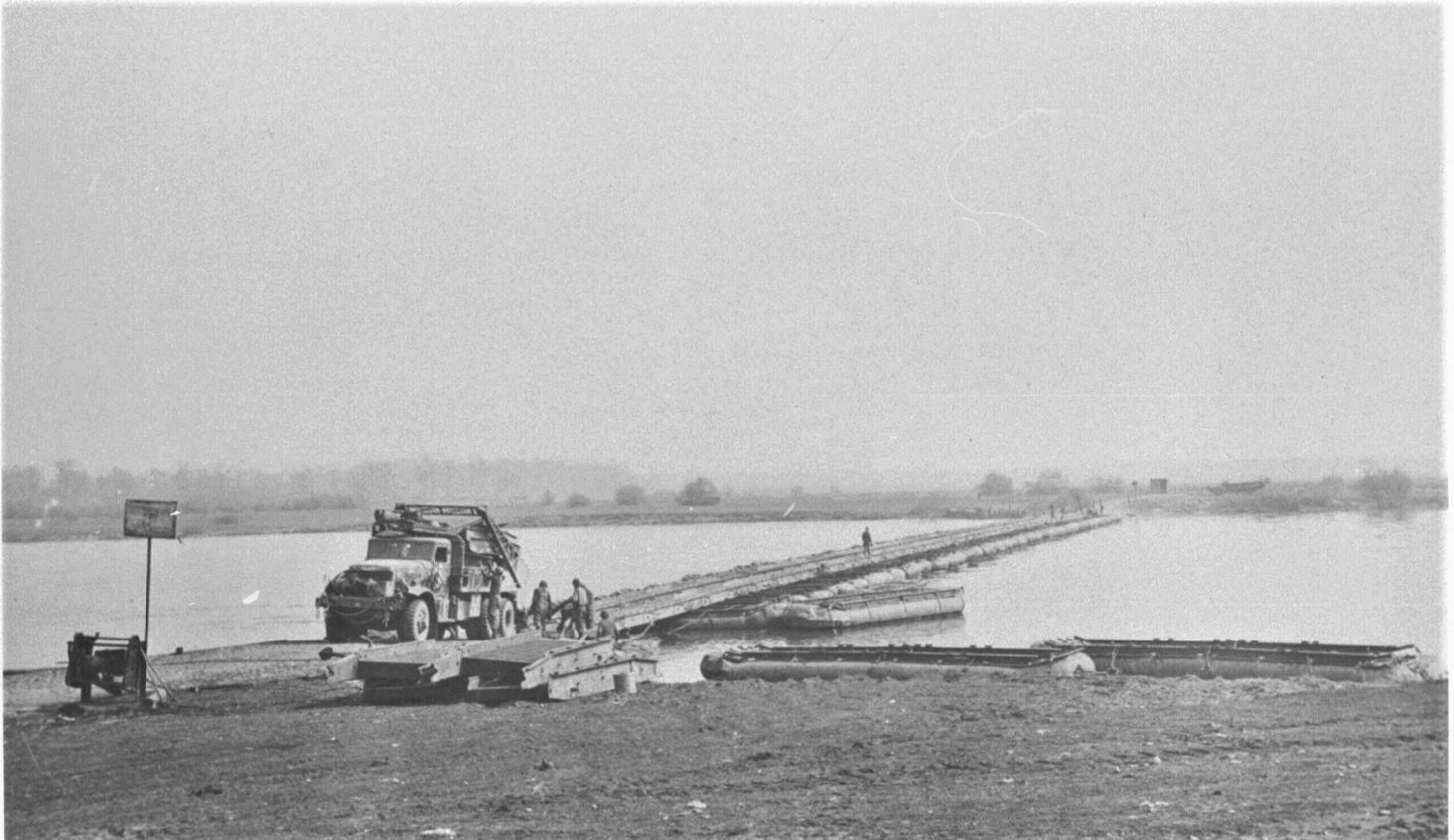 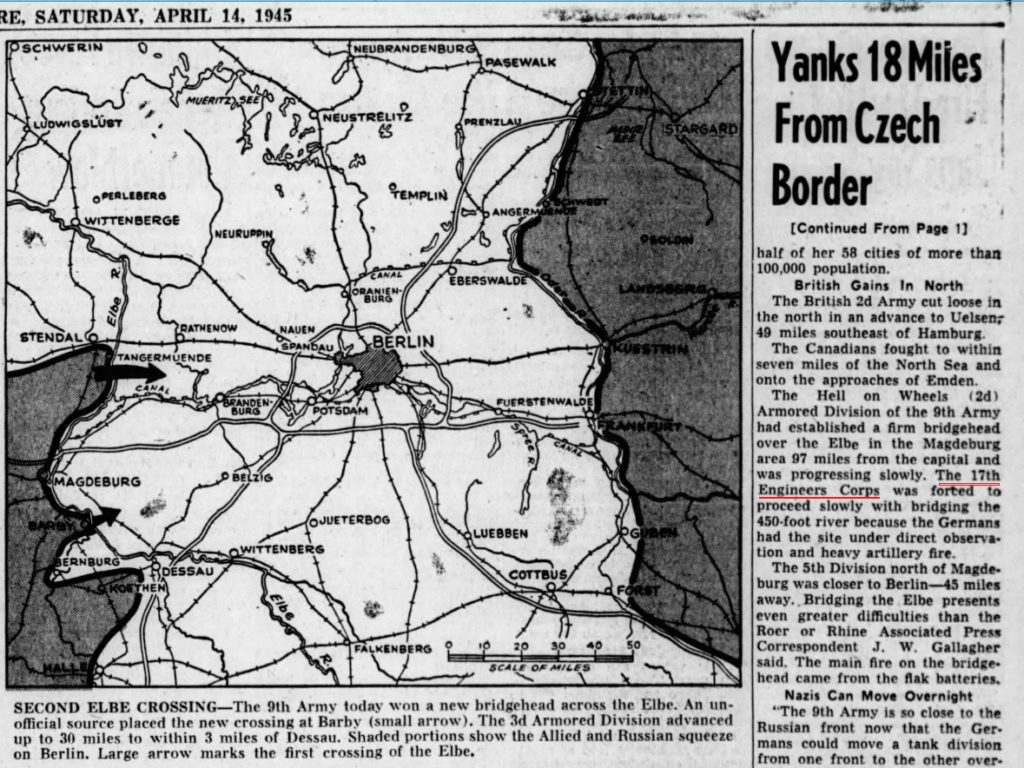 SECOND ELBE CROSSING—The 9th Army today won a new bridgehead across the Elbe. An un-official source placed the new crossing at Barby (small arrow). The 3d Armored Division advanced up to 30 miles to within 3 miles of Dessau. Shaded portions show the Allied and Russian squeeze on Berlin. Large arrow marks the first crossing of the Elbe.

[Continued From Page 1] half of her 58 cities of more than 100,000 population. British Gains In North The British 2d Army cut loose in the north in an advance to Uelsen; 49 miles southeast of Hamburg. The Canadians fought to within seven miles of the North Sea and onto the approaches of Emden. The Hell on Wheels 2nd Armored Division of the 9th Army had established a firm bridgehead over the Elbe in the Magdeburg area, 97 miles from the capital and was progressing slowly. The 17th Engineers Corps was forced to proceed slowly with bridging the 450-foot river because the Germans had the site under direct observa-tion and heavy artillery fire. The 5th Division north of Magdeburg was closer to Berlin-45 miles away. Bridging the Elbe presents even greater difficulties than the Roer or Rhine Associated Press Correspondent W. Gallagher said. The main fire on the bridge, head came from the flak batteries. 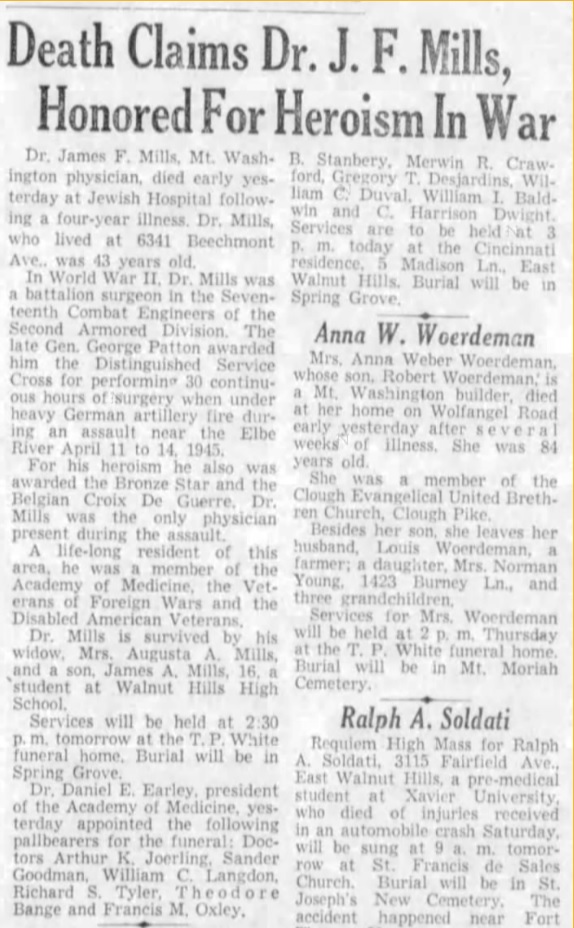 Death Claims Dr. J. F. Mills, Honored For Heroism In War
Dr. James F. Mills, Mt. Washington physician, died early yesterday at Jewish Hospital follow-ing a four year illness. Dr. Mills, who lived at 6341 Beechmont Ave, was 43 years old. In World War II. Dr. Mills was a battalion surgeon In the Seventeenth Combat Engineers of the Second Armored Division. The late Gen. George Patton awarded him the Distinguished Service Cross for performlne 30 continuous hours of surgery when under heavy German artillery fire during an assault near the Elbe River April 11 to 14, 1945. For his heroism he also was awarded the Bronze Star and the Belgian Croix De Guerre. Dr. Mills was the only physician present during the assault. A life-long resident of this area, he was a member of the Academy of Medicine, the Veterans of Foreign Wars and the Disabled American Veterans, Dr. Mills is survived by his widow, Mrs. Augusta A. Mills, and a son, James A. Mills, 16, a student at Walnut Hills High School. Services will be held at 2:30 p. m. tomorrow at the T. P. White funeral home, Burial will be in Spring Grove. Dr. Daniel E. Earley, president of the Academy of Medicine, yesterday appointed the following pallbearers for the funeral: Doctors Arthur K. Joerling, Sander Goodman, William C. Langdon, Richard S. Tyler, Theodore Binge and Francis M, Oxley,
R. Stanbery, Merwin R. Craw-ford, Gregory T. Desjardins, C Duval, William I. Bald-win and C. Harrison Dss lent. Services are to be held at 3 p. m. today at the Cincinnati residence, 5 Madison ln., East Walnut Hills. Burial will be in Spring Grove.

SURGEON Is Cited For Heroism

Three Other Greater Cincinnati Veterans Are Presented With Bronze Stars.

Bronze Star medals for “heroic action” have been awarded to two Cincinnatians, for service in Europe and the Pacific. Capt. James F. Mills, 6341 Beech, mont Ave., Mt. Washington, who was battalion surgeon of the 17th Combat Engineers of the Second Armored Division, a Ninth Army unit, was cited for his courage in reconnoitering for and establishing a forward aid station on the west bank of the Elbe River near the site of a proposed bridge. Th action took place April 11-14 before and during the assault across the Elbe south of Madgeburg and 12 miles from Berlin.  “He organized his detachment and planned his evacuation routes for the immediate handling of casualties,” the citation reads. “While primarily designed to care for engineer casualties, the lack of other similar facilities forced Captain Mills and his men to care for infantry, anti aircraft and other f casualties as well as their own men.

“Captain Mills, who was the only medical officer present, worked for 30 hours at a stretch, directing his men and performing as much surgery as the limited means al lowed. He coolly continued his work under Intense artillery fire, exposing himself where necessary to direct evacuation or to administer immediate aid. His leadership and professional , ability were an example to his men who never faltered. Besides his Bronze Star, Captain Mills is entitled, to wear the red-and-green cord looped over the shoulder which signifies the award of the Four de Guerre by the Belgium government to the Second Armored Division. The Second is the only foreign outfit to receive this award. Gen. George S. Patton, the Second’s original commanding officer, sent a personal letter of congratulation to his successor on the division’s successful crossing of the Rhine in 10 hours. The Captain wears four battle star also on his theater ribbon. “Progress in medical science is the only good resulting from war,” Captain Mills said, “but the Jeep was Hitler’s secret weapon.” Describing another aspect of the al most unanimously praised little buggy, he told how one hospital visited had half its beds filled with victims of Jeep accidents.

During the operation, one man was killed (Edit 1)   and four wounded; casualties also being suffered by the 82nd Engrs and other nearby troops. Several vehicles were hit, two power boats destroyed, and the bridge itself was lost when someone, thinking it might be used by the enemy, out anchor lines or several floats with the hope of swinging the bridge to shore and instead the whole bridge was carried by the current downstream into Magdeburg. 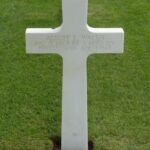 Following this, plans were made by Co “B” to reinforce or rescue as necessity decided the three Bns of Infantry that had crossed in boats. The 82nd Engrs were given the mission of ferrying tanks across, then to construct a bridge, at Schonebeck, farther south. A cable line was strung, a ferry built, and with a boat and DUWK for power the tank loaded craft set out for the far shore, The first shot of an enemy artillery barrage cut the cable, the ferry was brought back to shore, and the operation called off. As many as possible of the Infantry were returned to the west bank of the Elbe in boats and DUWKs 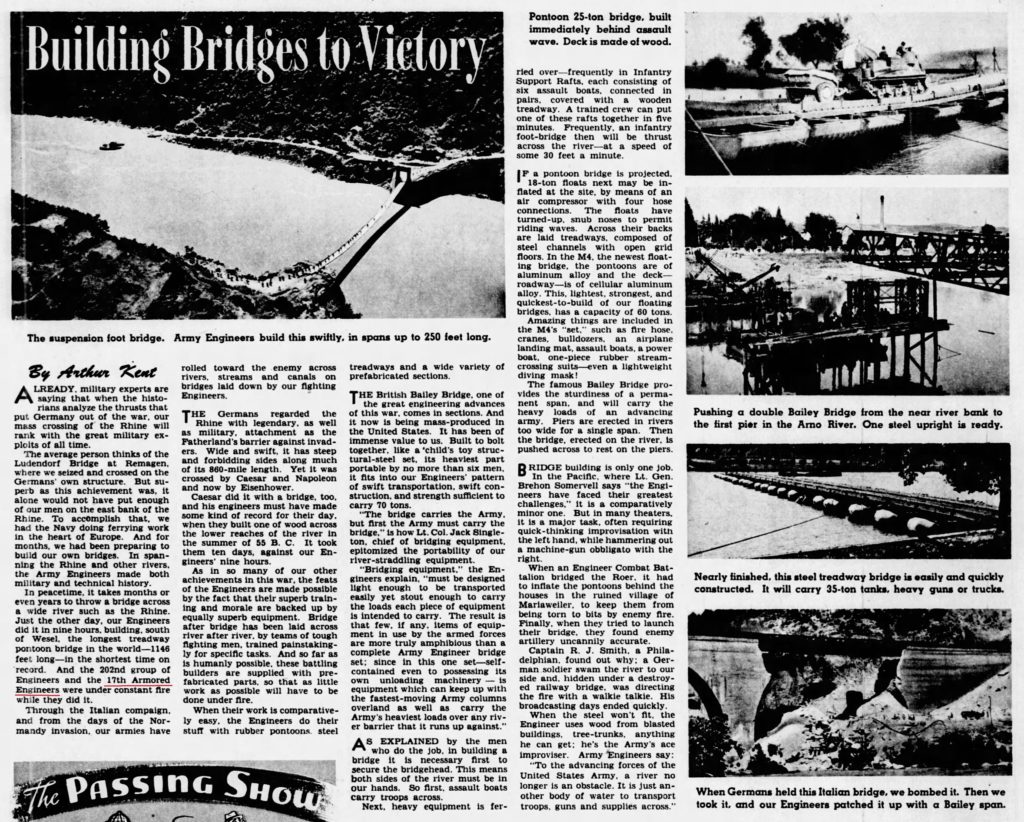