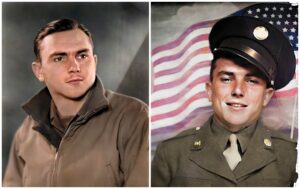 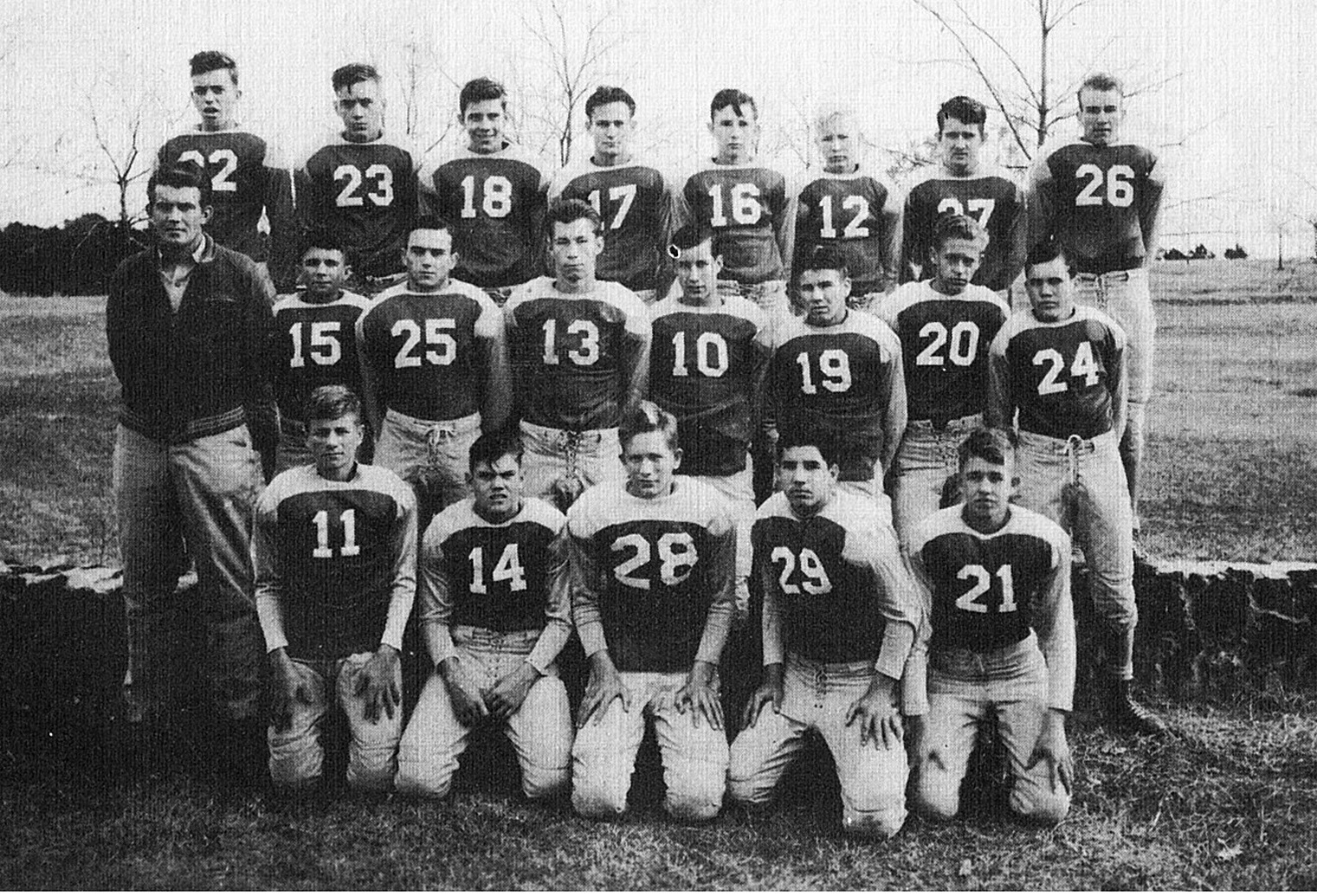 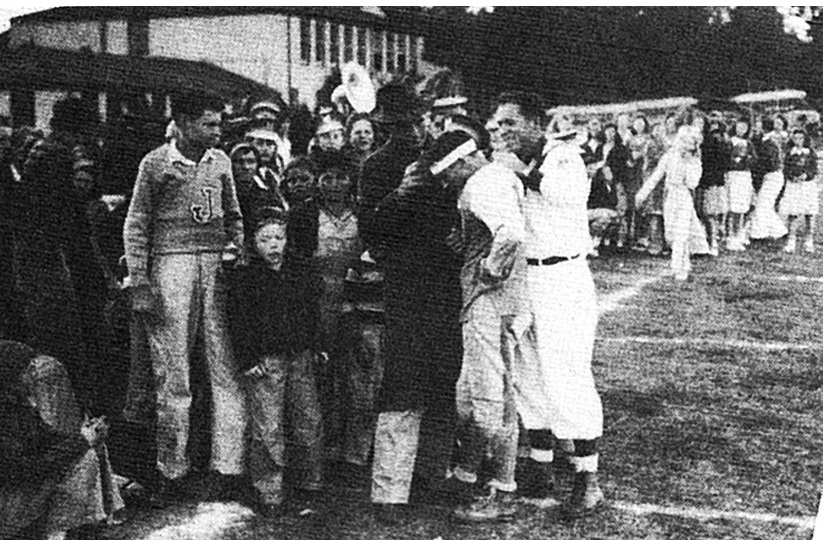 David Edd Hiett with bandaged head after being hurt, Lucille his girlfriend (later his wife) running towards him. (Mark Hiett) 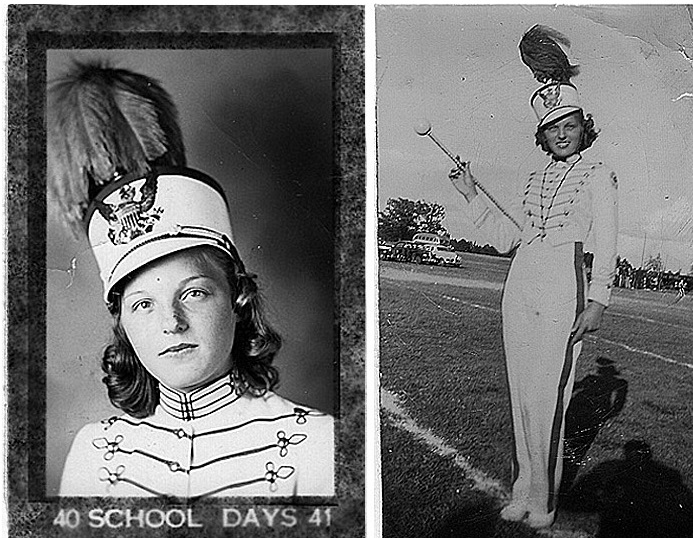 He graduated from Judson Grove High School in 1942.

He was empoyed by the T&P Railway untill he went in the service in March 1943. 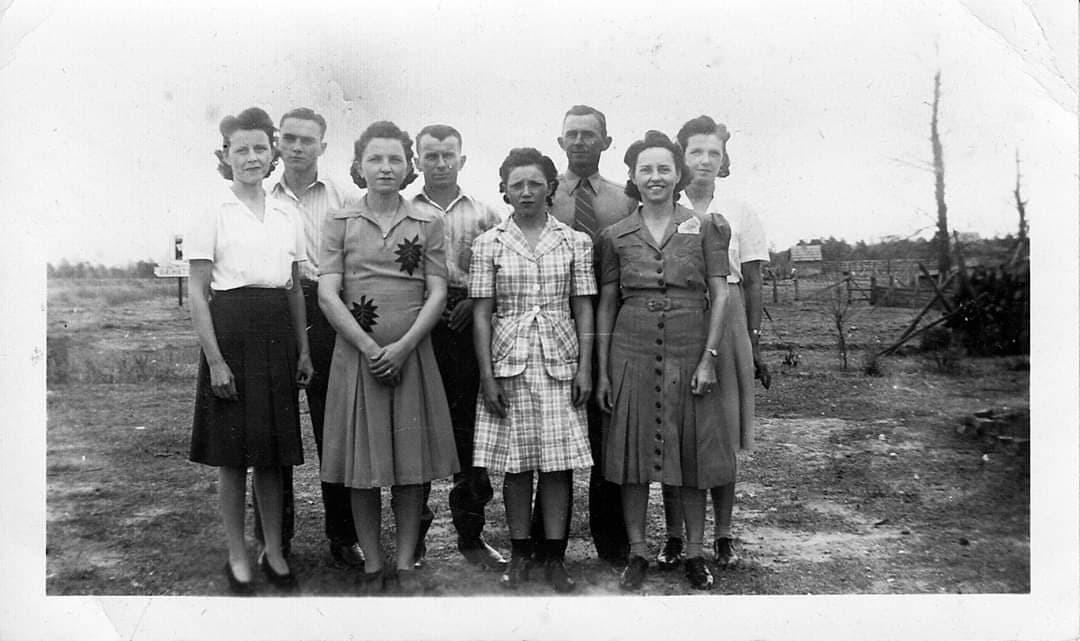 David E Hiett (2nd from the left) with the family before the war (courtesy Mark Hiett) Left to right in front row are: Dymple, Odie, Opal, Ima
Back row left to right Edd, Lam, Charles or Chassie, Clyda 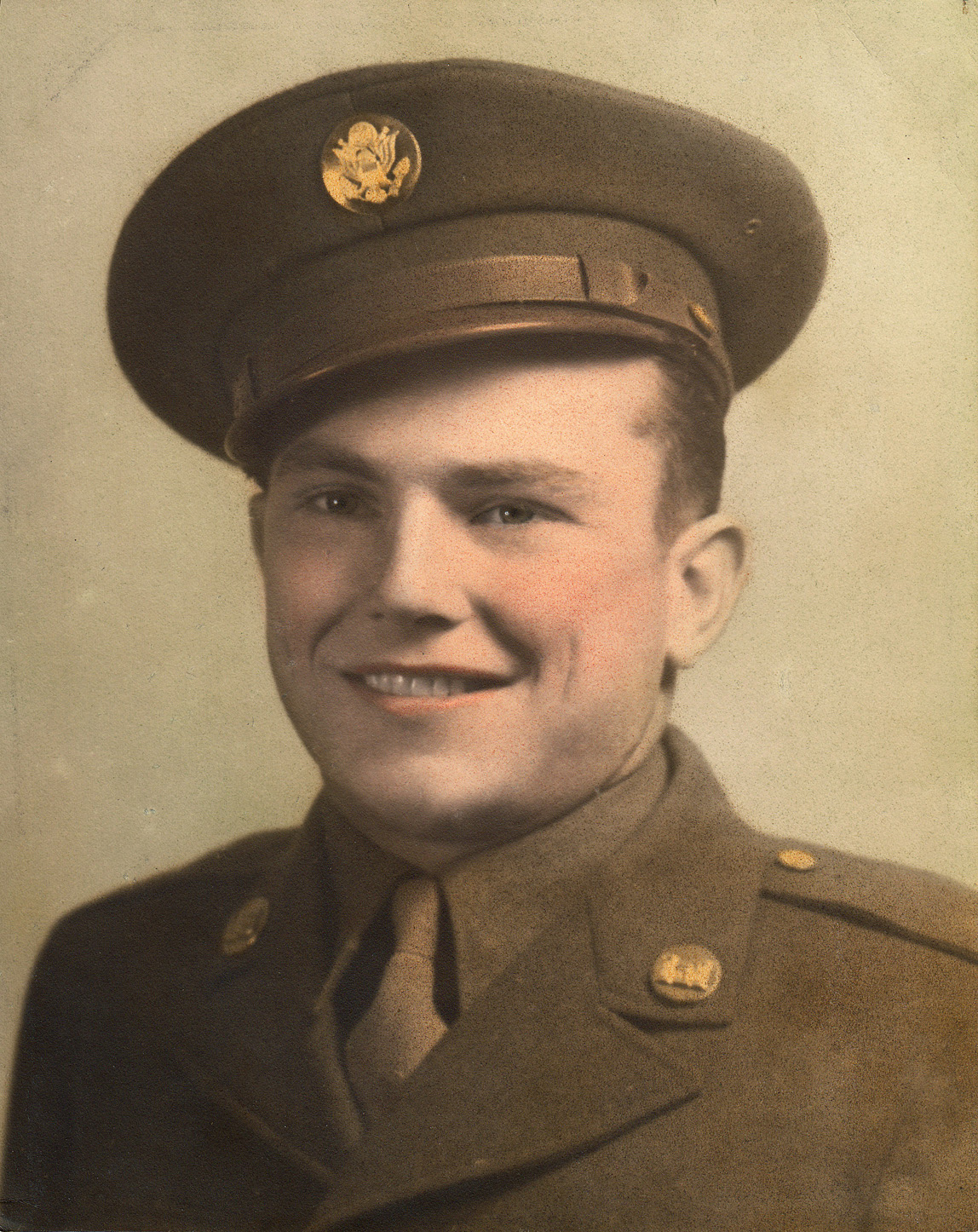 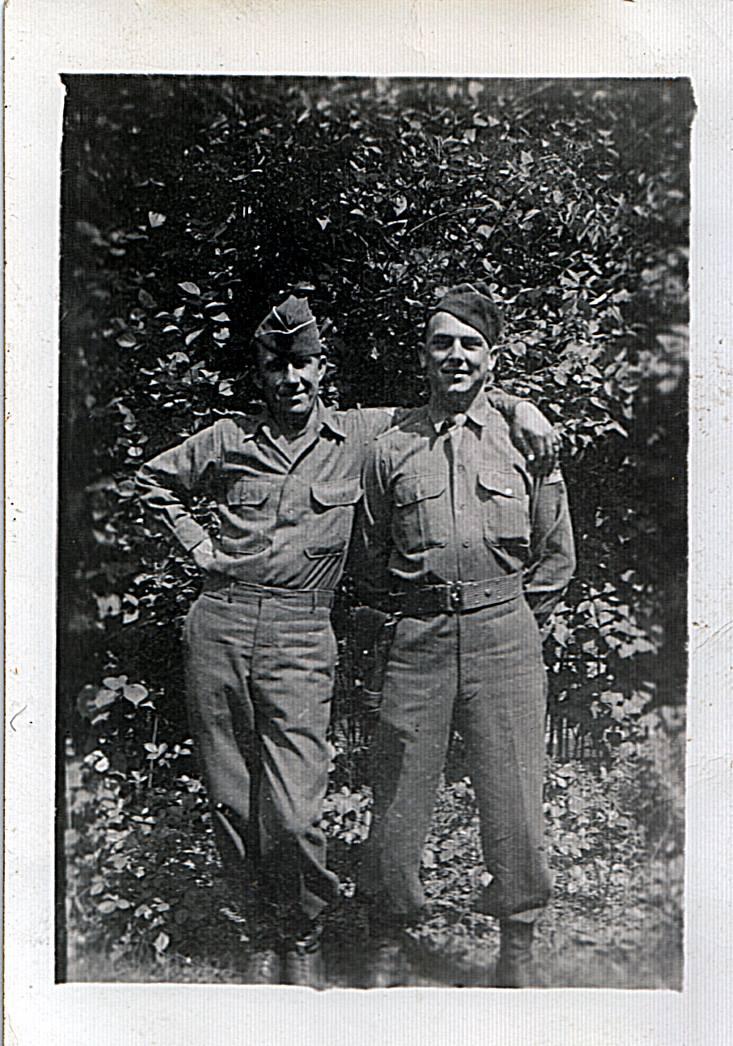 He was very worried that he would be sent to the Pacific after Germany surrendered and get killed fighting the Japanese. He finally got home in November 1945 and he and my mother were married in January 1946. I do not think he ever completely got over the war since he would get emotional when ever he talked about it his whole life. I am sure he suffered from Post Traumatic Stress Disorder. My mother said shortly after he got home he could not sleep unless his pistol was nearby and would hit the floor sometimes when a loud noise startled him. On one occasion a drunk stranger walked into their house and my dad grabbed his pistol and hit him in the stomach with it as hard as he could saying “You son of a bitch I will kill you if you do not get out!” He told me he would have done it too because he had just got home from the war and he would not have hesitated doing it if he had to. Fortunately he did not shoot him and things got better as time passed.

Eddie was an avid fisherman and known as a man ready to help anyone. He proved himself inventive, self-reliant and resourceful. If there was a better way to do something, he would find it. He was a member of First Christian Church and did volunteer work for Meals on Wheels and Salvation Army Stew Pot for Longview Ministries.

In January of 1985 he retired from Texas Eastman Kodak after 35 years of service. 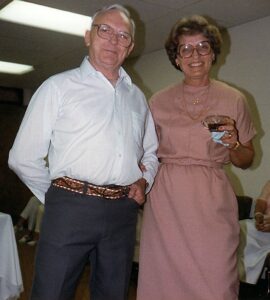 He was preceded in death by his parents, David E. and Willie Hiett; 2 brothers and 3 sisters.

He is survived by his wife of 63 years, Lucille; 2 sons, David Hiett and his wife Tina of Longview, and Mark Hiett of Rowlett; grandson Brian Hiett and wife Blair of Houston; granddaughter Erin Greenlee and husband Matt of Austin; 2 great granddaughters, Nancy Jean Hiett and Ellie Greenlee; 2 sisters, Dimple Lester of Longview and Odie Smith of Allen; and several
nieces and nephews.

He is burried at Memory Park Cemetery, Longview, Harrison County, Texas, US. 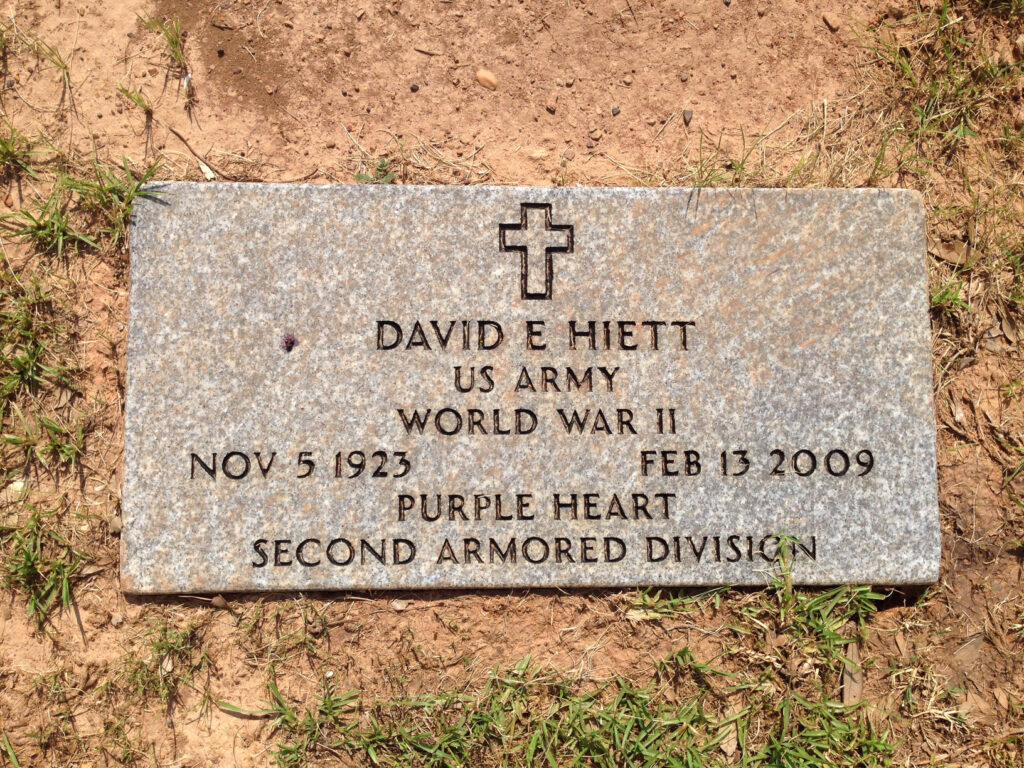 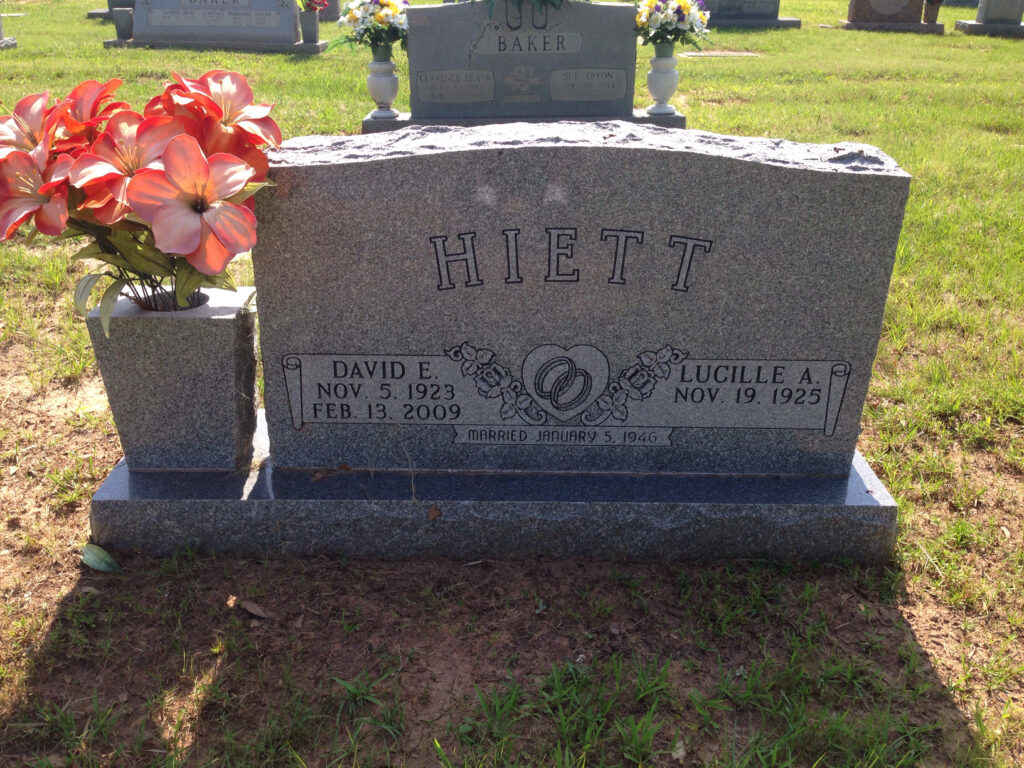 Research and written by Martijn Brandjes in 2019.