The story of Corporal Sam Payne

Once he talked about being somewhere in North Africa and there were wild chickens in the trees.  Naturally, the men were seeing chicken dinner but they were under orders to not fire their weapons, lest they give away their positions to any nearby Germans.  Dad was from a rather rural, country upbringing in Georgia and he had a friend from the state of Tennessee who had the same country skills, so the two of them used an old truck tire inner tube, some string and a patch of leather to make slingshots or “flips” as he called them (I wonder if you know these?).  Anyway, the two of them used their slingshots and small pebbles off of the ground to shoot some chickens out of the trees without making noise.  He said the other soldiers at first didn’t believe it would work but were delighted and impressed to have fresh roasted chicken courtesy of their skills, which were foreign to soldiers from a city upbringing.

Another North Africa story also had to do with getting food, but this was about the problems about getting supplies from the rear to the 17th dat the front.  Apparently, several times the unit would request food for the troops but all that was sent was a truckload of orange marmalade.  Marmalade is sort of like a fruit jelly or jam.  Dad said it was horrible stuff, and certainly not something to feed the men without anything else.  They would get entire truckloads of orange marmalade and nothing else.  So they would use a bulldozer to dig a big hole in the desert, unload the truck into the hole and cover it up. mThen send another request for proper food.  Apparently the trucks of marmalade happened several times.  I wonder if anyone in the desert now has ever stumbled across a huge cache of cans of orange marmalade? 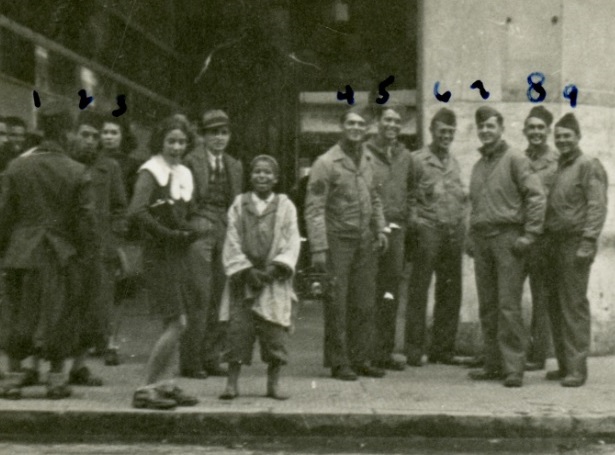 War buddies:  The only name I remember my father mentioning is Frank Rhein.  I heard this name now and then over the years.  My father keep contact with him after the war.

Unfortunately the Hotel was demolished in the 60ties, because it need modernisation and the hotelrooms did not have bathrooms.
Lateron an new Hotel was build that eventually also was named “Imperial Hotel”.

Windmill photographed by Corporal Sam Payne. It as known as a Beltmolen (mill on a small hill) it crushes Corn seed for the Bakery. Het large opening was made for a horse wagons originally that transported the Corns. These openings were made smaller with a small door as in the 50ties the tractors were available. This could be the “Wilhemus Hubertus Mill” at the town of Weert Hushoven, Weert, Holland.

During the winter in Belgium my father told me about finding a goose down quilt in a blown up farmhouse, and how he said that saved his life during the harsh winter.

Another story in the Belgium winter had to do with the US Army sending a series of military academy graduates to the 17th for a brief period in order to gain combat experience for their records.  But these Lieutenants only appeared long enough to be introduced to the men and were then moved to the safety of the rear.  About two weeks later, that one was transferred elsewhere and another new Lieutenant appeared, young, just out of university, clean uniform, minimally equipped because they were going to be in a tent safely in the rear.  Then one day a new Lieutenant arrived with a working rifle, ammo, full combat equipment, very dirty, unshaven, and obviously a very different philosophy of command.  This Lieutenant insisted on staying with the men and suffering the same dangers and unpleasantries they were dealing with.  Slept in the muddy snow, ate the bad food, hit a foxhole during artillery fire, everything.  When he was transferred out, he made a point to shake every man’s hand in Company B and wish them well.  Dad told me that for the first time in the war, he understood what it might mean to be willing to die for his comrade.  He would sometimes tell that story to illustrate the difference between a real leader of men and one who was simply designated, without earning it.

My Mother told me that she had actually traced the children that gave him the shoes in Heerlen.  Truus (girl, 7) and Jo (boy, 5) Wijnen.  Jo is deceased but Truus lived at the time (1990’s) in Israel and wrote my mother a letter about the day US troops entered Heerlen and how happy everyone was to see them and see the Germans flee.

About the colorpencil drawing

It is truly a special portret, by its Art Deco Style, the name of the artist, the situation and timeperiod. And offcourse the circumstances in that Heinz Schulz-Neudamm made the portrait.
The service jacket that Corporal Sam Payne is wearing is a perfect example for at late war (july 1945). We see  his ETO Ribbon with 5 campaign stars, and the good Conduct Ribbon, the Belgium Fourragere,  the Engineer Crests on the revers, and the “Hell on Wheels” tabs under the 2nd Armored patch. He was a Corporal as can be seen on the chevrons, on the cuffs 5 overseas service stripes. One for a half year of overseas service.

Below the signing Shulz-neumann wrote the place he made it, “Berlin, Lankwitz“. Lankwitz is situated in the southern suburb of Berlin. It is normal in Europe that you mention the suburb in a big city. . https://en.wikipedia.org/wiki/Lankwitz

Heinz Schulz-Neudamm (born 7 July 1899 in Neudamm, Königsberg, Neumark, May 13, 1969 in Wiesbaden) was a German graphic artist and illustrator.
Schulz, who named himself after his place of birth, Schulz-Neudamm, developed numerous advertising designs for various film companies, such as Tagebuch Verlorsen (1929) or inherited instincts (1929), until the 1940s. However, he mainly worked for German agencies of American rental companies, including Deutsche Fox (later the 20th Century Fox), Deutsche Universal Film AG, Parufamet and Metro-Goldwyn-Mayer. He created predominantly German premiere films on American feature films, for example to Anna Karenina (1935, with Greta Garbo) and mutiny on the Bounty / Mutiny On The Bounty (1935, with Charles Laughton and Clark Gable).
Schulz-Neudamm was responsible for the design of the ParUFAMet press and the Paramount journal. He also designed illustrations, including portrait sketches for the magazine Filmillustrierte. Since the beginning of the 1950s, Schulz-Neudamm lived in Wiesbaden, where he continued to work for the film industry, including the United Artists.
The original poster for the film classics Metropolis was sold in London in November 2005 for a record price of £ 398,000.

Metropolis, by director Fritz Lang (1890–1976), is generally regarded as a masterpiece of German Expressionist filmmaking and a forerunner of modern science-fiction movies. The film was shot in 1925–26 at the Babelsberg (Berlin) studios of the leading German film company, Universum Film AG (Ufa), and premiered in Berlin in January 1927. This 1926 art-deco poster by German graphic artist and painter Heinz Schulz-Neudamm (1899–1969) was created for the premiere. Only four copies of Schulz-Neudamm’s poster are known to exist, one of which was sold in London in 2005 for a record price of ₤398,000, making it the most expensive poster in the world.

We have another drawing of an 17th Engineer made by Schultz Neudamm of Captain Orville Pickney “Pete” Cowart.

At the end of the war,  he was transfered to the 5th Armored Division, “22nd armored engineer battalion”. That must have been only for a short period. The division was inactivated on 11 October 1945.

When he returned, he went back there simply hoping for any job.  Not only did they hire him, but they offered to make him a sales representative, which was a very good thing since those jobs typically required a University degree and Dad had only finished high school.  The company leadership had great gratitude toward returning soldiers.  I think this was fairly typical in the US at the time.  They sent him to the University of Georgia to take classes in anatomy, physiology, chemistry, biology, all so he could talk intelligently with doctors about Upjohn’s products.  That became his career until he retired in 1975.

He liked to hunt and fish, and play golf.  As he got older, the hunting and fishing faded away but he played golf as long as he was able.  He really loved the game and treated it as much more than simple recreation.

Dad went to a reunion of the WW2 2nd Armored Division sometime in the 1980’s.  It was held at Fort Hood, Texas.  He took these pictures of the 17th HQ building on base while there.

In the 1980’s, the 2d Armored Division put together a trip for veterans and their spouses to travel from the Normandy beaches to Berlin, tracing close to the same route. I remember my mother getting excited.  She was seeing a wonderful tour of Europe, but my fahter was pretty quiet about the whole idea until he finally said that he just couldn’t do it.  He told me that while he knew that the Europe of the tour would be of quaint villages, farms and scenery and all delightful for many people, for him it meant remembering horrible sights, sounds and even smells that he didn’t want to re-live. This was the first and last time I ever sensed that he had been permanently scarred by his war experience.  I remembered him telling me this when I visited the Normandy Beaches a few years ago.  He was exactly right.  It’s all beautiful now, but I didn’t see it under the same conditions that he had.
When my own son was born, Dad had already passed.  I named him “Sam” in my father’s honor.

Research and written by Martijn Brandjes in 2019, edited 06-2021, many thanks to Mike Payne for sharing the information.