Company “B” with a section of the Bridge Company under Lt. Frank Arone left the Bn to come under CC “B” control about 1 June 1943, and went into bivouac on “Mosquito Hill”, four miles southeast of Port Aux Poules. Here the mosquitoes were the worst ever encountered and everyone used nets and repellents as well as atabrin pills to ward off bites and malaria. The company moved bank to two miles southwest of Port Aux Poules on 15 June and remained there until It embarked at Oran on 3 July. Capt. Fry and a halftrack from the Medical Detachment joined the company June 30th . Prior to shipping, training with mines and bridging, intermingled with hikes and swimming in the Mediterranean, was carried on, and the morale of the men was high. The Company had streamlined for the operation by leaving behind 35 men with four 2 1/2 ton and four 1/4 ton trucks. The 3rd Platoon, bridge and medical detachments loaded on a LST, the remainder of vehicles with drivers under the command of Lt. Hazzard and Lt, Schofield boarded the “Nicolas Gillman” and Co. Hq was on the Kool Force flagship, “Oriz Arba”. Lt. Col. Hurley also was on this ship as Task Force Engineer.

The men on the ship “Oriz Arba” arrived at Gela, Sicily at 0400, 10 July, started ashore at 2200 that day and reorganized early the next morning with CC. “B” in an area four miles northeast of Gela. There the force was counterattacked by approximately 35 German tanks at 1000, and in the fighting that followed some of the enemy armor reached positions within 400 yards of the Engr Company. However, 12 of the enemy tanks were destroyed and the enemy pushed back. There were numerous enemy bombing and strafing attacks throughout the day. During the evening of 11 July the 3rd Platoon came ashore, and throughout the night paratroopers landed in the bivouac area.

Lt. Col. Hurley, his driver Pvt. Pasturesak, and two officers from outside the battalion, Major Dreydopple and Lt. Mitchell, were in a jeep out on reconnaissance for a water point site near Butera the 14th of July, when the vehicle entered a minefield and the entire party was killed by exploding mines. Lt. Col. John Chambers was assigned to the Bn. two days later, and became Bn Commander and Division Engineer. 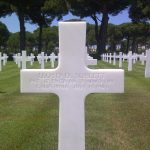 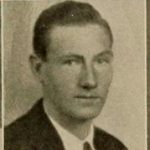 (Edit 2: Driver private Andy Pasztorcsak was Killed in action when he drove his Jeep in a minefield on July 14th 1943) 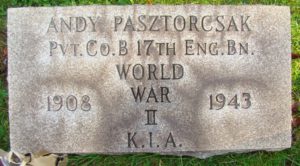 Edit 3: Lieutenant Colonel Henry Hurley was Killed in action when his Jeep drove in a minefield on July 14th 1943) 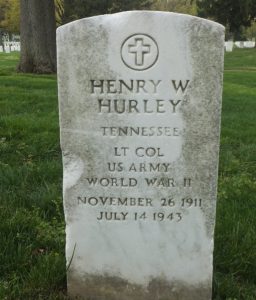 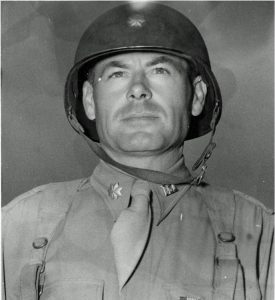 Sweeping roads for mines, performing maintenance on roads and company vehicles and weapons occupied the period 15 to 18 July, when Co. “B” moved to the vicinity of Campobello, On 19 July the 1st Platoon was attached to the 82nd Rcn Bn and the company moved near Agrigento. Two days later a move was made to Rjbera and on to the site of a blown bridge on the Belice River, where the Engrs improvised a crossing by knocking down banks and placing tread ways across the stream. Pvt Richard Boynton was killed when an Italian B2 mine exploded while he was removing it four miles west of Menfi and Sgt Ben Westbrooke and Pvt. Junior Carr and Max Grzegorczyk were injured by the explosion. The 1st Platoon rejoined the company after having seen considerable action with the 82nd Rcn Bn. 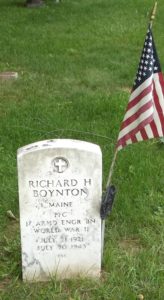 On 22 July the advance began on Palermo, with the 3rd Platoon still in the Advance Guard of the Combat Guard and the remainder of the company in the front of the main body. On arrival near Palermo, Col. White, CC “B” commander, gave the Engineers the mission of making advance reconnaissance of three routes into the city. As the routes had not been previously travelled by friendly troops, the men expected to be fired on at any minute, but to the surprise of all, everyone met them with shouting and clapping of hands and clambered all over the vehicles, Two of the routes were found to be blocked by large sections of the road blown out alongside the steep mountains, Palermo was taken this day by CC “A”, but CC “B” was ready to enter from the west, and bivouacked three miles northeast of Terracini for the next three days during which the company filled in road blocks with the aid of Italian prisoners and removed more minefields. On 26 July Co. “B” joined Co. “A” in an olive grove one mile west of Capaci where a provisional battalion was set up under Lt. Col. Chambers.

Malaria had made some casualties with the 17th Armored Engineer Battalion 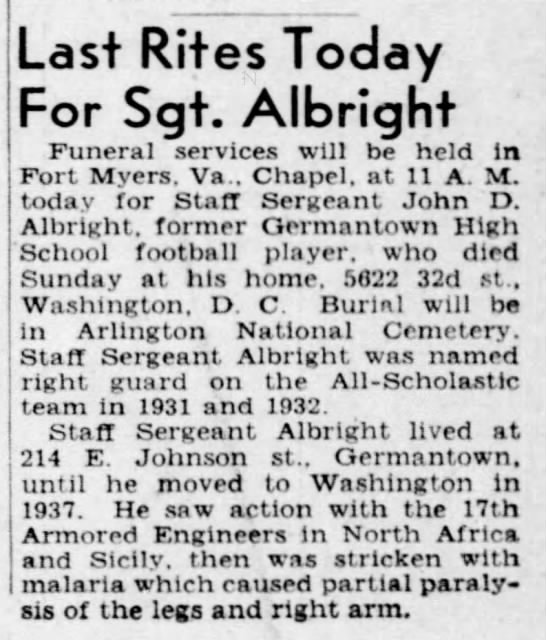 Funeral services will be held in Fort Myers. Va.. Chapel. at 11 A. M. today for Staff Sergeant John D. Albright. former Germantown High School football player. who died Sunday at his home. 5622 32d at , Washington, D. C. Burial will be in Arlington National Cemetery. Staff Sergeant. Albright. was named right guard on the All-Scholastic team in 1931 and 1932. Staff Sergeant Albright lived at 214 E. Johnson st.. Germantown, until he moved to Washington in 1937. He saw action with the 17th Armored Engineers in North Africa and Sicily. then was stricken with malaria which caused part tat paraly-sis of the legs and right arm. 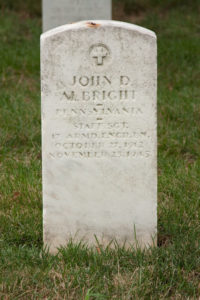