Before Francis Turner enlisted for his service in the Army

His father Charles J. Turner was a farmer and his mother Louise E. Turner was a teacher, which was unusual for the time graduated from Edinboro Normal School in 1917.

Francis was the oldest of 9 children.  His brother Jim, one year younger would later server in the pacific theater and stayed in the military until retirement. 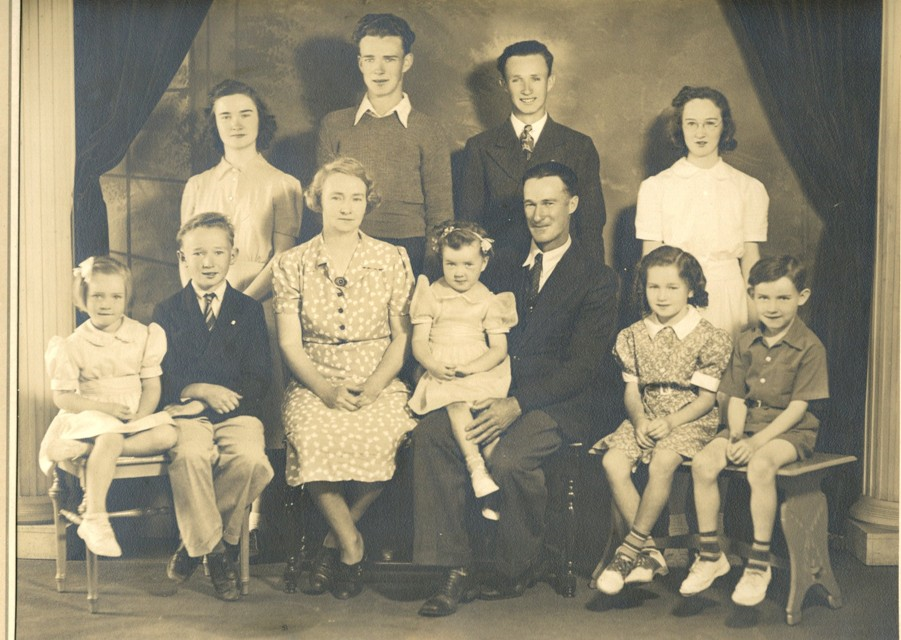 Father, Mother brother Jim and sisters of Francis Turner. Mr Turner in the back row on the right 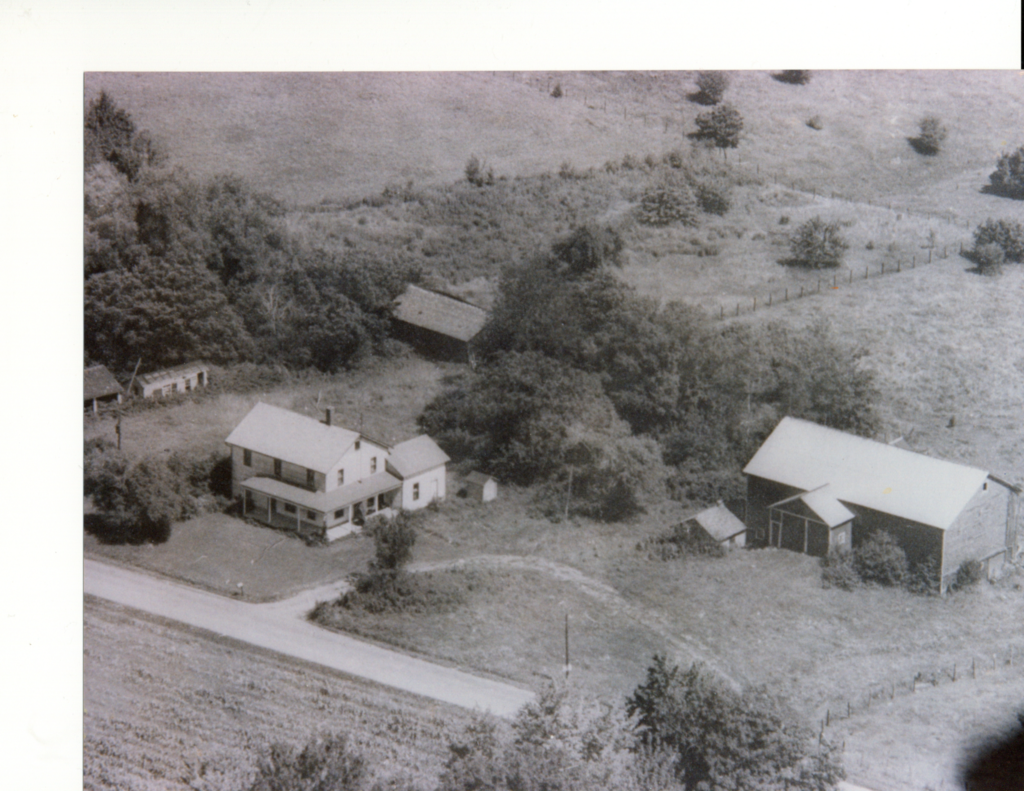 After the year 1930 Charles and  Louise recieved three more children by the name Robert, Rita and Lucille. 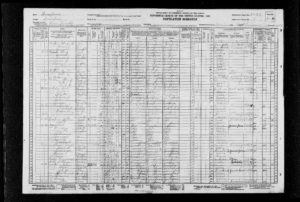 Centerville, Pennsylvania is a rural farming area. Here hardwood forests cover the mountains that surround the rolling fields of the Allegheny Plateau. In 1940, Francis Turner would say he was from the Mageetown which was (and still is) a farming community. The population of 200 was exclusively comprised by the descendants of eight original families that emigrated from Ireland 1797. They all belonged to the Immaculate Conception Catholic Church built there in 1848. Clarence Winton and Francis Turner were friends and grown up and gone to school together in the one room school house that sat across the street from the church.

Francis Turner joined up because his road work job had ended for the season (in this area of Pennsylvania “lake effect snow” averages 100+ inches a winter.) He had been stone basing the road from Riceville through Little Cooley to Centerville for $1.50 a day. This was hard work breaking up rock, laying it and leveling it by hand. He knew his draft number was 270 and seemed certain at he would be called up in April by his birthday so he enlisted. He laughs and says, “I thought the army couldn’t be much worse than breaking rock?….”

Clarence Winton and Francis Turner joined up January 1941 in a “Pittsburgh Recruiting Station” where they took a physical of general health and both passed. They were immediately shipped out together with a number of other recruits by way of “Harrisburg”. He graduated from basic training, Francis Turner gained the rank of Private First Class. 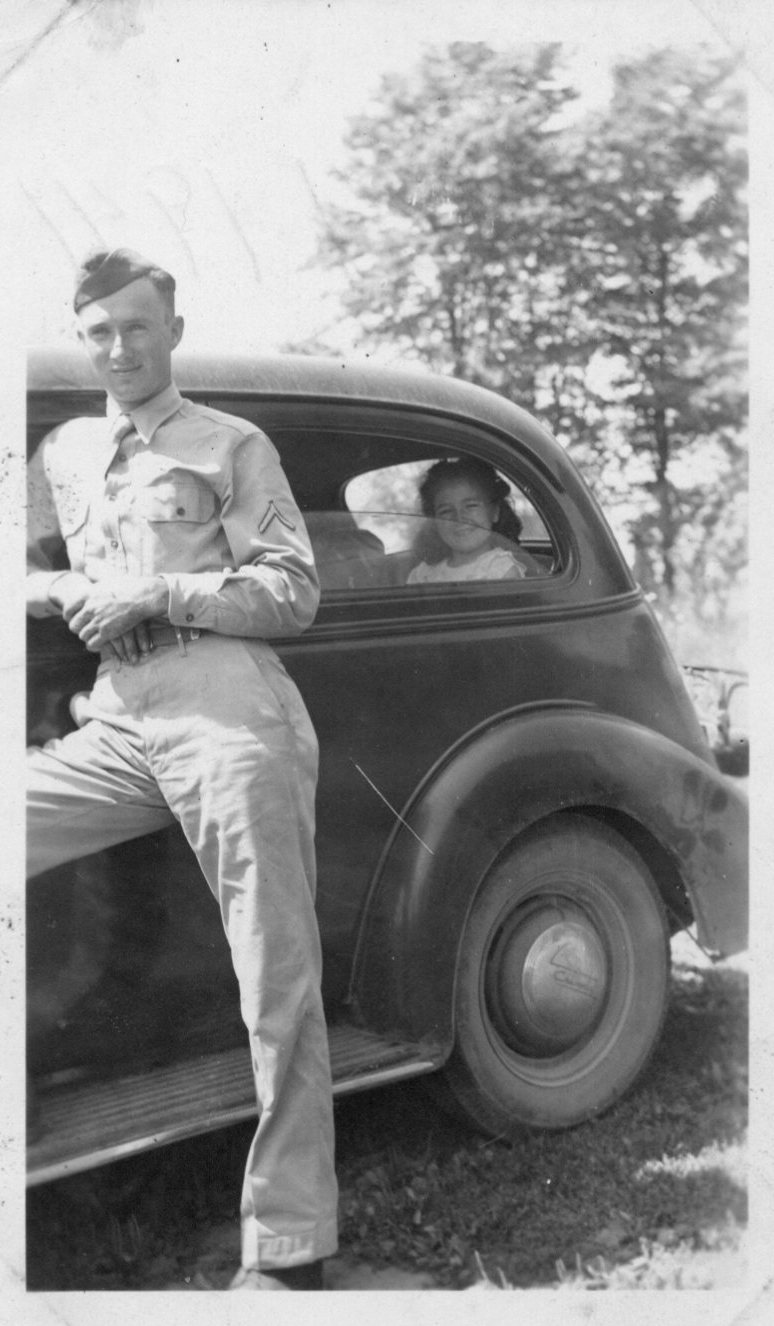 Daughter of Mr Turner, Susan J. Benninger told us more about this photo;

He came home for a month after getting his stripes.
He was skinny by modern standards, 5’10 and weighing less than 140 pounds.
He’d worked like a man, helping on his father’s and Uncle’s Farms.
And before he went to the Army he worked breaking rock and laying the foundation of a road.
So he was very strong. Here Private First Class Francis Turner is standing by his Aunt Edith’s car.
His middle sister Pauline is in the car. 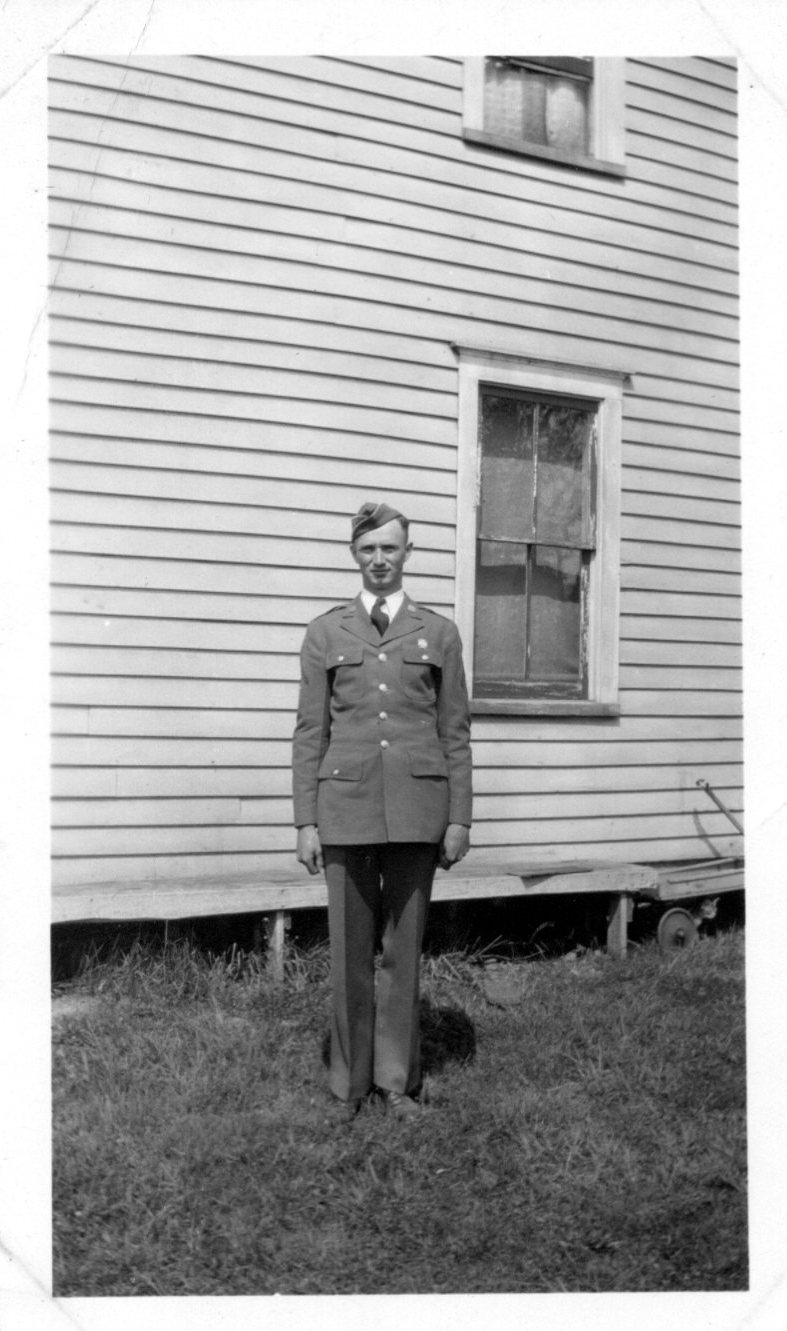 Then Clarence and Francis were given tests, academic and aptitude and after completing basic training, they both having done very well were placed in Officer Candidate school .
They next went with 8 other recruits to “Fort Belvoir” for the Officer Candidate School.

Mr Turner went to Officers Canididate School and in July 1941 assigned to the 31st Engineer Company at Fort Belvoir, Virginia as seen in the photo below.

On the day that this Company was originally constituted (formed) and activated on 1 July 1940  as the 31st Engineer Company, this photo below was made with Francis Turner in the group of Officer Candidates. 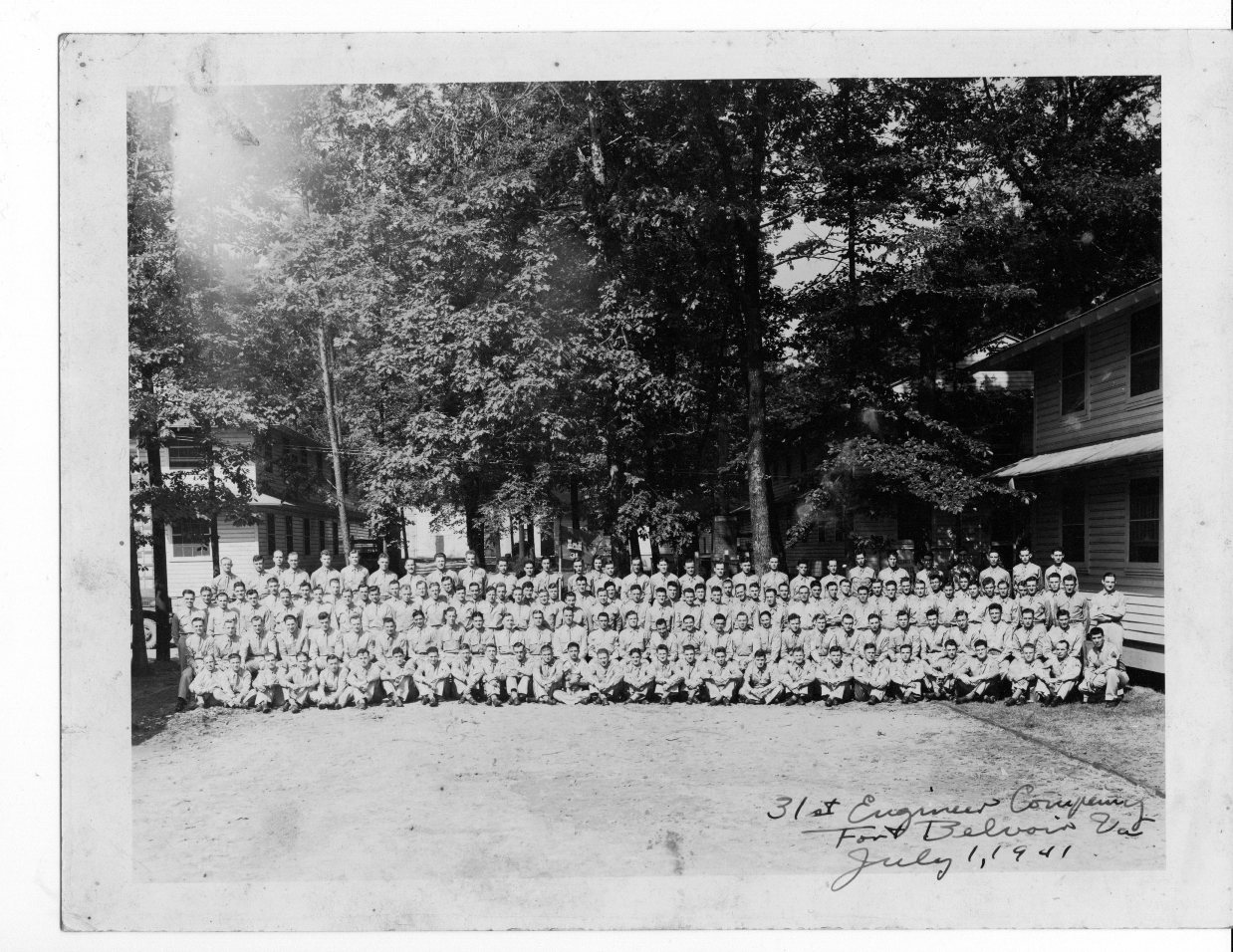 Then as an Private First Class, Mr Turner was part of a group of who were giving classen and demonstrations to Reserve Officers who were being called to service at fort Belvoir. Mr Turner was a “rigger” and a specialist in tying knots. They demonstrated building different bridges and helped at the firing range. Then Francis was selected for attending the Officers Cadidate School himself. He went there together with Sergeant Sweeny.

“You could not show any emotion when the Sargent got in your face about minor or contrived infractions.This was a test of your ability to maintain composure. As an officer you can’t react from emotion. You have to stay in control. Clarence couldn’t keep calm or quiet. So he was out.”

He was assigned to the “Post Engineers Office” and then “381st Construction Battalion” and Camp Attebury he was sent there with 4 other newly graduated officers, but there were no soldiers in the “381st Engineer Construction  Battalion”.
The Army didn’t know what to do with any of them there, so he was given a 30 days leave.  When he came back from leave he was sent to Fort Knox Kentucky. 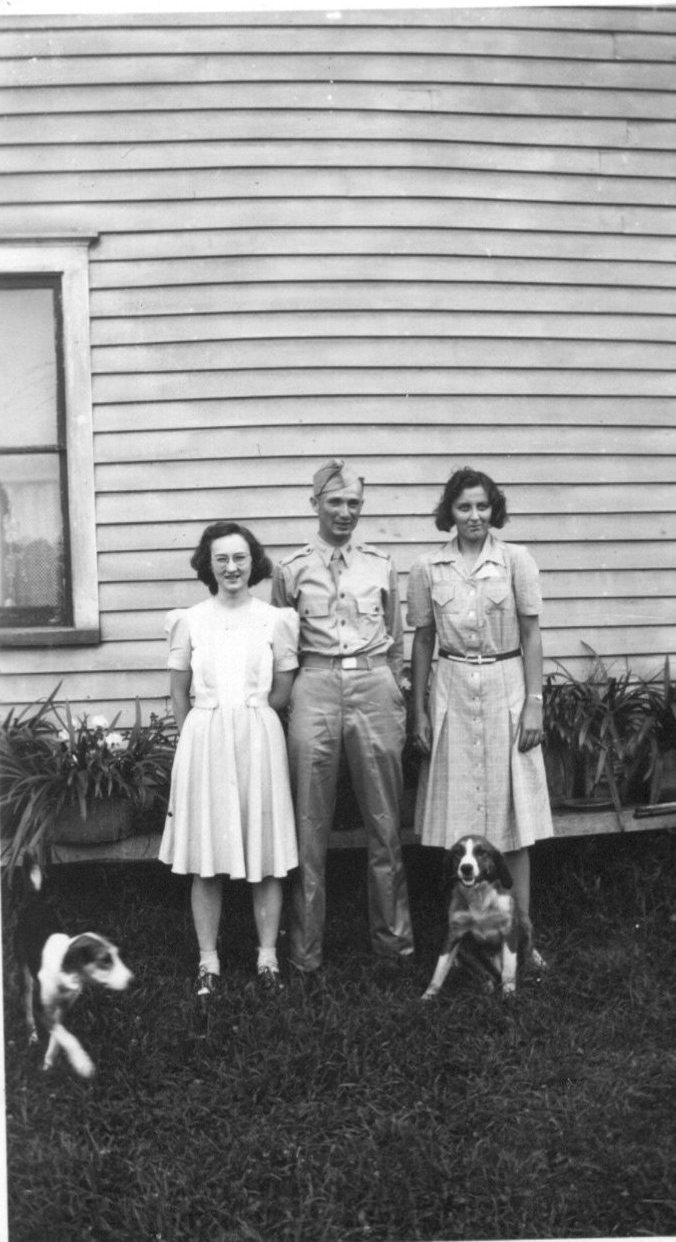 They sent him to Fort Knox where the “382nd Engineer Construction Battalion” was, that did have soldiers. The newly formed 382nd Engineer Construction Battalion was made up of all black recruits to be commanded by white officers. It was an experiment in integration. Mr Turner said he really didn’t want to be part of an experiment and he requested to Colonel Jones, Battalion Commander, a transfer to a combat unit. So after another month he was on the train to Fort Bragg and was assigned to the 17th Engineer Battalion (Armored), Company D.

A train was loaded in Fort Bragg and transported to a Cargo ship called the AK 121, on board the ship were loaded 108 vehicles.
31 of those vehicles consisted of 31 M5 Stuart Tanks. They departed from chesapeake bay and docked at Port Aux Poules, Africa.
Francis was one of the few soldiers aboard for loading and unloading the vehicles.

The next assignment was to help assisting with loading an Coastal Steamer with 500.000 Gallons of Aviation Gasoline and Ammonition and Bombs.
When loades the departed for Casablanca, and not far out the ship got torpedoed. It had made 5 holes in the ship, one man was wounded by as steel door that had blown of and hit him in the head. A destroyer picked the people up who were aboard and the ship was towed to shore and unloaded.

Then Company D went to Rabbat, followed up by Mustaganem and ended up in Algiers. Company D stayed in North Africa as Divisional Reserve and did not Participate in the Sicilian Campaign.
Francis was re-assigned and was shippedto England to prepare for what turned out to be the D-Day invasion. There he shared a room with Captain Youngblood and Grady L Smith. Mr Turner was  an PX-officer and the Mess officer at Tidworth Barracks. 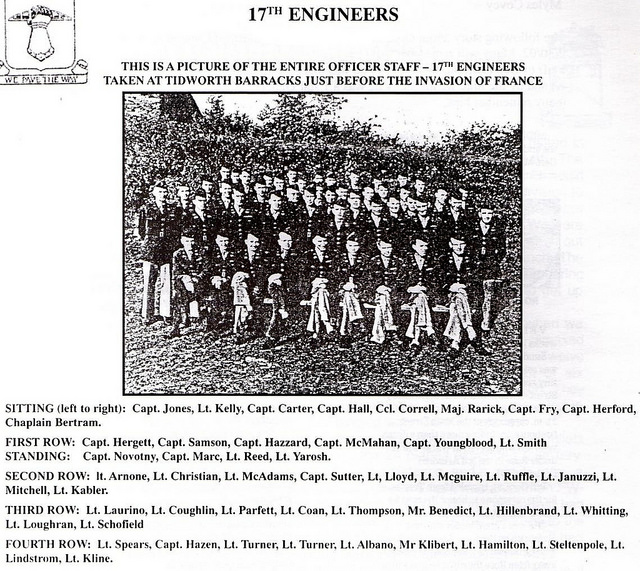 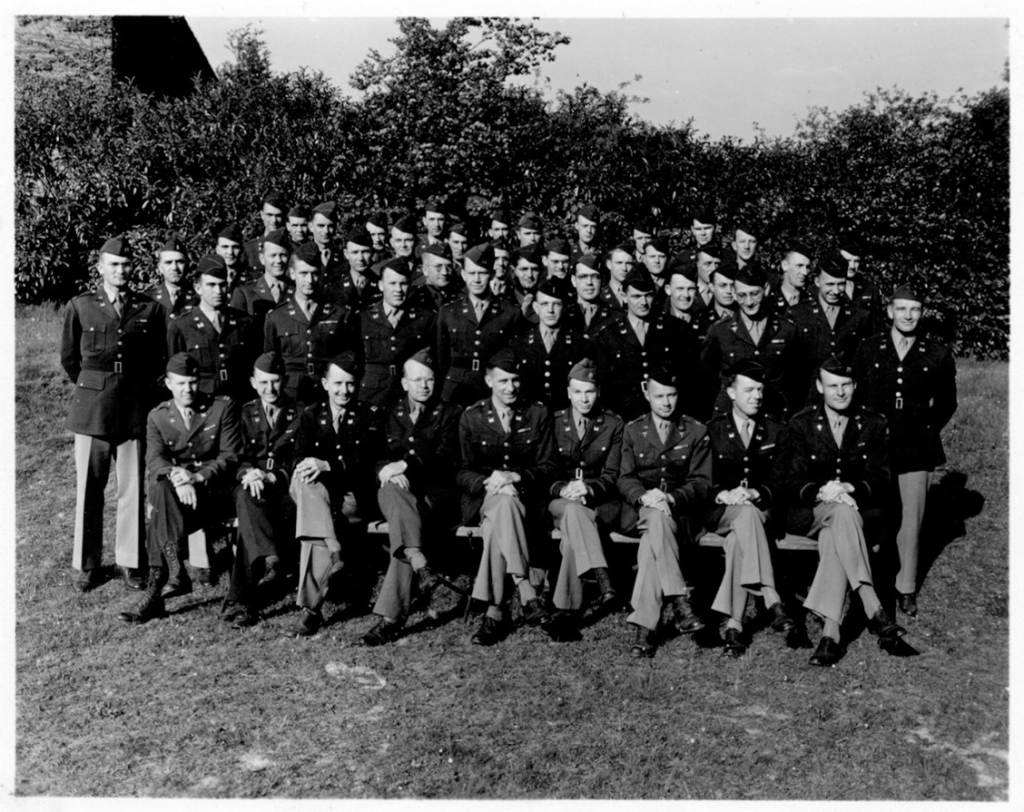 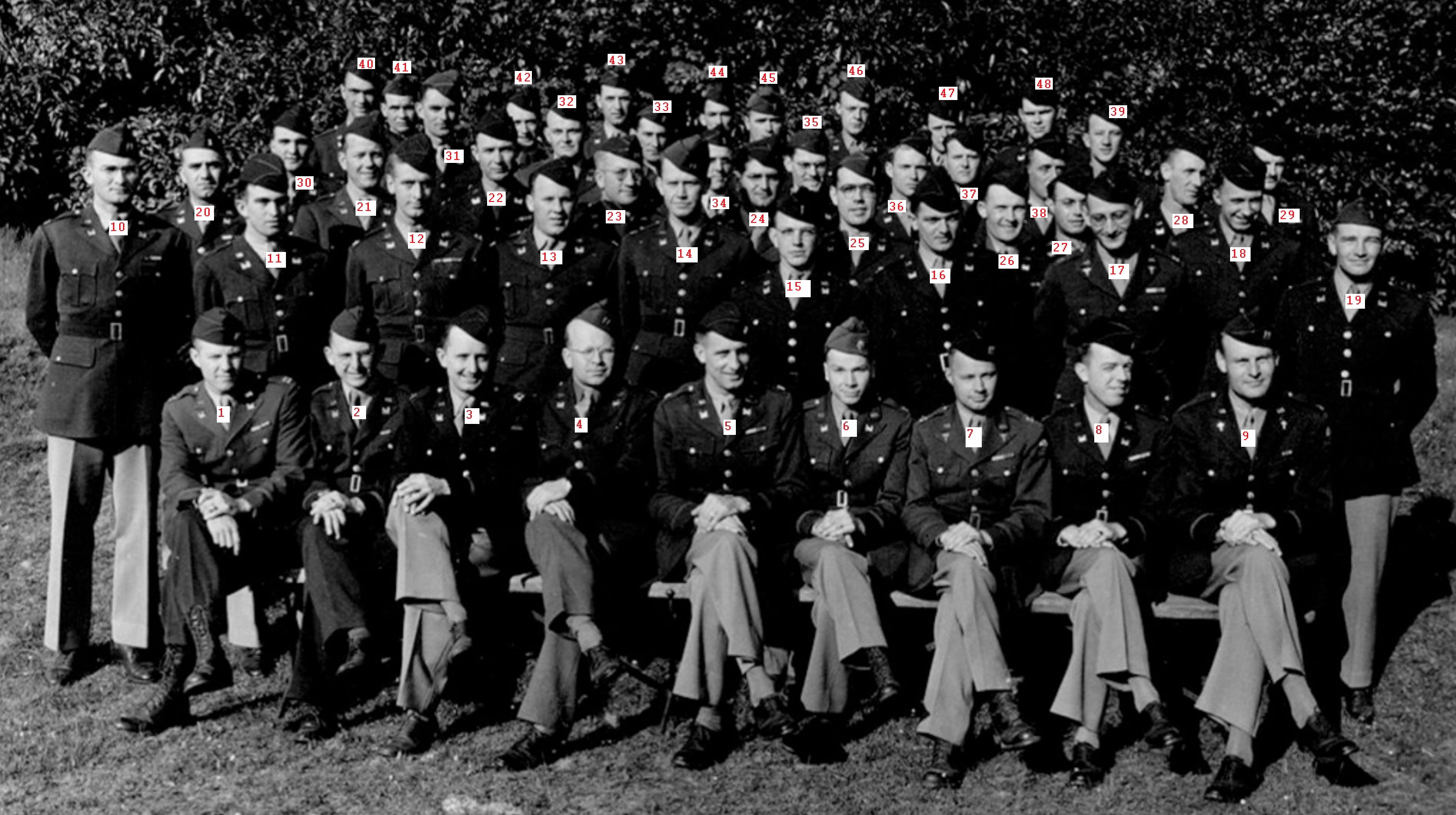 More about the names of the Officers: Officers of the 17th Armored Engineer Battalion

When 2nd Lieutenant Turner went to Normandy, France,  he was an “Recon Officer” in “Headquartes Company” 17th Armored Engineer Battalion for the Battalion HQ. Mr Turner told in on the intervieuws he had a “Seep” (amphibious Jeep), driver and a radioman. His unit was part of the second wave that landed to establish a beachhead before heavy armor such as tanks could be sent over.

When Captain McMahan and Lt Christy were killed on July the 27th 1944 Francis was tranferred to A Company under Company Commander Captain Gretzelon (Grady) Hazen. Mr Francis Turner was s S-2  Military Intelligence officer (liaison-officer), on battallion level.
He was sent for the Company Commander Captain Hazen to get the orders from Combat Command A Headquarters and transfer them to Company A HQ, the next morning the were on their way to the next objective.

Lieutenant Francis Turner was awarded the Bronze star for an operation at night on the November 21st, 1944.
Article Newspaper Bronze Star 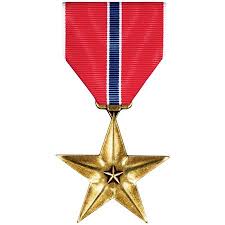 The official citation for the Bronze Star Medal awarded to First Lieut. Francis C Turner, Son of Mr. and Mrs. Charles Turner of Route 3 Centerville, was received recently by the Lieutenant who was discharged from the Army on September 27, 1945.

Lieut. Turner was awarded the Bronze Star minus that citation in June of last year. Since that time he has been in operations against the enemy in removing a road block while under direct fire near the Herman Goering Steel Works at Brunswick, Germany, early in April 1945.

His citation for the Bronze Star Medal is as follows:
‘’On the night of 21 November, 1944, Lieutenant Turner led a mine sweeping party from Puffendorf, Germany, along the main road toward Friealdenhoven, Germany, the latter town being the immediate objective for the advance scheduled the following morning. Lieutenant Turner’s mission was to clear a gap to and over the tank ditch in order that the tanks could deploy over the flat ground to attack the town. He completed his mission despite the fact that enemy patrols were active in the area. After daylight the morning of 22 November, 1944, it was found that additional gaps would be required. Lieutenant Turner and one mine detector operator cleared the additional gaps in full view of the enemy. This work and accomplishment directed by Lieutenant Turner reflected high credit upon himself and upon the military service.

Read more about the context of this operation here: Phase III – The Push to the Roer River

Now out of service.

For ‘’extraordinary heroism’’ in military operations against Germany, Francis C Turner, who obtained his discharge from the service on Sept. 25 was awarded the Silver Star medal.

As a first lieutenant in the 17th Armored Engineer Battalion of the Second Armored Division, Turner led his platoon as they, under direct German fire, removed road blocks in the vicinity of the Herman Goering Steel Works at Brunswick early in April. The operation took about a day and it was there where Turner’s men had their heaviest losses of the war—two men killed and two wounded.

The Mageetown man wouldn’t talk much about the experience. It was just something that had to be done and he happened to be there at the time to do, he said.
He had 128 points when he was discharged, and his awards besides the Silver Star and Bronze Star were the Croix the Guerre, ETO ribbon with seven battle stars, Bronze Arrowhead for the North African landing, and he is authorized to wear the Fourrager, but doesn’t have it yet.

Turner is home with his parents, Mr. and Mrs. Charles Turner, of Mageetown (Route 1, Centerville).

Edit 1: one of the men that was Killed in Action on the 10th of April 1945 was PFC Albert Clark, (Company A, First Platoon)

The name of the other Engineer that was Killed in Action is Private George H Davisson. (Company A)

Edit 2: ( Source: After action Report Company A, in Combat Command A.)
Report for Operations for Company A, 17th Armored Engineer Battalion for period from april 1945 to 30 april 1945, inclusive.
10 April 1945: Company less two platoons moved out in Combat Command A column and closed in an area in LICHTENBERG (C748957) at 170:00 hours.
Waterpoint was installaed at (c703950). The enemy concentrated artillery air bursts in this area and two enlisted men form first platoon were killed (and two wounded).

Read more about the context of this operation here:  Phase II – From the Rhine to the Elbe 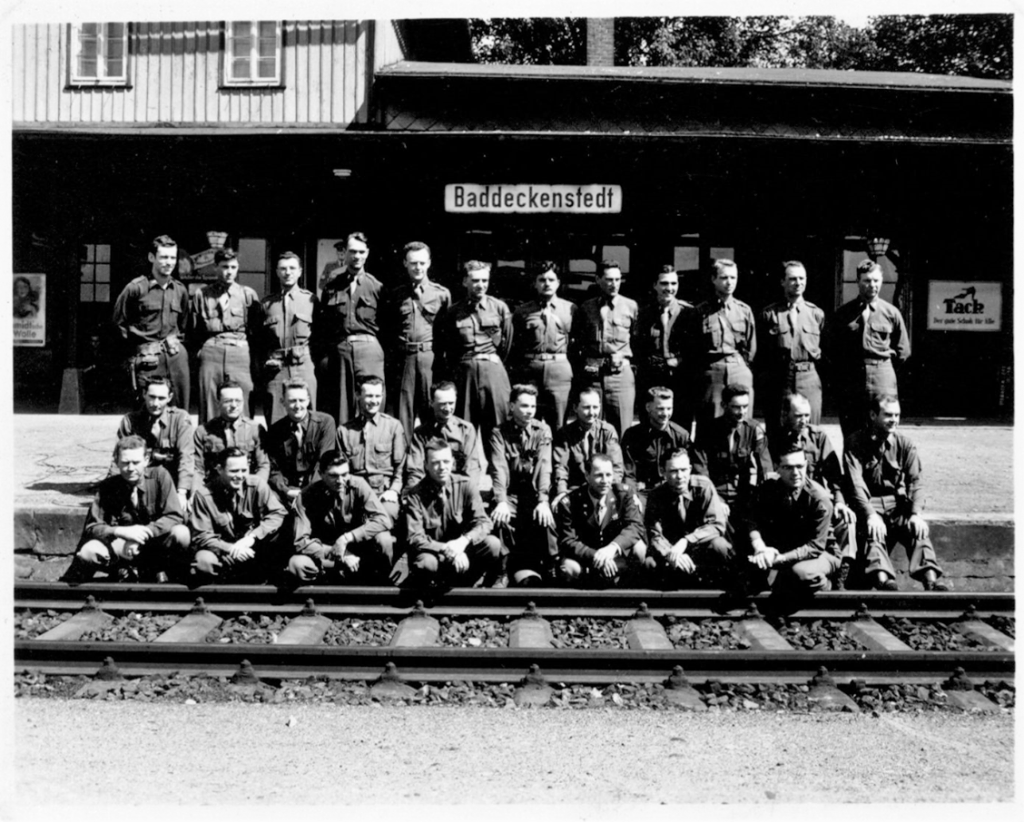 The 17th Engineers were the first army combat unit to enter Belgium and then into Germany but waited outside Berlin until the Russian could enter first. 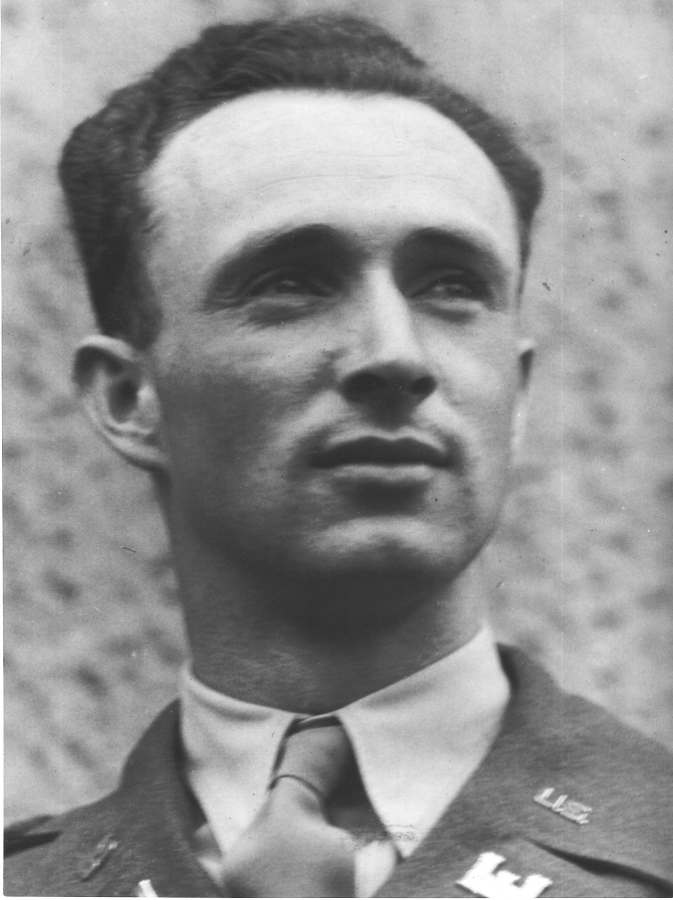 Mr Francis Turner ended his career as an Company Commisioned Officer in the rank of Major. He was discharged from service at September 27th, 1945.
After the war he went in the army again, he stayed in the Army Reserves.  He went to University on the GI Bill as so many soldier did after the war.

He admired Captain Youngblood. This officer impressed Francis by being the most honorable and respectable “Southern Gentleman”. A man from the state of Louisiana “the deep south” I’m sure his demeanor and manner and speech were elegant and something Francis had never seen before. (The 2nd Armored Division was made up of recruits mostly from the southern eastern states)

More information on Captain Youngblood on this page. 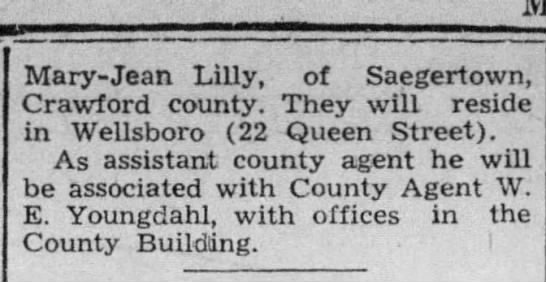 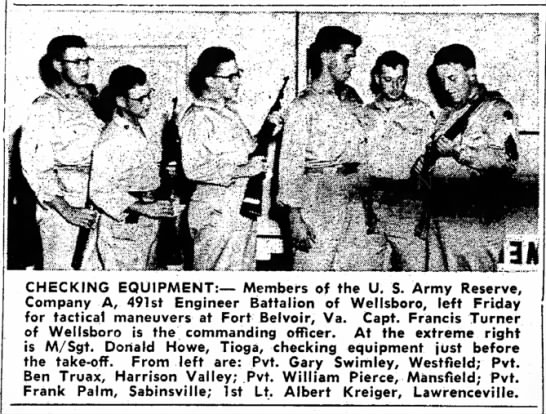 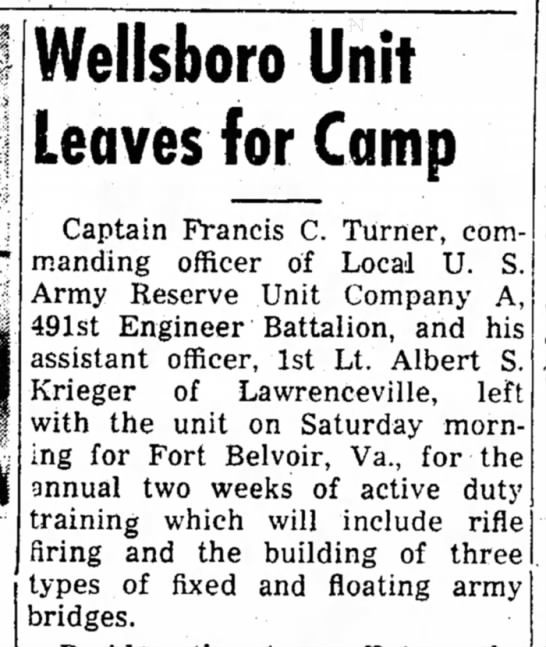 Our Living history group met Francis a few times in Europe and he did tell us al lot about the 17th Armored Engineer Battalion. He has an sharp mind and a lot of stories to tell. 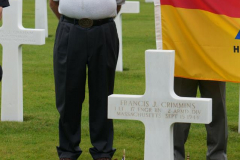 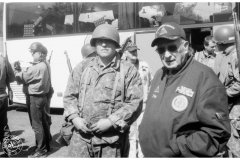 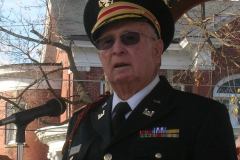 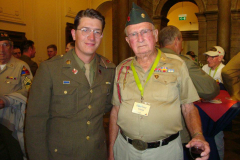 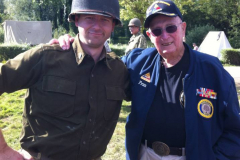 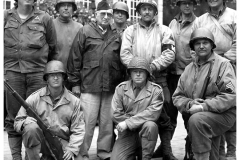 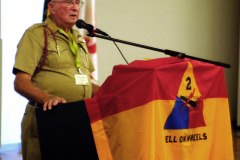