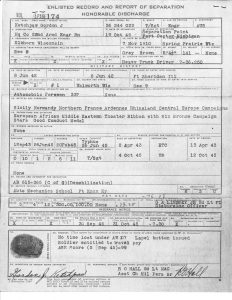 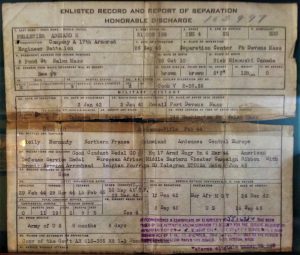 The 17th Armored Engineer Battalion is cited for outstanding performance of duty in action against the enemy during the period of 22 December 1944 through 17 January 1945, in which the spearheading armored elements of the German Ardennes break-through were first stopped and annihilated and then the remaining enemy forces in the western half of the bulge cut off from their retreat to Germany. The gallantry, superior professional skill, brilliant teamwork, extreme individual ruggedness and will to close with the enemy by the members of the 17th Armored Engineer Battalion during this period materially assisted the 2nd Armored Division in all its advances against a determined, tenacious enemy, as well as overcome almost insurmountable obstacles imposed by weather and terrain.
The men of the 17th Armored Engineer Battalion, in heroic infantry fighting, repeatedly attacked fortified towns and heavily defended enemy road blocks in face of murderous fire from German tanks, assault guns, artillery and dug-in infantry armed with mortars, machine guns, and other small arms.
In spite of the almost continuous dismounted combat, no essential engineer functions were neglected.
An extremely cold Ardennes winter provided ice conditions which mad tank operations impossible, and heavy snows which completely blocked the few inadequate arteries of traffic, covered mines, and made their removal additionally hazardous.
The superhuman efforts of the 17th Armored Engineer Battalion, together with the daring and determined spirit which knew no limitations despite extreme exhaustion and battle weariness of the individual engineer, culminated in the encirclement and virtual annihilation of the German 2nd Panzer Division and in the advance south to line up with the Third Army south of Houffalize, thus cutting the German salient in half.
(General Orders 79, Headquarters 2nd Armored Division. 31 October 1945, as approved by the Commanding General, United States Army Forces, European Theater (Main).)

Citation from: Department of the Army General Order 28-48 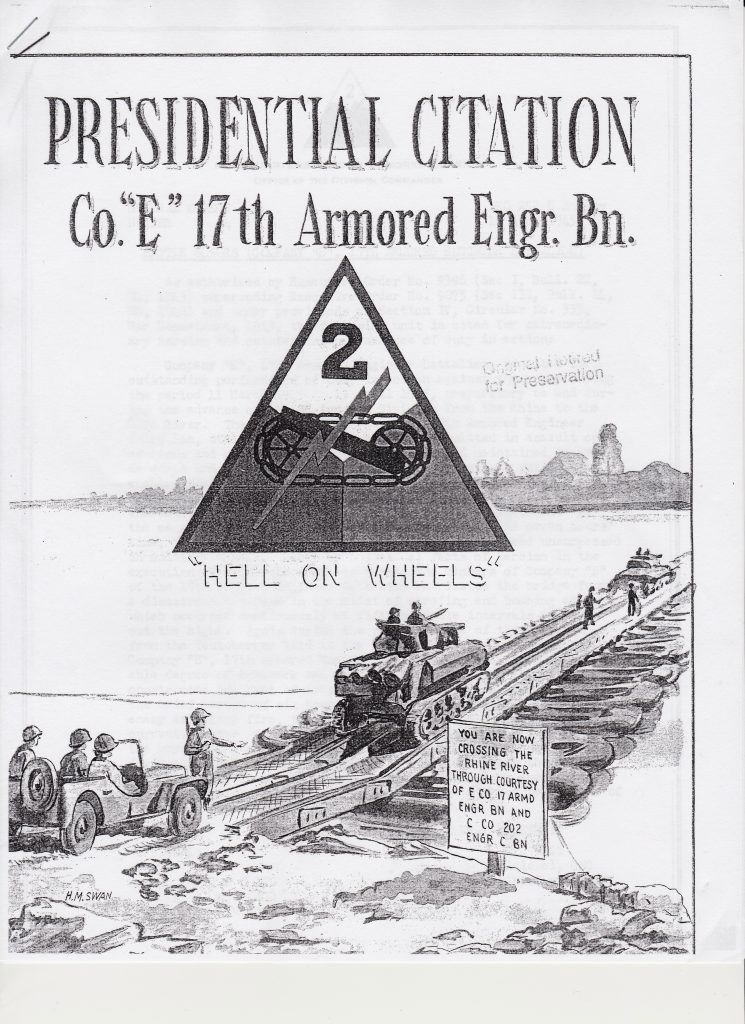 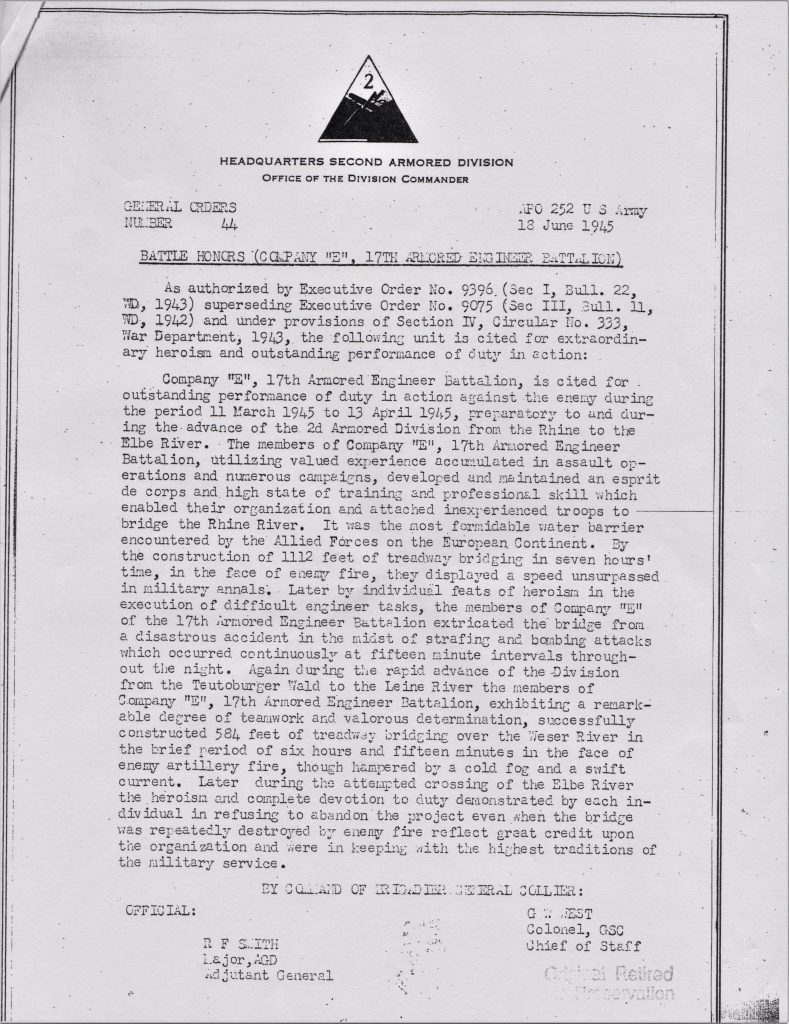 Company E, 17th Armored Engineer Battalion, is cited for outstanding performance of duty in action against the enemy during the period of 11 March to 13 April 1945, preparatory to and during the advance of the 2nd Armored Division from the Rhine to the Elbe River. The members of Company E, 17th Armored Engineer Battalion, utilizing valued experience accumulated in assault operations and numerous campaigns, developed and maintained an esprit de corps and high state of training and professional skill which enabled their organization and attached inexperienced troops to bridge the Rhine River. It was the formidable water barrier encountered by the allied forces on the European Continent.
By the construction of 1,112 feet of Treadway bridging in 7 hours’ time, in the face of enemy fire, they displayed a speed un-surpassing in military annals. Later, by individual feats of heroism in the execution of difficult engineer tasks, the members of Company E, 17th Armored Engineer Battalion, extricated the bridge from its disastrous accident in the midst of strafing and bombing attacks which occurred continuously at 15 minute intervals throughout the night. Again during the rapid advance of the division from the Teutoburger Wald to the Leine River, the members of Company E, 17th Armored Engineer Battalion, exhibiting a remarkable degree of teamwork and valorous determination, successfully constructed 584 feet of Treadway bridge over the Weser River in the brief period of 6 hours and 15 minutes in the face of enemy artillery fire, though hampered by a cold fog and a swift current. Later during the attempted crossing of the Elbe River, the heroism and complete devotion to duty demonstrated by each individual in refusing to abandon the project, even when the bridge was repeatedly destroyed by enemy fire, reflect great credit upon the organization and are in keeping with the highest traditions of military service. . (General Orders 44, Headquarters 2nd Armored Division. 18 June 1945, as approved by the Commanding General, United States Army Forces, European Theater (Main).) 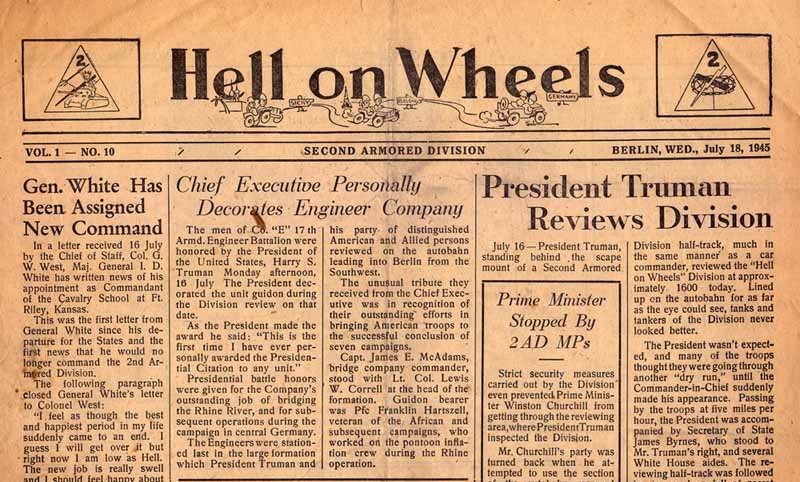 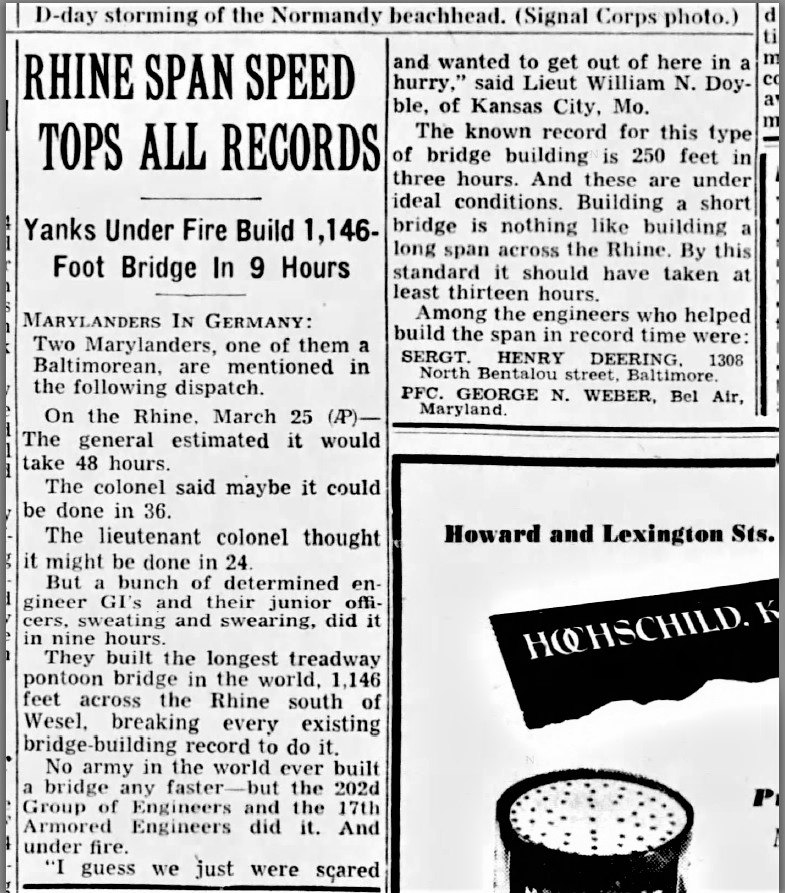 MARYLANDERS IN GERMANY:
Two Marylanders, one of them a Baltimorean, are mentioned in the following dispatch. On the Rhine, March 25.
The general estimated it would take 48 hours. The colonel said maybe it could be done in 36. The lieutenant colonel thought it might be done in 24. But a bunch of determined engineer GI’s and their junior officer sweating and swearing, did it in nine hours. They built the longest treadway pontoon bridge in the world, 1,146 feet across the Rhine south of Wesel, breaking every existing bridge-building record to do it. No army in the world ever built a bridge any faster – but the 202d Group of Engineers and the 17th Armored Engineers didt it. And under fire. “I guess we just were scared and wanted to get out of here in a hurry,” said Lieut William N. Doyble, of Kansas City, Mo. The known record for this type of bridge building is 250 feet in three hours. And these are under ideal conditions. Building a short bridge is nothing like building a long span across the Rhine. By this standard it should have taken at least thirteen hours. Among the engineers who helped build the span in record time were: SERGT. HENRY DEERING. 1308 North Bentalou street. Baltimore. PFC. GEORGE N. WEBER, Bel Air, Maryland.

President Truman’s motorcade stops to review troops of the US 2nd Armored Division, along a German highway (autobahn) while enroute to Berlin. The Presidential party, includes Truman, Secretary of State Byrnes, Brigadier General Collier, Brigadier General Vaughan, Fleet Admiral Leahy, and others. They stand on a platform in an Army reconnaissance vehicle while it passes more a mile of parked tanks and other armor, with respective crews standing in front. President Truman and his party salute as they pass the colors. The Presidential limousine and other vehicles follow the reviewing party. The Presidential party stops as Truman presents a Presidential Unit Citation to Company B, 17th Armored Engineer Battalion. Location: Berlin Germany. Date: July 16, 1945. (Source:www.CriticalPast.com) 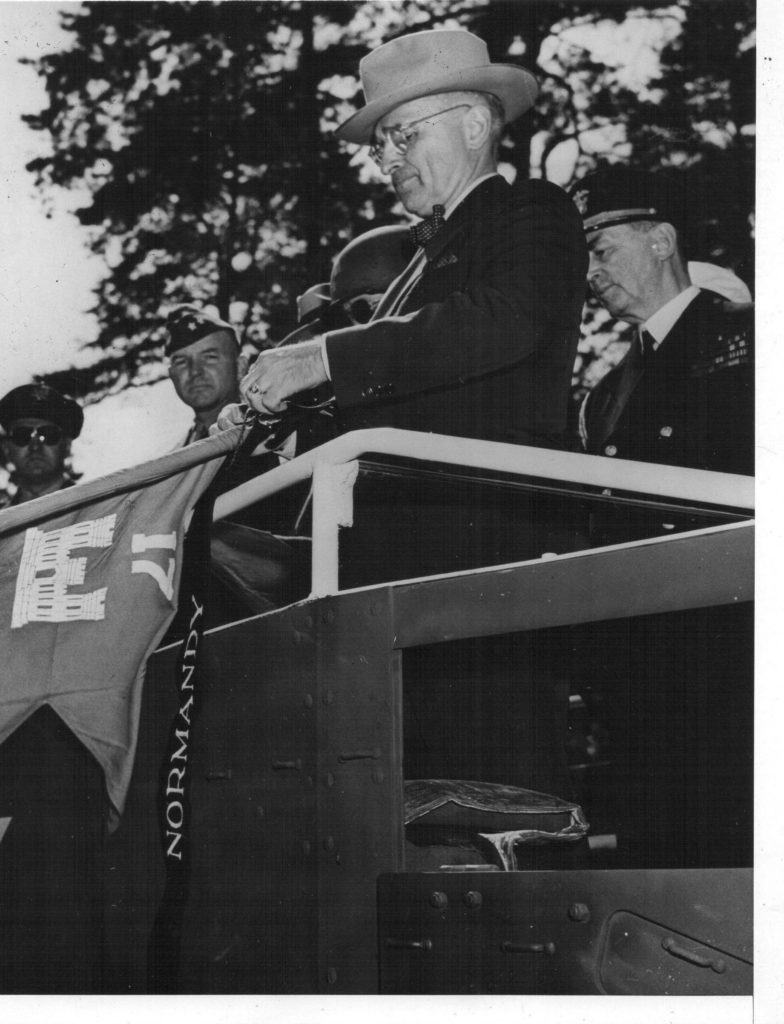 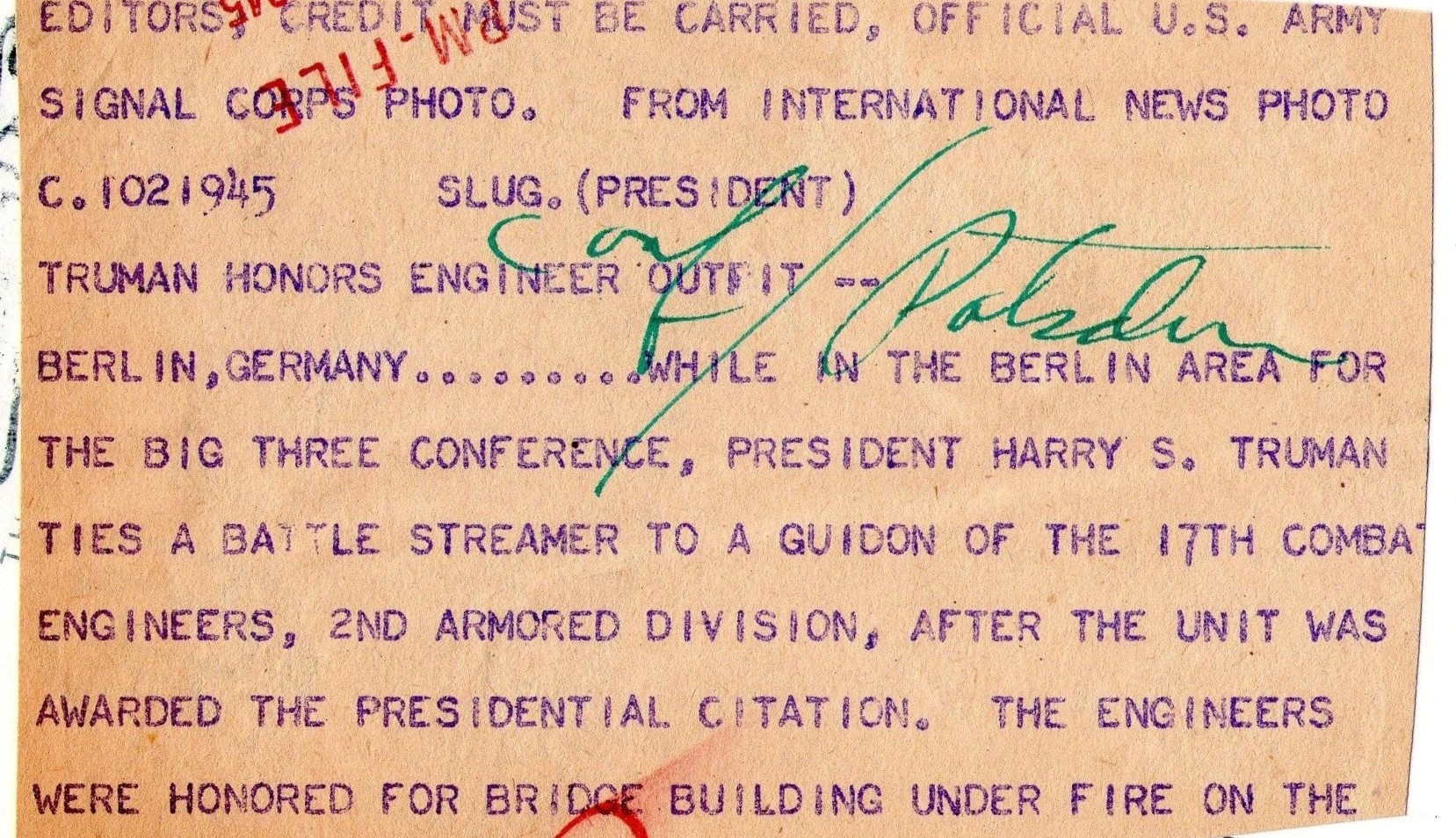 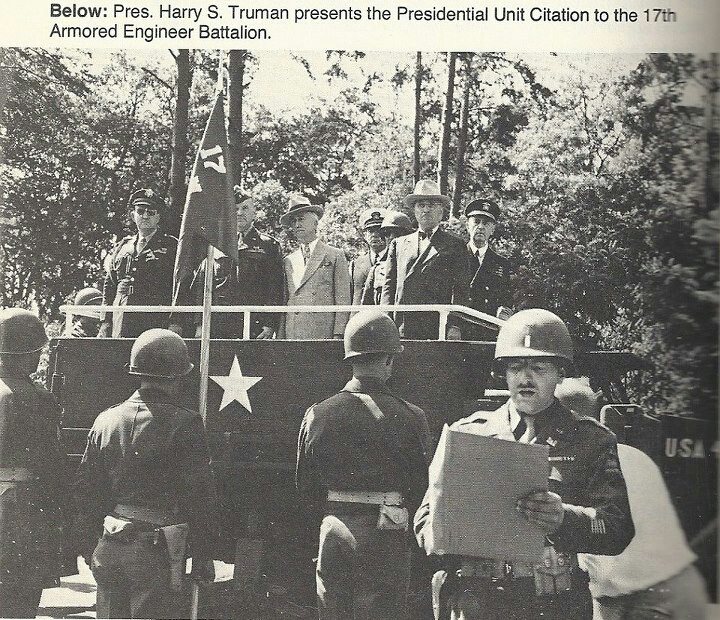 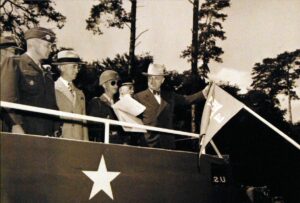 Mr. Truman also conferred with y Secretary of State James F. Byrnes, veteran of the Yalta conference, and – with the President’s chief of staff, t Admiral William D. Leahy. t Stopping outside Hitler’s Chanhcellery, the President shook his head at the destruction and told reporters: “It is a terrible thing, but they  brought it on themselfs”  President Truman, an artillery captain in the last war presented a citation to Company F of the 17th Armored Engineer battalion –which crossed the Rhine under fire—and commented:  “I am only sorry that I didn’t get a chance to participate in some phase of this war myself.” ‘He made the award’ from a half-, track personnel carrier In which he stood with Secretary Byrnes, Ad-miral Leahy, and his military and naval-aides. He wore a blue suit and  the familiar gray hat. He inspected the Second Armored Division in company of its commander, Brigadier General John H. Collier. Then his wide tour of Berlin carried into some sections of the Russian occupation zone.  Passing through the Brandenburg gate, he was saluted by Colonel General Alexander Gorbatov, commander of, Berlin, and by his deputy, Major General Nikolai Barinov. Breadlines The Presidential car was accompanied by a small Secret Service party and a detail of Army riflemen. Major .General _Floyd L.. Parks.. U. S. member of the Berlin kommandatur directed the party through streets of ruined buildings to the KaLserdam, Bismarck strasse, Berlinerstrasse through the Tiergarten. the Grossestrum monument, and Unter Den Linden. The President saw breadlines amid crumbling buildings. Including wreckage of the Reichstag and debris which is all that remains of the • famous Adlon hotel and pictures of himself among the Big Three along a load in the Russian section. Berliners walking the streets or riding bicycles paid little attention to, the procession. • The Second division band played the Star Spangled Banner as President Truman arrived for the Divisional inspection. Baring his gray head to the hot sun, he acknowledged the salutes of the soldiers. Heavy and medium tanks, tankdestroyers and other weapons extended two miles down the highway presented in turn with the emblem of the 17th Armored Engineer Battalion, the President said:  “I’ll take it to the White House and a’ keep it in my office.”………

French Croix de Guerre With Silver Star, awarded under decision No. 246, 15 July 1946 by the president of the Provisional Government of the French Republic, to the 17th Armored Engineer Bn., 2nd Plat. Co. ‘D’ with the following citation:
A unit inspired by the highest sentiments of duty. On 8 August 1944, it was charged with destroying a bridge 5 kms. Back of the enemy lines, in the region of Lonlay l’Abbaye. It accomplished its mission with the most absolute contempt for danger. Finding the bridge occupied, the 2nd Platoon attacked and accomplished its task under enemy fire, evincing the finest qualities of bravery and army disciplines 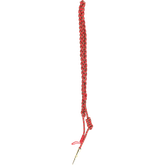 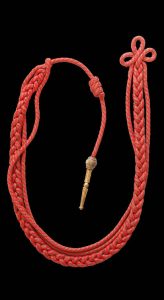 On 2 September 1944, at 0930, its reconnaissance elements crossed the Belgian border near Rume. These were the first American troops to enter Belgium and this marked the beginning of the liberation of the country. The Division fought violently and threw back the enemy on the Albert Canal. This Division liberated the towns of Tournai, Wavre, Tirlemont and Hasselt. 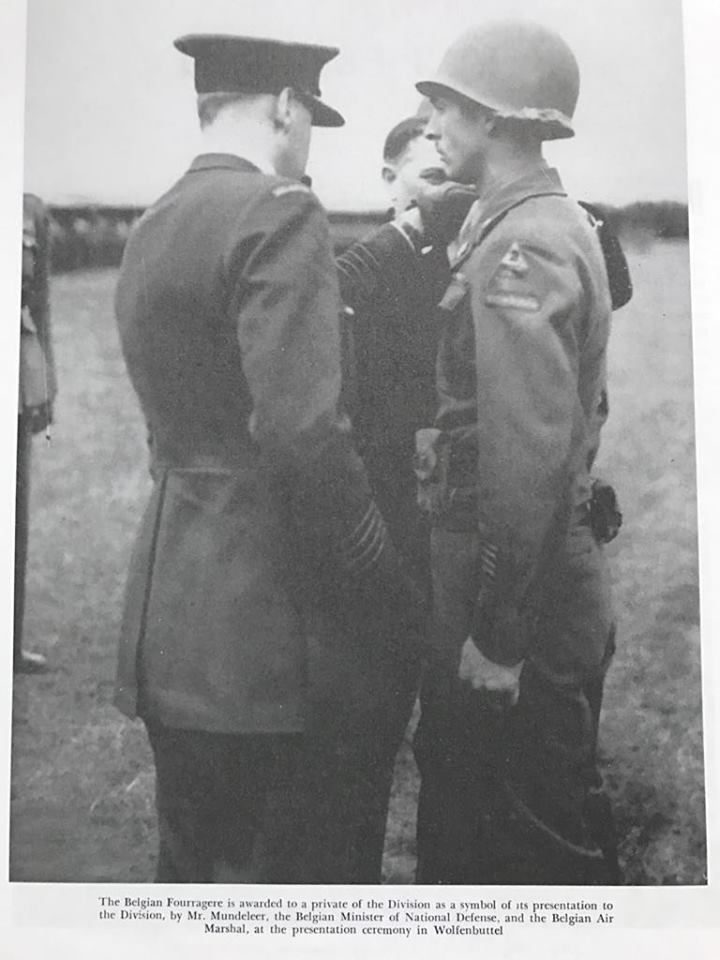 During the German offensive in the Ardennes, in December 1944, the 2d Armored Division was located in Germany, on the banks of the Roer River between Linnich and Julich. On 21 December 1944, it received orders to proceed to the region of Havelange, Avin Clavier.
This movement of more than 100 miles was accomplished in less than 24 hours and on 23 December 1944, the Division established contact with hostile forces at Celles. From the 23d to the 28th of December 1944, violent engagements eveloped in the Celles salient and brought about the total destruction of the spearhead division of the Fifth Panzer Army.
This victory blocked the German advance and prevented it from reaching the Meuse. From thence on, the Division pushed back the enemy forces and, after having retaken many communities of the Ardennes region, it liberated the town of Houffalize. 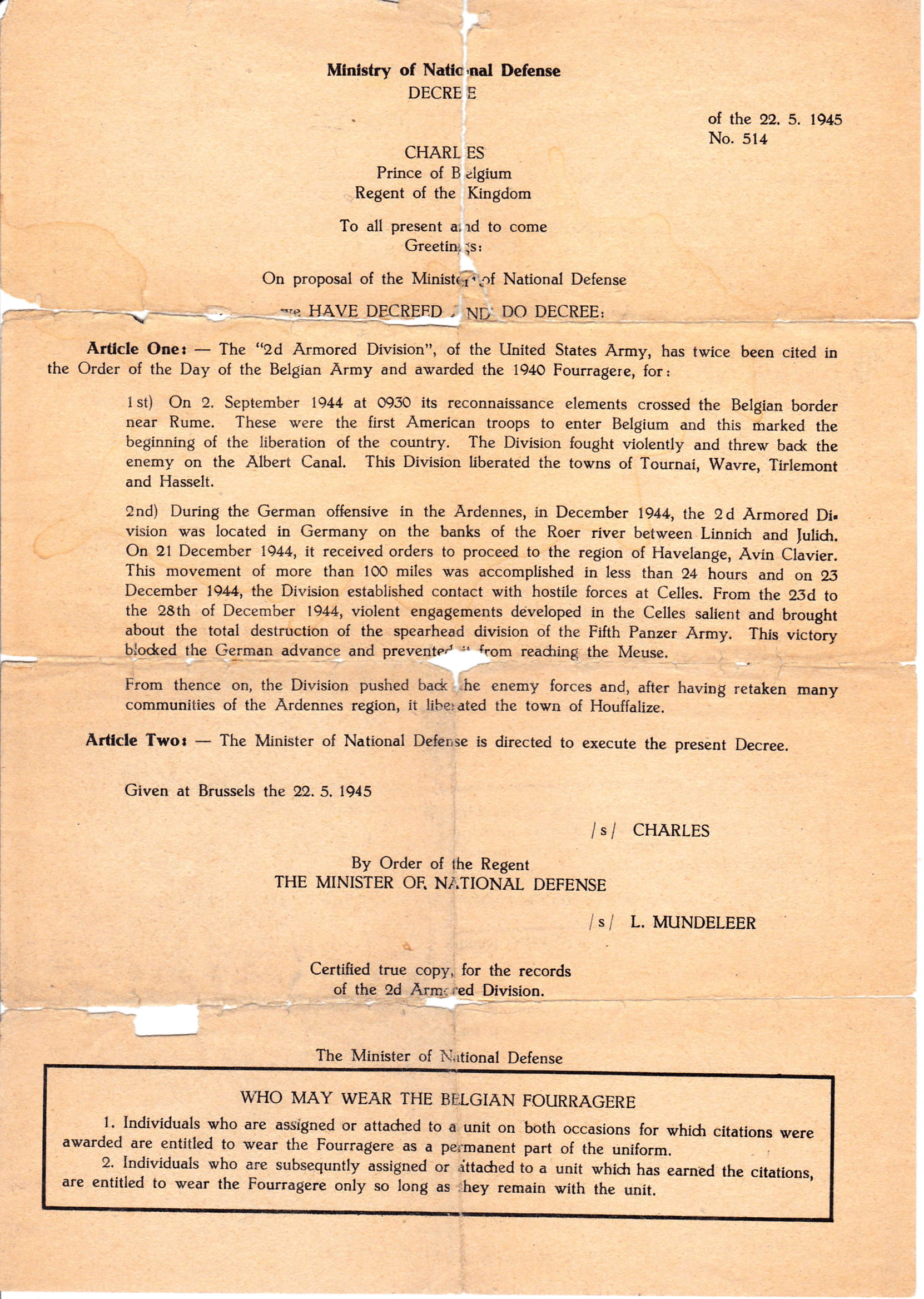 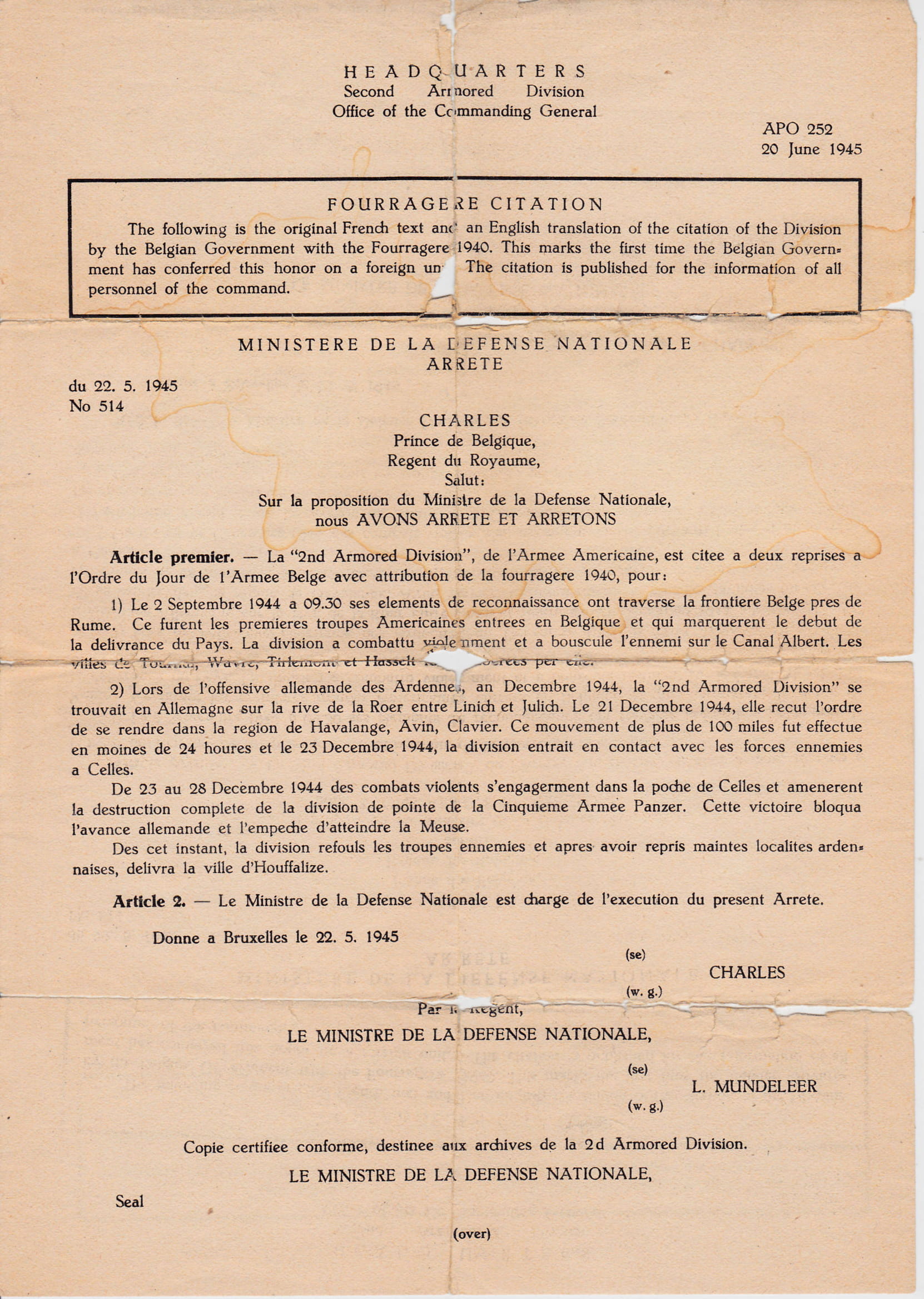 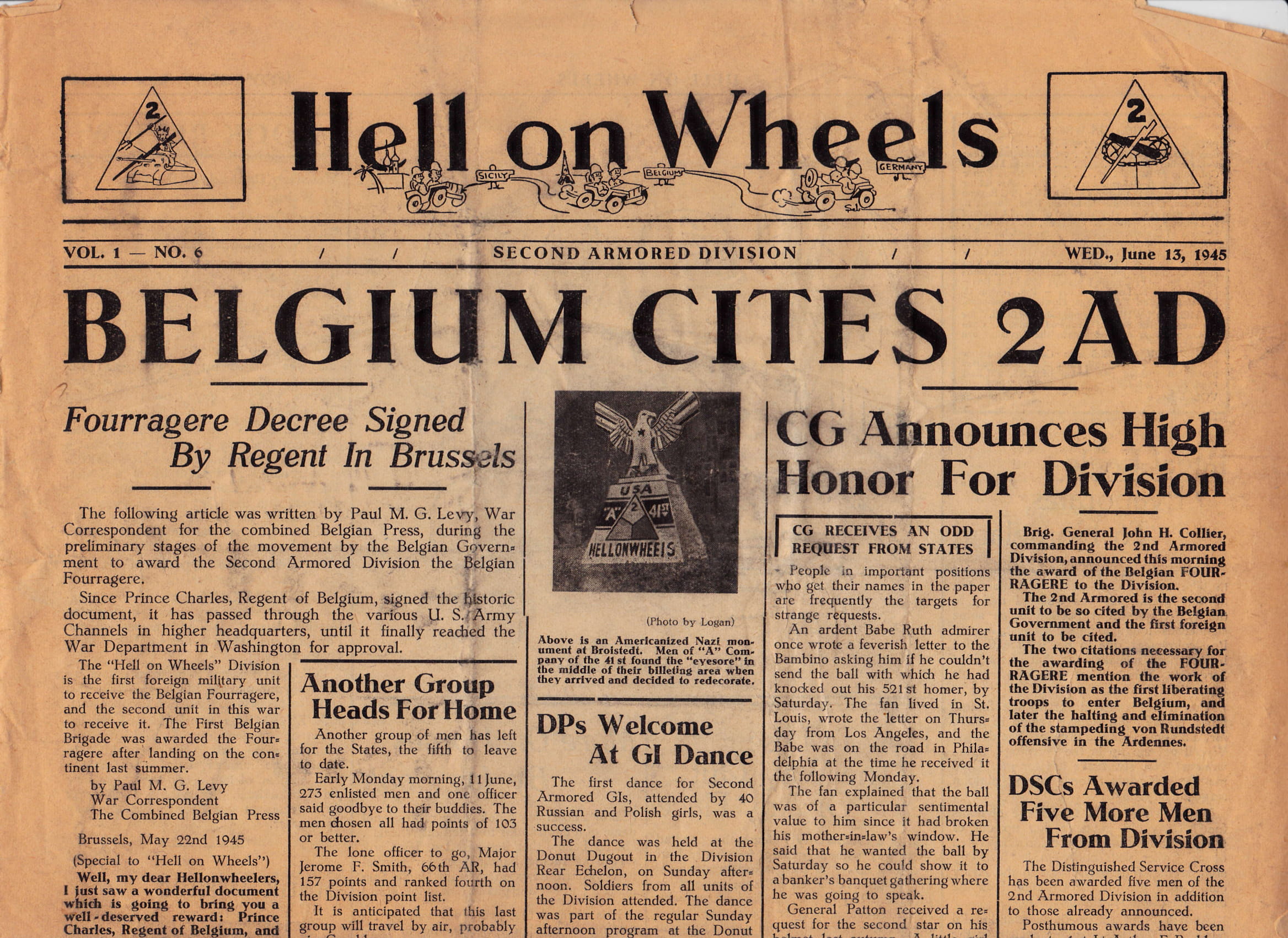 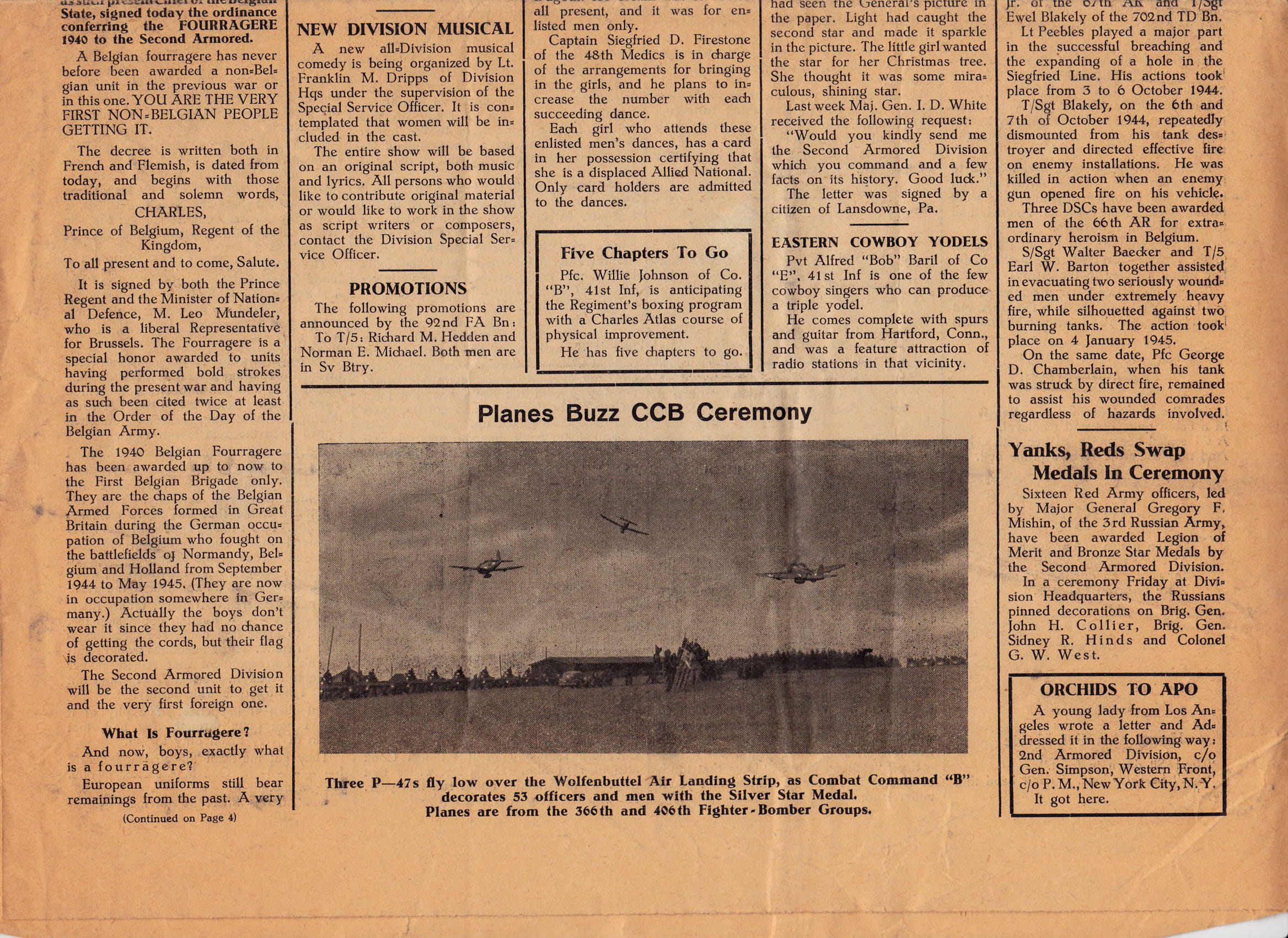 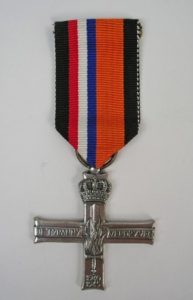 A special medal was awarded to the 2nd Armored Division on October 6, 1982, in Washington, DC, by the Netherlands Government; represented by Dr. J. H. Lubbers, the Netherlands Ambassador to the USA. In attendance was the Secretary of the Army, John O. Marsh, Jr. The medal, The Netherlands National Resistance Cross, was awarded to the 2nd Armored Division for its participation in the liberation of Holland from Nazi occupation. Only two other American Army divisions, the 82nd Airborne and the 101st Airborne were awarded this honor. 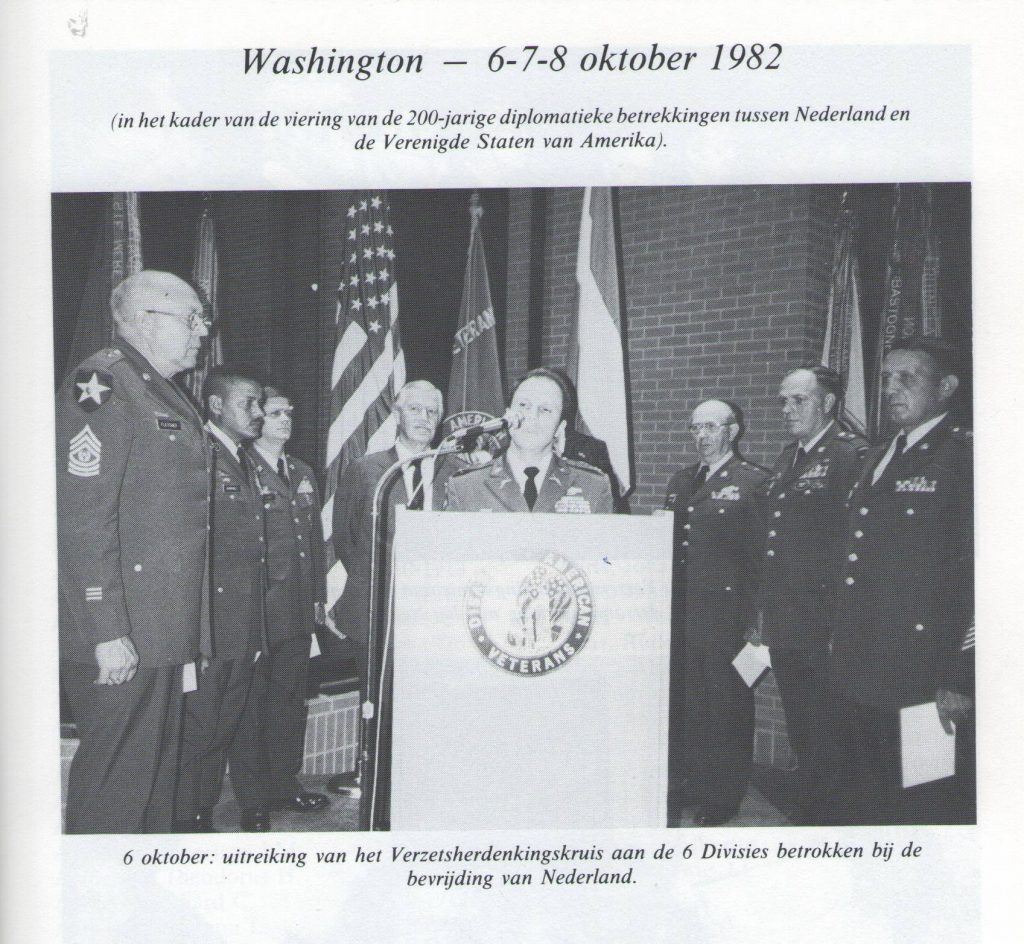 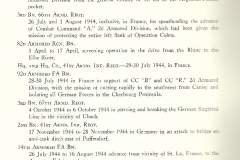 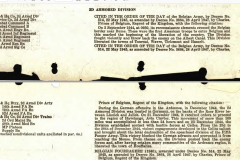 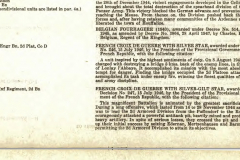 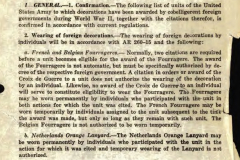 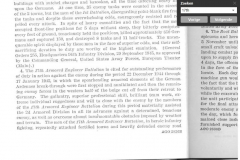 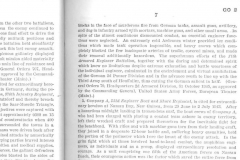 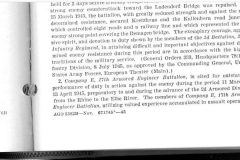 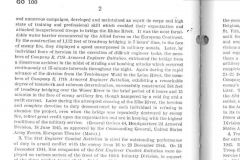 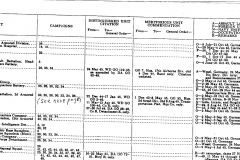 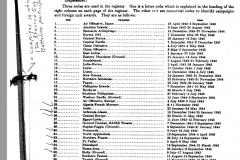