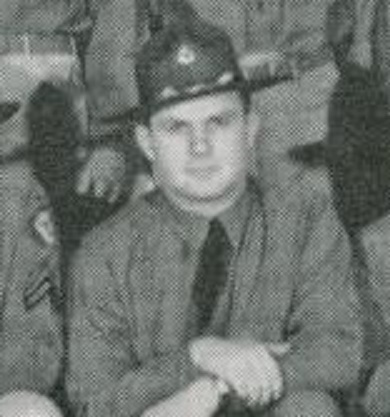 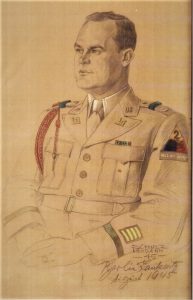 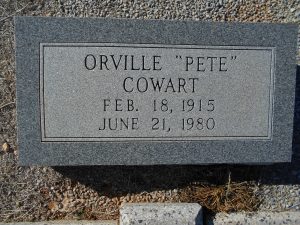 Orville Pete Cowart started his career in the 142nd Infantry, Company F, there is a photograph of his unit. 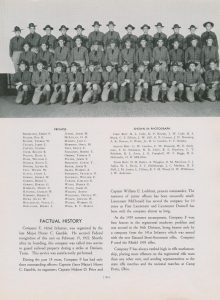 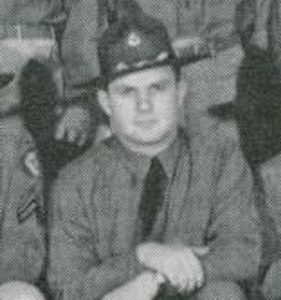 Company F, 142nd Infantry, was organized by the late Major Henry C. Gamble. He secured Federal recognition of this unit on February 15, 1922. Shortly after its founding, this company was called into service to guard railroad property during a strike at Denison, Texas. This service was satisfactorily performed. During the past 18 years, Company F has had only three commanding officers: Captain (later Major) Henry C. Gamble, its organizer; Captain Hubert 0. Price.

Information by his son Jim Cowart

He joined the Division literally on Omaha Beach as he arrived ahead of most of it in command of a 44 man replacement packet of personnel.  (44 men = capacity of 2 LCVPs)  They were scheduled to be part of the 8th(?) wave onto the beach and expected to land about 5 PM, but due to the delays on Omaha, they didn’t get in until about 1 AM on D+1.  He went about assigning his men to replace casualties in other units, and became the last one.  The 17th Engineers started landing on D+1 and had an officer casualty (the officer was injured).  As he was a qualified engineer, he assigned himself to them.

LT Oriville Cowart and his replacement packet crossed the channel on a ‘troop ship’ that mostly contained the 29th infantry.  He talked about the seasickness they all had as they waited offshore for the initial waves to establish the beachhead.  His RP boarded a pair of LCVP’s around midnight, milled around in the ocean for a while, and got to the beach at 1 or 2 AM.  Due to the high level of casualties on Omaha (relative to all the other beaches) he had no problem assigning out his men, and was finished doing so by mid-afternoon.  One of the problems I remember his discussing was that of getting his report, containing the details of the reassignments, off the beach and back to some HQ.  The few radios that were working were not available for ‘administrative’ functions.  So he ended up sending it with a medic who was returning wounded to a ship in the channel.  [No job is finished until the paperwork is done, right?]  I have no idea to what units his other men were assigned, but a reasonable working assumption is that most would have gone into either the 1st or 29th infantry divisions as they were the principal assault divisions on Omaha.

During the fighting, and due to the shortage of officers, he moved from Company B to Company D to Company E during his time in WW2.  He was part of Combat Command A from Normandy through the crossing of the Seine, and Combat Command B mostly thereafter.

Company E, his assignment for the last few months, was nominally part of the Div HQ and they were sent out as needed.  In Company E, when the Division got to Magedeburg, they built a bridge over the Elbe just north of the city, rebuilt it the next day after it was shelled, and then a day later moved south of town and built a second bridge over the Elbe.  Across that bridge was pushed the 82nd Recon Battalion, and other elements of the 2nd Armored, to form a bridgehead.  From that bridgehead, they ran several reconnaissance in force patrols with many going all the way into Berlin from the West.  In more than one of those patrols, they were offered the surrender of Berlin by one officer or another, but there were strict orders that Berlin had to be surrendered to the Russians (who were attacking from the East).  They did haul out many convoys of intelligence material and high ranking POWs. 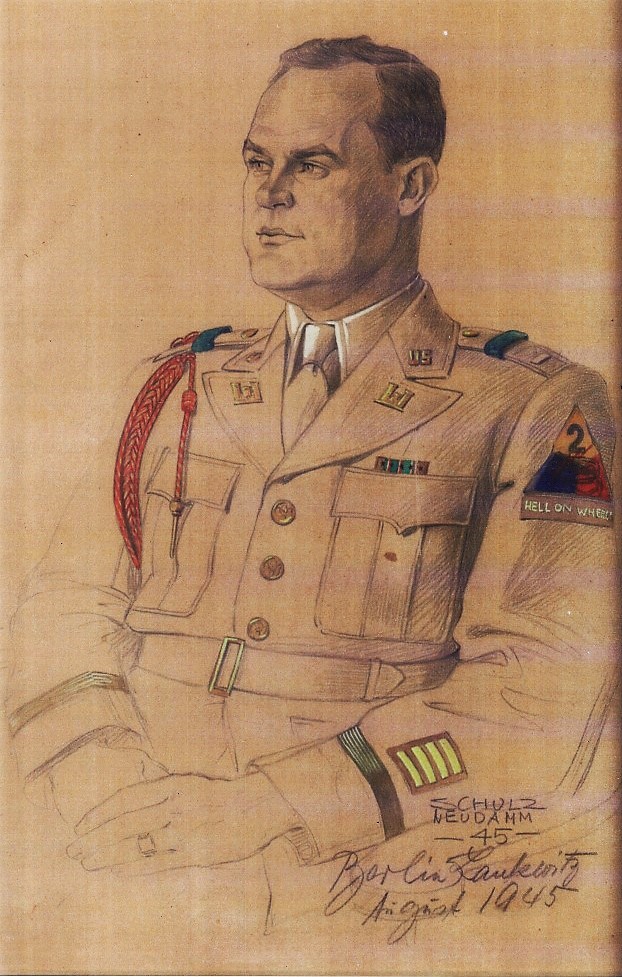 Most the WW2 memorabilia of Orville Cowart was lost in a fire 15 or so years ago.  But one thing remains ,it is a drawing of him done by a German officer who they took out of Berlin on one of the “reconnaissance in force” patrols they ran into Berlin.  He was an artist, and did the picture of my father as a ‘thank-you’ for taking him as a POW before the Russians arrived.  On that same trip they took ‘several’ truck loads of material from the Wehrmacht plans and maps center.

About the colorpencil drawing

It is truly a special portret, by its Art Deco Style, the name of the artist, the situation and timeperiod. And offcourse the circumstances in that Heinz Schulz-Neudamm made the portrait.
The service jacket that Lieutenant Cowart is wearing is a perfect example for at late war (august 1945). We see  his ETO Ribbon with 5 campaign stars, the Belgium Fourragere, the green combat Leadership tabs on the shoulder loops, the Engineer Crests on the revers, and the “Hell on Wheels” tabs under the 2nd Armored patch. He was a Lieutenant First Class as can be seen on the shoulder tabs. On the cuffs 4 overseas service stripes.

Below the signing Shulz-neumann wrote the place he made it, “Berlin, Lankwitz“. Lankwitz is situated in the southern suburb of Berlin. It is normal in Europe that you mention the suburb in a big city. . https://en.wikipedia.org/wiki/Lankwitz

Heinz Schulz-Neudamm (born 7 July 1899 in Neudamm, Königsberg, Neumark, May 13, 1969 in Wiesbaden) was a German graphic artist and illustrator.
Schulz, who named himself after his place of birth, Schulz-Neudamm, developed numerous advertising designs for various film companies, such as Tagebuch Verlorsen (1929) or inherited instincts (1929), until the 1940s. However, he mainly worked for German agencies of American rental companies, including Deutsche Fox (later the 20th Century Fox), Deutsche Universal Film AG, Parufamet and Metro-Goldwyn-Mayer. He created predominantly German premiere films on American feature films, for example to Anna Karenina (1935, with Greta Garbo) and mutiny on the Bounty / Mutiny On The Bounty (1935, with Charles Laughton and Clark Gable).
Schulz-Neudamm was responsible for the design of the ParUFAMet press and the Paramount journal. He also designed illustrations, including portrait sketches for the magazine Filmillustrierte. Since the beginning of the 1950s, Schulz-Neudamm lived in Wiesbaden, where he continued to work for the film industry, including the United Artists.
The original poster for the film classics Metropolis was sold in London in November 2005 for a record price of £ 398,000.

Metropolis, by director Fritz Lang (1890–1976), is generally regarded as a masterpiece of German Expressionist filmmaking and a forerunner of modern science-fiction movies. The film was shot in 1925–26 at the Babelsberg (Berlin) studios of the leading German film company, Universum Film AG (Ufa), and premiered in Berlin in January 1927. This 1926 art-deco poster by German graphic artist and painter Heinz Schulz-Neudamm (1899–1969) was created for the premiere. Only four copies of Schulz-Neudamm’s poster are known to exist, one of which was sold in London in 2005 for a record price of ₤398,000, making it the most expensive poster in the world.

As a refrence of the artists achievement,  the artist Heinz Schulz-Neudamm once made portrait about “von Hindenburg” in 1933. 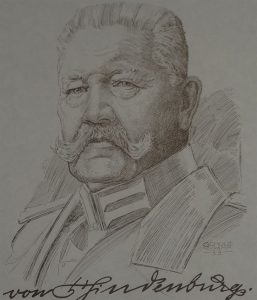 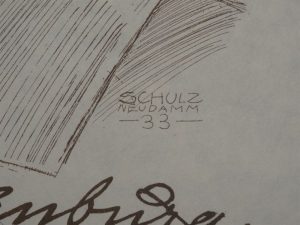 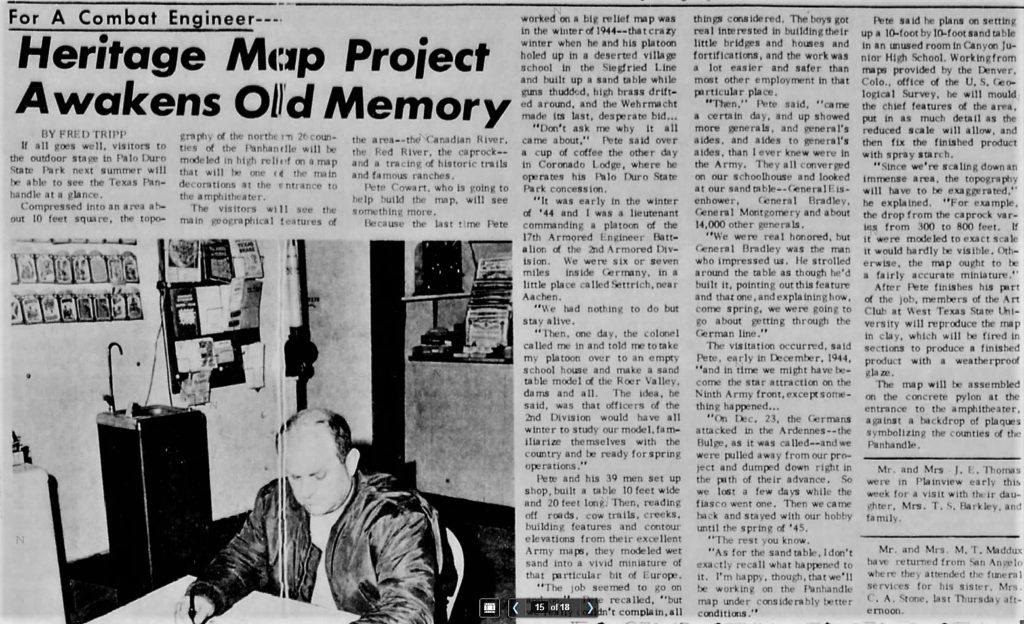 If all goes well visitors to the outdoor stage In Palo Duro State Park next summer will be able to see the Texas Pan-handle at a glance. Compressed into an area about 10 feet square, the topography of the north ten 26 coun-ties of the Panhandle will be modeled In high rellief on a map that will be one (4 the main decorations at the c nuance to the amphitheater. The visitors will see the main geographical features of the area the Canadian River, the Red River, the caprock–and a tracing of historic trails and famous ranches. Pete Cowart, who is going to help build the map, will see something more. Because the last time Pete worked on a big relief map was in the whiter of 1944–that crazy winter when he and his platoon holed up in a deserted village school in the Siegfried Line and built up a sand table while guns thudded, high brass drift-ed around, and the Wehrmacht made its last, desperate bid… “Don’t ask me why it all came about,” Pete said over a cup of coffee the other day in Coronado Lodge, where he operates his Palo Duro State Park concession. “It was early in the winter at ’44 and I was a lieutenant commanding a platoon of the 17th Armored Engineer Battalion of the 2nd Armored Division. We were six or seven miles inside Germany, in a little place called Settrich, near Aachen. “We had nothing to do but stay alive. “Then, one day, the colonel called me in and told me totake my platoon over to an empty school house and make a sand table model of the Roer Valley, dams and all. The idea, he said, was that officers of the 2nd Division would have all winter to study our model, familiarize themselves with the country and be ready for spring operations.” Pete and his 39 men set up shop, built a table 10 feet wide and 20 feet long; Then, reading off roads, cow trails, creeks, building features and contour elevations from their excellent Army maps, they modeled wet sand into a vivid miniature of that particulair bit of Europe. “The job seemed to go on and on Peter recalled, “but didn’t complain, all things considered. The boys got real interested in buildingtheir little bridges and houses and fortifications, and the work was a lot easier and safer than most other employment in that particular place. “Then,” Pete said, “came a certain day, and up showed more generals, and general’s aides, and aides to general’s aides, than l ever knew were in the Army. They all converged on our schoolhouse and looked at our sand table–General Eisenhower, General Bradley, General Montgomery and about 14,000 other generals. “We were real honored, but General Bradley was the man who impressed us. He strolled around the table as though he’d built it, pointing out this feature and that one, andexplaining how, come spring, we were going to go about getting through the German line.” The visitation occurred, said Pete, early in December, 1944. “and in time we might have have come the star attraction on the Ninth Army front, except somnething happened… “On Dec. 23, the Germans attacked in the Ardennes–the Bulge, as it was called—and we were pulled away from our project and dumped down right In the path of their advance. So we lost a few days while the fiasco went one. Then we came back and stayed with our hobby until the spring of ’45. “The rest you know. “As for the sand table, ;don’t exactly recall what happened to it. I’m happy, though, that we’ll be working on the Panhandle map under considerably better conditions.” Pete said he plans on setting up a 10-foot by l0-foot sand table in an unused room In Canyon Junior High School. Working from maps provided by the Denver. Colo. office of the U. S. Ecological Survey, he will mould the chief features of the area, put in as much detail as the reduced scale will allow, and then fix the finished product with spray starch. “Since we’re scaling down an immense area, the topography will have to be exaggerated.” he explained. “For example, the drop from the caprock varies from 300 to 800 feet, if it were modeled to exact scale it would hardly be visible. Oth-erwise, the map ought to be a fairly accurate miniature.” After Pete finishes his part of the job, members of the Art Club at West Texas State University will reproduce the map in clay, which will be fired in sections to produce a finished product with a weatherproof glare. The map will be assembled on the concrete pylon at the entrance to the amphitheater, against a backdrop of plaques symbolizing the counties of the Panhandle.

Thanks to the help of Jim Cowart.
Research and written by Martijn Brandjes