Where was PFC Albert Clark killed in action?

Companies crossed the Weser in combat colomns 6 April and proceeded on the march generally towards Hildesheim. Enemy planes were active on several occasions, Company “A” reporting strafing at Shulenberg and Co. “C” at Elze and Escherde. Company “A” was given instructions to build a bridge over the Zwikanal at Hildeshiem 8 April at 1730 and worked,  again with Co, “B” until 1000 the next day when a change in plans called off the operation Co. “B” removed the 114 foot bridge on 10 April.
During this part of the drive the division was pushing so fast that the Infantry which was to take over the captured territory could not keep up. Our own Infantry was being used to guard stores of material, military hospitals and other Installations, and this job finally passed to the Engineers. Co. “C” on leaving Binder 10 April left two full Platoons and the Engr section guarding a variety of warehouses, loaded box cars, a hospital, at seven different locations, and two days later, with the 1st Platoon on road block duty at Maderndoheliben, near Magdeburg, even the mess section was called on to guard a captured hospital in that town. The first casualties of the campaign, were suffered by Company “A” when two men were killed 10 April from enemy artillery air bursts at Lichtenberg .

The 17th Armored Engineer Battalion Unit History clearly states that there were two men killed on the 10th of April, so one of them must have been Albert F Clark who probably died by artillery air bursts at Lichtenberg Germany. The other Engineer was killed that day was Private George H Davisson.
At a online interview in may 2017 with the Veteran Mr Francis C. Turner told he was the senior Officer of the platoon where Davisson and Clark were part of.
He recalled the day that both men were killed, he said they were killed by High Explosive 88mm German artillery shell that killed them instantly.
Later that day he would do his actions where he earned his Silver Star. (Source: skype interview on may 2017 with Martijn Brandjes and Francis C, Turner.)

Edit 1 : On the 10th of April Lieutenant Francis Turner was awarded the Silver star for an operation of Company A, with two men killed (and two wounded)
For more information: Veteran Mr Francis C. Turner.

Location where PFC Albert Clark was killed in action:

The household in the year 1940 of Albert F Clark with the family, where he lived as an 21 year old “Loader”: 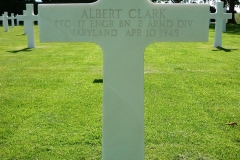 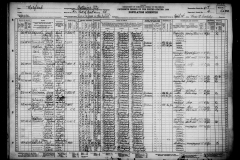 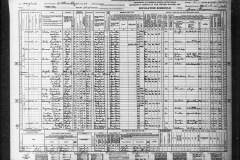