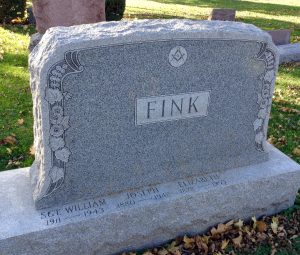 Staffsergeant, platoonsergeant William Fink was awarded the Silver Star Medal for his action around the 9th of november 1943, during the phase THE NORTH AFRICAN CAMPAIGN

Probably the stiffest opposition was encountered at Port Lyautey, 80 miles North of Casablanca, where men from the 9th Infantry Division landed and took the fort which overlooked the harbour with little trouble.
Lt. Meredyth Hazzerd’s platoon from Co. “B” went ashore and spent the first afternoon and night unloading ammunition. Lt. Dill Christian, whose Co. “C” platoon also was to land, came ashore with his jeep and one squad of men. But the others were told to remain aboard and later unloaded at Casablanca.
Likewise, Lt. Turners Co. “D” platoon, their ship torpedoed, were turned back and landed a few days later at Casablanca. During the night of 9 November the enemy made a strong counterattack on the fort, retook it, and Lt. Hazzard’s platoon was alerted to act as Infantry in another assault on the fortress. Working on the left flank of the attacking force, the platoon helped to capture a Tug boat sitting in the river, then scaled the walls in face of heavy small arms fire, and wnet with the infantry into the fort where the French garrison of 300 surrendered. The Force was reorganised, and the Engineers joined in the job of cleaning out a nearby native village of snipers, during which Pvt Richardson was wounded while trying to capture an enemy machine gun nest. With the village cleared the force moved to high ground overlooking an airfield, where Engineers dug in defensive positions and remained until the truce was signed. Both Lt. Hazzard and Staffsergeant Fink, the platoon Sergeant, as well as Pvt Richardson were awarded the Silver Star for their actions during this engagement. The platoon had captured at least 100 PW’s.

Where was Staffsergeant William Fink killed:

The capture of Palermo ended the fighting in western Sicily. A short campaign, the division with its aggressiveness and speed as well as the lack of enthusiasm with which the enemy defended their rocky island captured its objective ahead of schedule, and the troops that took an active part in the campaign moved into a rest and training area to the east of Palermo. Companies  “A” and  “B”  of the Engineers entered an olive grove bivouac west of Capaci 26 July, where a provisional battalion was set up under Lt Col. John Chambers.

During the next month companies were busy removing and exploding mines from numerous minefields – one of more than 700 mines being lifted by Co. “A” on the Capaci Torretta road. Road reconnaissance, the preparation of road bypasses, the construction of PW cages and assistance in preparing & divisional cemetery were among the tasks assigned. S/Sgt William Fink of Co. “B” was accidently killed when a captured German motorcycle he was riding threw him under a heavy truck near Corleone on 12 August 1943.
Swimming was enjoyed off the coast during the afternoons, for warm weather remained as Autumn grew older.

Staffsergeant William Fink died during a unfortunate accident with the German Motorcycle, apparently not during a mission or a battle. He was riding the motorcycle on his own time what is the reason that he was offcialy noted as “Died-Non-Battle”. 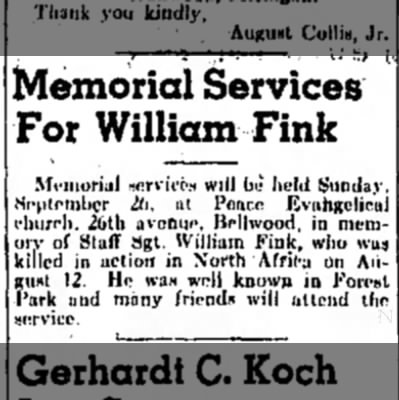 (NOTE: de article states he was Killed in Action in North Africa. That is not correct, he Died-non battle in Sicily.)

Location where Staffsergeant William Fink died during an accident with a captured German Motorcycle:

The location where William Fink lived with his parents Joseph and Elizabeth, as an 28 year old “Bricklayer”:

Father Joseph Fink was a Building Contracter and his son was a Bricklayer at a steam railroad company (it was not correct noted at the nameline of Elisabeth).
When William enlisted in 1941 we know he was a carpenter.