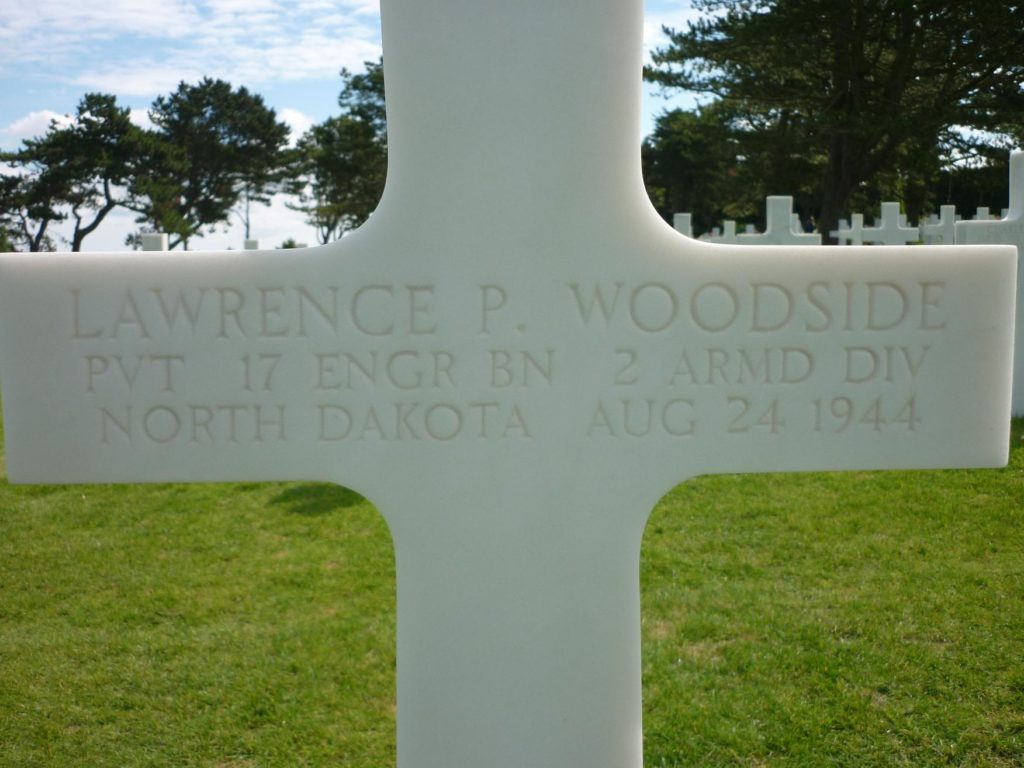 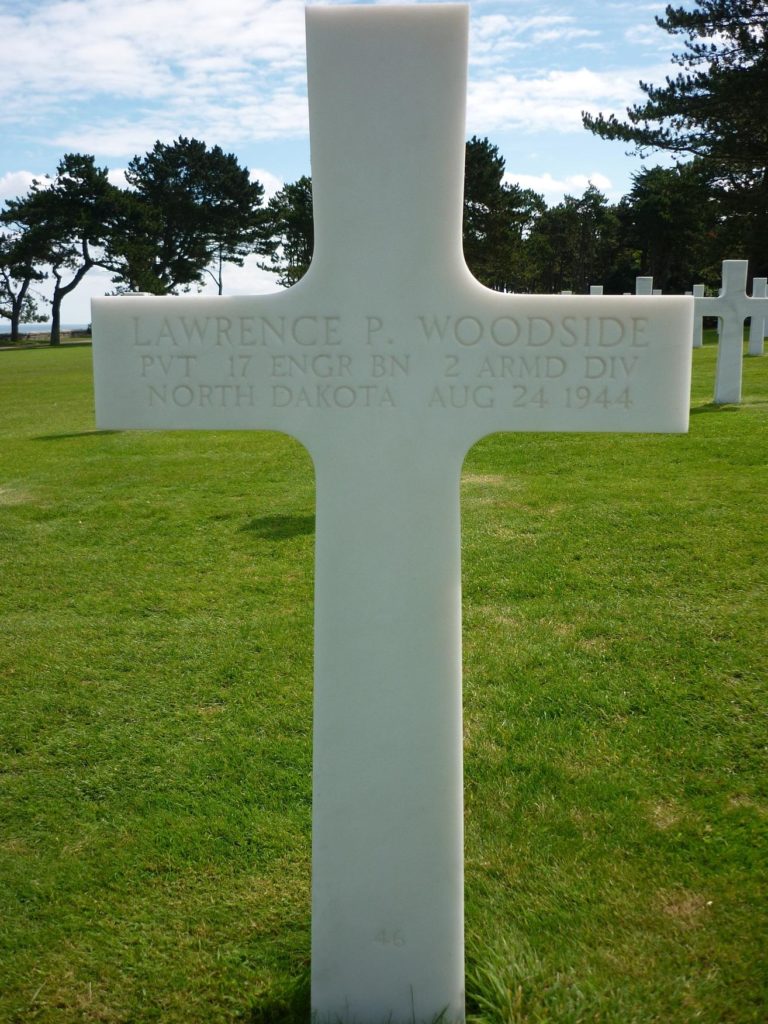 Where was Private Lawrence P Woodside killed in action?

—–On August 8, the division moved along two routes, with Command A on the south and Combat Command B on the north. After spending the first night at Sees. they then proceeded to assembly areas about five miles from Nlortagne-au-Perche, covering ninety-nine miles in two days. While passing through Sees, the division halted to permit the 2d Armored Protoge (French armored division) to pass on its way to attack and later capture Paris. In their new assembly area. the Hell-on-Wheelers sent out patrols to make contact with the enemy, but none was located. The division prepared to launch attacks northward to seize crossings over the Seine and to prevent the Germans using them to escape back to their lines . XIX Corps on the left of the Eure River, with X Ny Corps on the right, planned to attack northward. capturing the Seine crossings at Elbeuf. The attack, to be led by the 113th Cavalry Group and the 30th Infantry Division, was to be followed rapidly by the 2d Armored and 28th Infantry Divisions. The leading divisions were ordered to bypass towns for the following infantry to clear. The attack was launched on August 20. at 8:00 A.M., with combat commands abreast: Combat Command on the right and Combat Command B on the left. Initially division reserve followed Combat Command B. Instead of leading with an infantry division sup-porting the 113th Cavalry Group. the formation was the same as in the first exercise in the Louisiana maneuvers. The 2nd Armored was in the center, with the 28th Infantry on the left flank and the 30th Infantry on the right flank.—-

Collier had Com. hat Command A in two columns. The left one cut the road between Le Neubourg and Elbeuf. preventing the Germans’ using it to get their re-treatino forces to the crossings on the Seine. The other column moved to about a mile south of Elbeuf where it encountered dug-in tanks and antitank gun fire. The command stopped consolidated their positions and planned to assault the town the next day. Combat Command B, attacking in the left portion of the division zone cut the Conches-Le Neubourg road and the Le Neubourg-Iniville road. The 3d Battalion. 67th Armor, while moving to cut the road from Iniville encountered heavy tank fire and quickly lost three tanks cleverly hidden German tank. The battalion pulled back, deployed for action and called for tank destroyers and a heavy artillery barrage heir clean out the enemy. T During the day, Combat Command B. had isolated the town of Elbeuf, while Combat Command A moved forward to attack Elbeuf the following day.

—During the night a light rain began falling, and the Luftwaffe, apparently trying to aid their trapped forces, sent bombers to attack Elbeuf.  From the 2d Armored’s point of view, the attack was a success because the bombers again missed the Americans and hit the German positions. The amount of damage and casualties was unknown, but thought to be extensive. At 8:00 A.M. Collier began the attack to capture the crossings over the Seine River at Elbeuf. One column moving along the Le Neubourg-Elheuf highway met minimal resistance, while the column that had reached a point about a mile south of town the previous evening encountered almost impossible terrain, made even worse by the rain, strongly dug-in tanks and antitank guns supported by artillery. The attackers reached the outskirts of the town but suspended further action. Pending the arrival of reinforcements. Combat Command B had been ordered to attack from the southwest to support the advance of Combat Command A. The 3d Battalion, 67th Armor, encountered enemy fire about a mile south of their objective of Tour la Champagne. The commander sent scouts ahead to find the location of the enemy guns and to determine if the town were defended. The attack order was given, and about 3:30 P.m. Americans entered the town against slight resistance. Enemy opposition was beginning to fade in spite of the defense offered at Elbeuf. The Germans were more interested in retreating than defending the crossing sites. At 11:00 P.M., Combat Command A re-newed its attack with the intent of clearing the town and securing the river crossings. With three columns advancing, Collier had his forces in the city by nightfall and was prepared to continue the attack the following morning. All day the men had endured artillery, mortar, antitank and nebelwerfer fire which, while slowing them down, did not stop their assault. During the fight, the 82d Reconnaissance Battalion had captured several Germans who stated that their mission was to hold the Americans south of town while the bulk of the retreating Germans crossed the river.

Location where Private Lawrence P Woodside  was killed in actions on the 24th of august 1944: 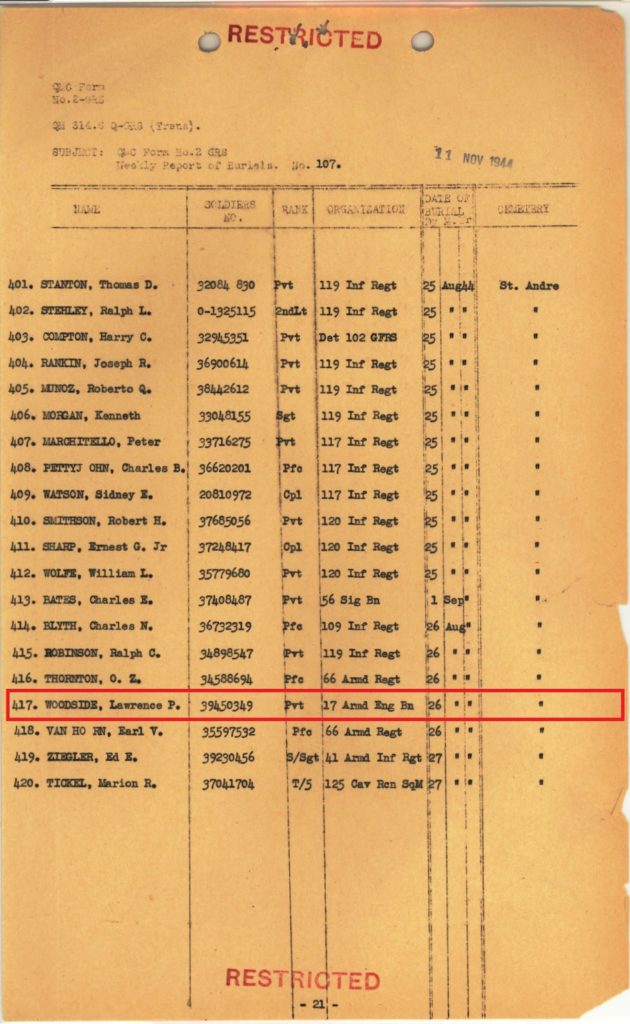 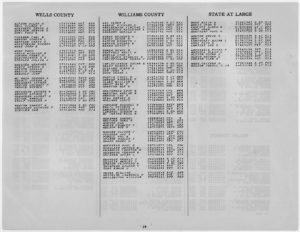 The location of the street in the year 1930 where Private Lawrence P Woodside  lived with the family, as an 11 year old boy:
Adress: Tallman Street, Alamo, ND 58830 United States 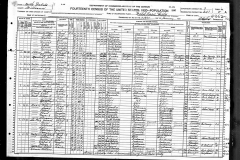 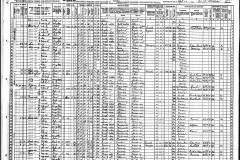 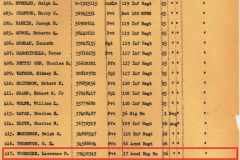 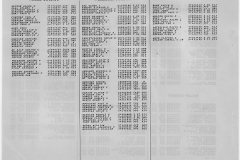 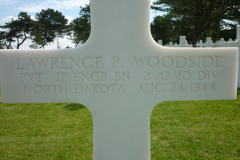 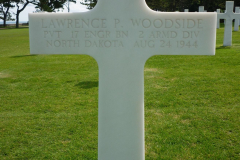